The Philadelphia Flyers have fired coach Dave Hakstol, with the team having lost 11 of its last 14 games. 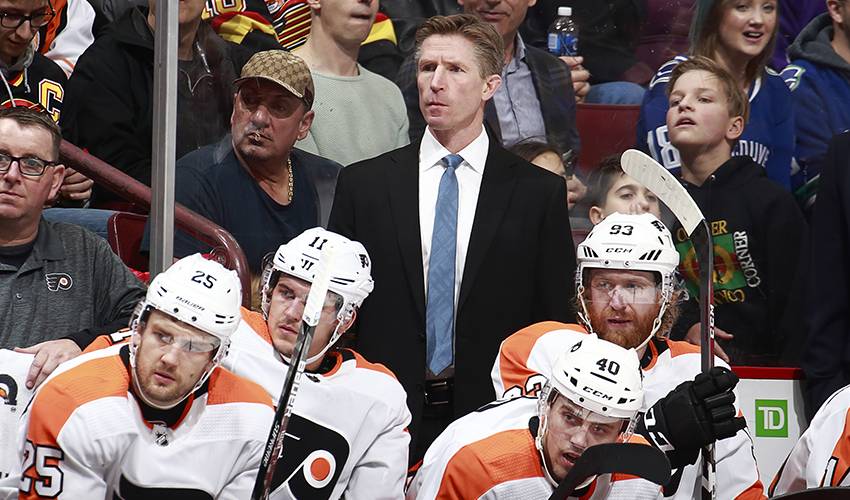 It took less than two weeks as general manager of the Philadelphia Flyers for Chuck Fletcher to see what he needed to see with coach Dave Hakstol.

The Flyers were still making too many mistakes, still not playing up to their talent level and it was all too clear the message wasn't getting across from their fourth-year coach. With the team mired in a four-game losing streak, Fletcher fired Hakstol on Monday and named Scott Gordon as interim replacement.

"To my eyes there was a disconnect between what he was preaching and how the players were playing," Fletcher said. "We need a new voice. We need to have the coaching staff (give) the message to the players and hopefully have the players receive that message and that's why I decided to make the move."

Not much has improved since the team fired general manager Ron Hextall just after Thanksgiving. The Flyers have lost five of six, 11 of 14 and are in last place in the Eastern Conference. They went 1-3-1 on the road trip Fletcher said he'd use to evaluate Hakstol, the rest of the coaching staff and the team in general.

Hakstol is the fifth coach fired this season. Hired by Hextall from the University of North Dakota in 2015, Hakstol took the Flyers to the playoffs twice in his three full seasons, but they lost in six games in the first round each time. The Flyers under Hakstol in 2016-17 became the first team in NHL history to miss the playoffs after having a 10-game winning streak, and last season were also the first to make the playoffs after a 10-game losing streak.

"He's a great guy," winger Jakub Voracek said. "We made the playoffs two of three years. We had ups and downs. He was a new coach, first time coaching in the NHL. You learn obviously over the span of those years. It's always tough when somebody's let go."

It was not immediately clear when the Flyers would hire a full-time coach, though Fletcher indicated he expects Gordon to work through the remainder of the season. Three-time Stanley Cup-winning coach Joel Quenneville was fired by Chicago last month, but Fletcher said he has not gotten permission from the Blackhawks to speak with Quenneville and hasn't talked to him in roughly two years.

Gordon is an NHL head coach for the second time after parts of three seasons leading the New York Islanders. He has spent the past three-plus seasons as coach of the American Hockey League's Lehigh Valley Phantoms, Philadelphia's top affiliate.

"He's got some creative ways of thinking (about) the game," said Andrew MacDonald, who played for Gordon with the Islanders. "We had a really young team in New York when I was there — transitioning from an older team to a younger team. It was kind of a tough situation for him. He was trying to bring in new ideas with speed and some of his philosophies. I really liked Scott as a coach. He's a good man, he's got good systems and I think he'll do a good job for us."

Hextall's inability to turn things around was among the reasons he was unexpectedly dismissed Nov. 26. Hakstol at the time got a reprieve while team President Paul Holmgren searched for a GM.

Hakstol's final game was a 5-1 loss at Vancouver on Saturday night. The 50-year-old coach from Warburg, Alberta, said he felt his players battled all the way through the blowout loss. He added it's "not good enough, obviously, because the end result is what matters."

"It's been four years and you build relationships," captain Claude Giroux said Monday. "I think for one guy to kind of pay the price for what's going on, it's not fair, but it's the business side of it."

Philadelphia hasn't won the Stanley Cup since 1975 and was ready to try to contend after several years of retooling. Hextall signed winger James van Riemsdyk to a $35 million, five-year contract in the but never addressed the goaltending position beyond injury-prone Michal Neuvirth and Brian Elliott.

Philadelphia went 134-101-42 under Hakstol, who coached the third-most games in franchise history behind Fred Shero and Mike Keenan — and the most for the Flyers without winning a playoff series.

"There's been a lot of pressure on him certainly even before I was here and he handled himself with dignity, with class, a straight-up guy," Fletcher said. "I just have a tremendous amount of respect for him."

NOTES: The Flyers recalled top goaltending prospect Carter Hart from the AHL, and he could make his NHL debut Tuesday against Detroit with Gordon behind the bench. ... Fletcher said goaltender Brian Elliott would be out at least through Jan. 1 with a lower-body injury.