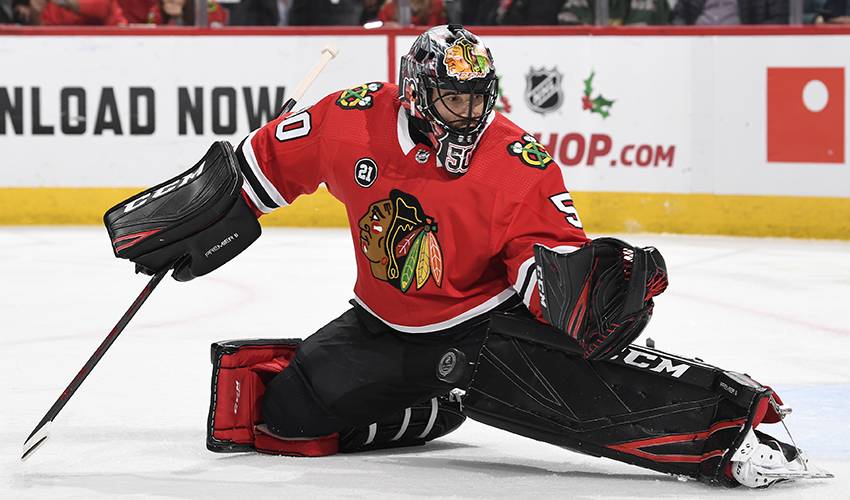 Crawford left Sunday's 7-3 loss to the San Jose Sharks with 1:30 left in the first period after the back of his head struck the right post during a goalmouth pileup.

Coach Jeremy Colliton announced Crawford's injury following Sunday's loss, but had no details on the severity or how long the goalie might be out.

"He has a concussion," Colliton said. "So he'll be under the protocol and we'll go from there.

On Sunday, Crawford allowed two goals on eight shots and left with Chicago leading 3-2. He was replaced by Cam Ward, who allowed five goals on 35 shots as San Jose roared back for its fourth straight win and dealt Chicago its 10th loss in 11 games.

Crawford had just made a pad save on Logan Couture, who had broken in off the wing.

As Couture cut across the crease, Chicago's Dylan Strome tried to cut him off and slashed him.

At the same instant, San Jose's Evander Kane plowed into Strome from behind and Strome tumbled into Crawford, forcing the goalie into the goalpost. Kane was assessed a minor penalty for goaltender interference.

"I was trying to cut off Couture and just got rubbed out a little bit," Strome said. "I don't think Evander Kane is trying to hit me into Crawford and hurt him.

"A lot of guys in a little space and stuff happens. We're going fast and were coming back hard."

"A great goaltender, a great guy, and important part of the team," Colliton said. "We hope for a quick recovery."