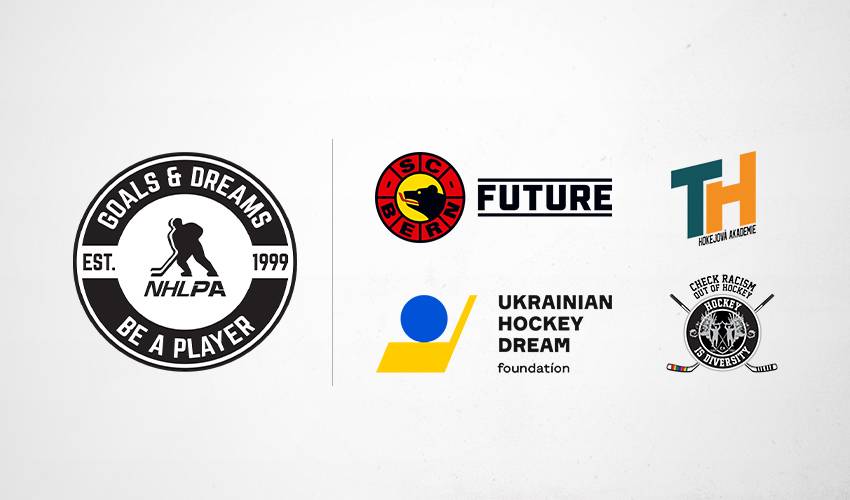 On Monday, Nashville Predators defenceman Roman Josi and NHLPA Goals & Dreams announced a donation of 25 sets of equipment to SC Bern Future, in support of local girls’ programs in Josi’s hometown of Bern. The girls in attendance were welcomed onto the ice before the game, participated in a scrimmage during the first intermission and enjoyed tickets to the exhibition game.

“This experience of playing with my NHL teammates in my hometown, surrounded by family, friends, and neighbours, is one I will never forget,” said Roman Josi, NHLPA member and Predators defenceman. “Leaving behind a lasting impression on girls’ hockey in Bern, through NHLPA Goals & Dreams, has topped off a very special trip.”

Yesterday in Berlin, NHLPA Goals & Dreams recognized a new donation of 25 sets of equipment to Hockey is Diversity e.V., a non-profit international network of ice hockey players in Berlin, which is committed to diversity as the basis for treating each other with respect. A group of children from the program were introduced to the game by players from the U9 Eisbaren HC at the Global Fan Tour in the morning, while the U9 Eisbaren team represented both organizations in the pregame ceremonies, as well as a scrimmage on the ice during the first intermission.

“We are very grateful to the NHLPA Goals & Dreams fund and the NHL players for this amazing support. Thanks to this donation, young people who otherwise would never have had access to the game are benefiting. Creating an inclusive welcoming culture in hockey and changing the face of hockey takes a collective effort. We are proud to have strong allies on our side with the NHLPA members,” said Dr. Martin Hyun, Hockey is Diversity CEO.

On Friday and Saturday in Prague, NHLPA Goals & Dreams will recognize two donations of 25 sets of equipment. The first donation is to the Ukrainian Hockey Dream, a foundation created by the Ice Hockey Federation of Ukraine, supporting Ukrainian youth affected by the war by providing safe accommodations, hockey equipment and financial assistance to the families.

“Hockey in Ukraine is a favorite sport and the way of life of more than 4,000 children, who are dreaming to save their 2022/2023 training season. Due to the work of the Ice Hockey Federation of Ukraine, the ice arenas in the center, west parts of Ukraine have restarted their work. Kids are coming back onto the ice. A lot of relocated children from the east part of Ukraine are looking for any opportunities to stay in hockey as well as others want to start to play. However, the current opportunities are limited due to the war. The donation of hockey equipment to the Ukrainian Dream Foundation will help the children who remained in Ukraine continue to play hockey or start to do that. It’s a huge contribution to save their dreams and to help others to find it,” said Aleksandra Slatvytska, Ice Hockey Federation of Ukraine Executive Director.

The second NHLPA Goals & Dreams donation recognized in Prague is to Hokejova Akademie Tomase Hertla, a youth hockey camp hosted by San Jose Sharks forward and Prague native, Tomas Hertl. Each group will be welcomed onto the ice during the pregame ceremonies, while they will also enjoy an opportunity to participate in a scrimmage during the first intermission and attend the game.

“This is an exciting week returning home to play in front of family, friends and the great hockey fans in Czechia,” said Tomas Hertl, NHLPA member and Sharks forward. “As a part of the events, we are proud to provide new hockey equipment through NHLPA Goals & Dreams to help more youth play hockey.”