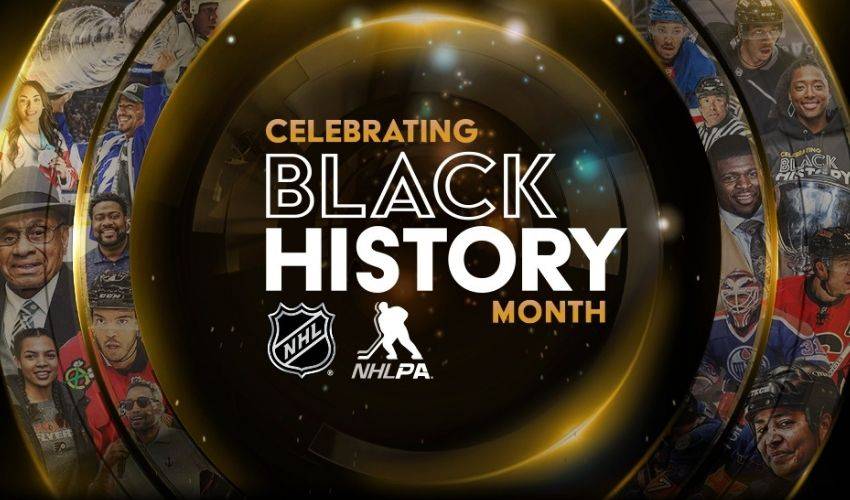 NEW YORK/TORONTO (Feb. 1, 2022) – The National Hockey League (NHL) and National Hockey League Players’ Association (NHLPA) today announced plans to celebrate the contributions and stories of Black trailblazers in hockey with 28 days of storytelling across their social and digital platforms. The daily stories will highlight numerous men and women and their career milestones, achievements, awards and accolades, as well as hockey organizations committed to making the game a more diverse and inclusive space.

“February is an important month to reflect on the achievements of Black men and women, while also emphasizing the need to amplify ongoing action across the League and Clubs to ensure the Black community is represented and welcomed in the sport of hockey,” said Kim Davis, NHL Senior Executive Vice President of Social Impact, Growth Initiatives and Legislative Affairs. “Our commitment to this work is embedded in the phrase ‘Hockey is for Everyone.’ The NHL has long used this phrase not as a statement of today’s reality, but as a vision for the future – a vision that is increasingly coming to life on the ice, in the stands, and in the boardroom, where Black voices and perspectives continue to move the game forward. Black History Month is a meaningful opportunity for everyone within hockey’s ecosystem to reinforce the year-round movement for positive change.”

On February 10, the NHL will release the first episode of ‘NHL Bound,’ an original content series that follows Duante’ Abercrombie and Nathaniel Brooks, two Black hockey coaches chasing their dream to work in the NHL. The weekly series chronicles their participation in the Arizona Coyotes’ first-ever coaching internship program, dedicated to creating a deeper pool of diverse talent. Viewers will get a behind-the-scenes look at the Coyotes’ management and coaching staff operations as well as Abercrombie’s and Brooks’ personal dedication, sacrifices, and passion to shatter stereotypes and earn their place behind an NHL bench.

“We were extremely proud to introduce this program that provided Duante’ and Nathaniel with an incredible opportunity to gain invaluable experience and help them with their career advancement in our great sport,” said Coyotes President & CEO Xavier A. Gutierrez. “The Arizona Coyotes are committed to advancing diversity, equality, and inclusion in our game and will continue to do our part in the community and within the game of hockey to affect positive change.”

The four episodes will be released every Thursday at YouTube.com/NHL, available to viewers worldwide. A compilation show will be available at the end of February via streaming to ESPN+ subscribers, as well as broadcast on Sportsnet, TVA Sports and NHL Network. Produced in association with NHL Original Productions, the series is directed by Kwame Damon Mason, executive produced by NHL Chief Content Officer Steve Mayer and produced by Robert Sevilla.

“‘NHL Bound’ captures the essence of our approach to storytelling,” said Mayer. “As we chronicle the journeys of Duante’ and Nathaniel through the Coyotes’ coaching internship program, I hope this series shows there are paths to the NHL for everyone, not only in coaching but at all levels.”

Returning for the third season is the NHL® Presents the American Legacy Black Hockey History Tour, a uniquely-curated, 525-square-foot mobile museum honoring Black founders, trailblazers, history makers, and Stanley Cup champions; and celebrating the next generation of young stars, NHL Officials, broadcasters, and women in the game. This season, the tour will visit 28 NHL cities, the most ever since it was launched. For the full tour schedule, visit NHL.com/BlackHockeyHistory.

“Black History Month provides an opportunity for us to show our appreciation for the contributions that Black men and women have made to hockey – from Willie O’Ree playing his first game in 1958, to Hall of Fame member Angela James, to the 25 current Players who have played in an NHL game this season,” said Jonathan Weatherdon, NHLPA Senior Director of Communications. “The Players will continue working with the hockey community toward ensuring we have a welcoming and accessible game that can be enjoyed by everyone at all levels.”

Current player jerseys and product, Willie O’Ree apparel, and a one-of-a-kind ‘Black History Month’ sweater will be featured this month on Shop.NHL.com. The collection will include nearly 100 items available for purchase. The online shop will also feature products from Fathead, a Black-owned business.

Black History Month programming is part of Hockey Is For Everyone, a year-round NHL and NHLPA initiative celebrating diversity and inclusion, as well as the numerous hockey fans that represent every race, color, religion, national origin, gender identity, age, sexual orientation, socio-economic status, and those with disabilities. Since 1995, when ‘NHL Diversity’ was founded, the League has celebrated Black achievement in hockey with events, observances, youth hockey tournaments, and original programming.