January 14, 2022
By:
Chris Lomon
Away From the Rink
John GibsonAnaheim Ducks 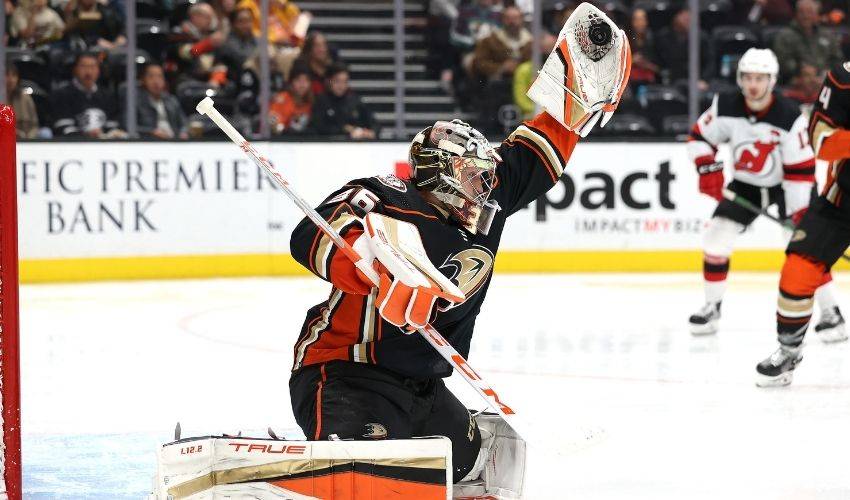 In this instance, netminder John Gibson is proud to have his name associated with the word goals.

The charitable program known as Gibson’s Goals was the result of a team effort put into play by the Anaheim Ducks’ starting goaltender and his wife, Alexa.

Supporting adaptive and inclusive hockey programs, the initiative’s aim is to advocate for individuals of all abilities while facilitating the opportunity for them to enjoy participating in the sport of hockey.

“It was important to start this because it gives people of all ages the opportunity to do something they love no matter the circumstances,” said Gibson, who has 349 NHL GP since entering the league in 2014. “From young kids to wounded warriors, they all come together to play sled hockey. We want everyone to be able to have fun, compete, and build lasting relationships.”

As part of the initiative, the Gibsons, over the course of three Ducks home games, played host to participants from The Top Flight program, blind hockey and sled hockey programs.

The Gibsons have come to know several of the players who are part of the San Diego Ducks Sled Hockey program, sponsored by the Anaheim Ducks, which offers youth and adult teams for all skill levels.

In 2018-19, the Gibsons hosted two suite nights and an on-ice clinic for the sled team.

Two years ago, after Ducks training camp had concluded for the day, John and Alexa stayed at Great Park Ice, a public skating facility and the Ducks’ practice rink in Irvine, California, to spend time with players from various hockey programs, including the San Diego Ducks. Gibson strapped on his skates and joined them on the ice.

“The Ducks sled hockey team is one of the closest teams I’ve seen,” said Gibson. “They are truly more of a family than just a team. They have an incredible time together and love playing hockey. Each and every one of them is an inspiration to kids and adults everywhere.”

Recently named to his third NHL All-Star Game, the 28-year-old Pittsburgh native and father of two appreciates any opportunity to make a connection with fans – including through hospital visits, community events, autograph signings.

Gibson has been a Ducks' player ambassador for Hockey Is For Everyone – a joint initiative led by the NHL and NHLPA to reinforce that the official policy of the sport is one of inclusion on the ice, in locker rooms, boardrooms and stands. Giving back to the community remains an integral part of his life.

Through Gibson’s Goals, he has been able to heighten those experiences.

“We want to keep supporting them in every way we can,” said the backstopper, who was the Ducks’ 39th pick in the 2011 NHL Draft, and shared the 2015-16 William M. Jennings trophy, alongside then teammate Frederik Andersen, for the fewest goals allowed. “We want to make sure they have all of the resources they need to make it to their tournaments and continue their success as a team.”

The star goalie also has his sights set on helping the Ducks enjoy a successful 2021-22 campaign.

After not qualifying for the playoffs the past three seasons, the Pacific Division club is looking find its way back into the postseason mix.

If they need a calming influence as the games take on more meaning, they can count on their veteran presence between the pipes to help lead the way.

“I’m just a very laid-back person,” said Gibson. “I’ve always been that way since I was young. I think it’s just the way I am – just be calm and laid back. That’s how I approach everything.”

Although that calming presence may be set aside when he’s cheering on the Ducks sled team. Gibson would be proud to boast about the Ducks' recent showing at the USA Hockey Sled Classic, and will no doubt continue to share their successes both on and off the ice.