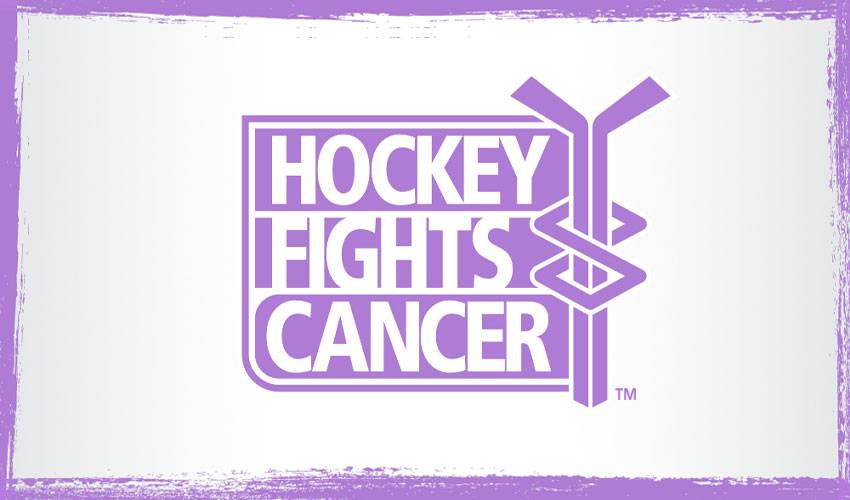 New Fan Sweepstakes at HockeyFightsCancer.com/Vegas to Fundraise for the Cause and a Chance to Win* a Trip to the 2022 NHL® All-Star Weekend in Las Vegas

This season, NHL Alumnus Dominic Moore has been named the 2021 ambassador. Moore played in the NHL for 13 seasons, amassing 118-193—311 in 998 career games, including the regular season and playoffs. In 2013, he founded the Katie Moore Foundation in honor of his late wife who was diagnosed with Fibrolamellar Hepatocellular Carcinoma, a rare form of liver cancer. Moore also co-founded Smashfest, a charitable ping-pong event that brings together NHL Players and Alumni, celebrities, and fans to raise awareness and funds for concussion and rare cancer research.

“Unfortunately, too many of us have a cancer story. No matter what the specific disease is, we are all impacted in the same way: our lives are turned upside down,” said Moore. “This month, I want to help share stories of grief, hope, and triumph, because there’s an opportunity to find comfort and strength in our fight against cancer.”

Esteemed national organizations American Cancer Society and Canadian Cancer Society will return as partners for the fifth season. Donations raised will continue to support hundreds of cancer patients and their families every day with accommodations, meals, transportation, activities, and emotional support. To date, donations have provided more than 506,000 nights in lodges, transportation equaling more than 370,000 rides, and funding to support a 24/7 helpline for patients and caregivers.

“Every year, Hockey Fights Cancer brings the hockey community together with the American Cancer Society to support cancer patients and their families, funding such critical services as free lodging for patients and caregivers and transportation to and from treatment,” said Dr. Karen Knudsen, American Cancer Society Chief Executive Officer. “Since its beginning in 1998, the Hockey Fights Cancer program has raised millions of dollars to help patients through their cancer experience. We are grateful to the National Hockey League and National Hockey League Players’ Association for their continued commitment to the fight against cancer.”

“We are so grateful for our ongoing partnership with the NHL and NHLPA,” said Jane Parsons, Executive Vice-President, Revenue Development at the Canadian Cancer Society. “Through events like Hockey Fights Cancer we raise important funds for cancer prevention, research and support programs that can change the future of cancer.”

New this season, fans can visit HockeyFightsCancer.com/Vegas to contribute to the cause and enter for a chance to win* a trip to the 2022 NHL® All-Star Weekend in Las Vegas. All contributions will go to the National Hockey League Foundation and NHL Foundation in support of Hockey Fights Cancer.

Returning this season, with support from the American Cancer Society and Canadian Cancer Society, is the ‘HFC Assist’ program, a unique campaign that allows youth hockey teams across the U.S. and Canada to host a local Hockey Fights Cancer awareness night at their community rink. To date, hundreds of youth hockey teams have hosted their own in-game nights. With many leagues and teams returning to the ice, the program will begin again, with proceeds continuing to support the American and Canadian Cancer societies.

Continuing the tradition, all 32 NHL Clubs will host a Hockey Fights Cancer in-game awareness night with original storytelling, special ceremonies, and fundraising efforts for local charities. Youth hockey teams that want to emulate NHL Clubs and Players are encouraged to sign up for ‘HFC Assist’ at HockeyFightsCancer.com to receive a kit that includes lavender tape, helmet decals, and information on how to host a fundraiser.