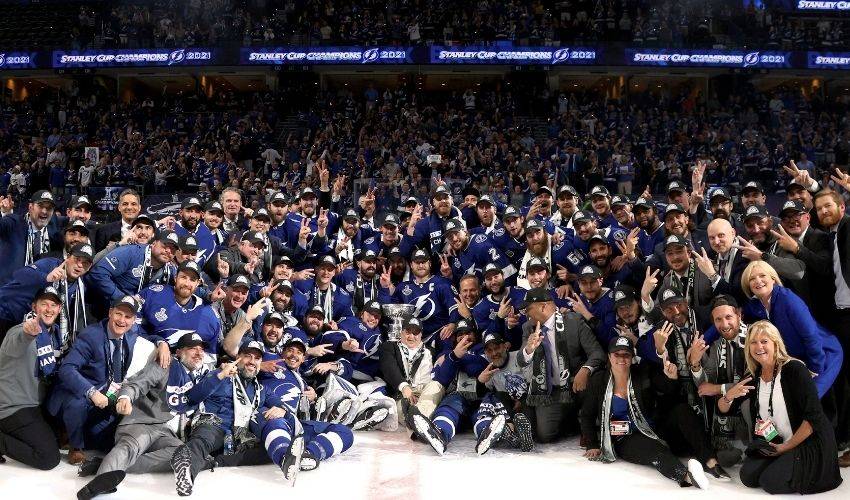 The Tampa Bay Lightning made it consecutive Stanley Cup championships after defeating the Montreal Canadiens 1-0 in Game 5 of the Stanley Cup Final Wednesday night at Amalie Arena in Tampa Bay.

Montreal and Tampa Bay played a scoreless first period with the Lightning holding a 13-4 shot advantage heading into intermission. Blake Coleman led Tampa Bay with three shots on goal in the first frame, but it was Ross Colton who opened the scoring in the second period, netting his fourth goal of the Stanley Cup Playoffs at 13:27. David Savard and Ryan McDonagh assisted on the goal.

Goaltender Andrei Vasilevskiy and the Lightning turned away the Canadiens’ third period push in an effort to tie the game. Tampa Bay, who ultimately outshot Montreal 30-22, celebrated a Stanley Cup victory for a second consecutive season.

Vasilevskiy, who has spent his entire career with Tampa Bay and won the Vezina Trophy in 2019, was named the Conn Smythe Trophy winner after posting five shutouts among several standout performances throughout the playoffs.

The Russian netminder, who was chosen as the league’s top goalie (54.12%) in the recent NHLPA Player Poll, is the first goalie to record back-to-back Stanley Cup clinching shutouts since Bernie Parent in 1974-1975 for the Philadelphia Flyers.

Tampa Bay, which celebrated its third title in franchise history (2004, 2020), got out of the series gates quickly courtesy of a dominating 5-1 win in Game 1. Nikita Kucherov, the 2018-19 Ted Lindsay Award recipient, paced the Lightning with a pair of goals and an assist. Brayden Point chipped in with three assists and Vasilevskiy turned aside 18 of the 19 shots he faced.

Montreal bombarded Vasilevskiy throughout Game 2, firing 43 shots at the 26-year-old backstopper. After a scoreless first frame, Lightning forward Anthony Cirelli opened the scoring in the second period, netting his fifth goal of the postseason. Nick Suzuki responded for the Canadiens to knot the game at 1-1, but a diving redirected goal by Blake Coleman restored the Lightning advantage with only two seconds left on the clock. Vasilevskiy shut the door in the final frame with Ondrej Palat scoring with less than five minutes left for Tampa Bay to hold on for a 3-1 win.

The Canadiens looked to get back into the series as the scene shifted to Montreal for Game 3. Jan Rutta and Victor Hedman silenced the home crowd with two early goals, before Phillip Danault brought the home crowd to life with a goal at the 11:16 mark of the first period. The Lightning scored early again in the second period as Kucherov lit the lamp at 1:40. Tyler Johnson then boosted the ‘Bolts lead to three at 3:33 of the middle frame, before Suzuki trimmed the Lightning lead to 4-2 with less than two minutes to play in the second. Johnson scored his second goal of the game at 15:19 of the third before Corey Perry responded 39 seconds later for Montreal. Coleman closed out the scoring with an empty-net tally at 16:48 as Tampa Bay notched a 6-3 win.

Josh Anderson opened the scoring in Game 4, an even-strength tally assisted by Cole Caufield and Nick Suzuki at 15:39 of the first period. Barclay Goodrow put the Lightning on even terms at 17:20 of the second period, as the teams headed to intermission tied at 1-1. Tampa Bay held a 20-14 advantage on the shot clock heading into the third period. Alexander Romanov put Montreal up 2-1 at 8:48 in the third, but Pat Maroon scored exactly five minutes later to send the game to overtime. Josh Anderson pounced on a rebound at 3:57 of the first extra frame to give the Canadiens a 3-2 win, sending the series back to Florida.

The Lightning became the first team since the Pittsburgh Penguins (2016, 2017) to win back-to-back titles.

Congratulations to the 2021 Stanley Cup Champion Tampa Bay Lightning, from the staff and members of the National Hockey League Players’ Association.