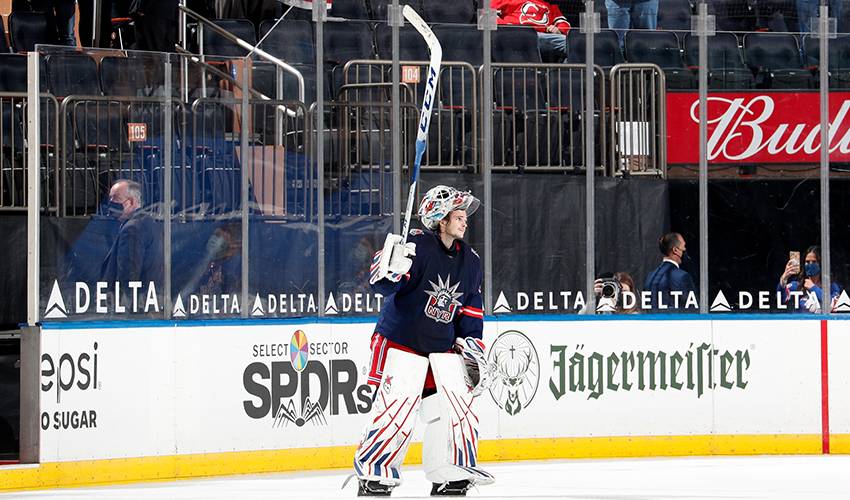 Igor Shesterkin continues to be a cornerstone player for the New York Rangers as the rookie earned an NHL career milestone while posting back-to-back shutouts to lead  league with three wins.

Shesterkin went 3-0-0 for the week and posted a 0.99 goals-against average and a .962 save percentage. After returning from a groin injury March 25, Shesterkin has been one of the top goalies in the league, posting a 7-2-2 record along with a 2.24 GAA and a .929 SV%. Over that span, he leads goalies with 326 saves and two shutouts while sitting tied for second in wins.

“Igor’s been great,” Mika Zibanejad said about his teammate. “He was unbelievable last year as well. We know what kind of goalie he is and I feel like he gives us a chance to win games every night. He comes up with saves at the right times and that’s huge for us.”

Shesterkin made 27 saves for his first shutout of his NHL career as the Rangers opened a four-game series against the New Jersey Devils with a 3-0 win at Prudential Center Tuesday night.

Just 22 seconds into the game, Shesterkin had to be sharp with Devils forward Jesper Bratt in alone on a breakaway. It was one of two scoring attempts on a breakaway that he thwarted in the game, including later denying Miles Wood.

Shesterkin earned the game’s first star for his performance but was quick to credit his teammates for their part in the win.

"It obviously means a lot,'' Shesterkin said through a translator after the game. ''And I want to thank all the players who played in front of me and blocked shots, all game, especially at the end when it was so meaningful to me to get this win and the shutout, and they did it for me and I'm thankful."

Shesterkin earned his second-straight shutout as the Rangers picked up a 4-0 victory over the Devils at Madison Square Garden Thursday night.

Starting for the 10th time in the last 12 games, Shesterkin’s workload was lighter as he made 16 saves for the victory while his Rangers teammates Rangers ensured their support by scoring three goals in the first period.

Shesterkin did have to make some tough saves, however, including a pair from Devils forward Jack Hughes who found a way to break through the Rangers defence for a chance in tight.

It was the first time a Rangers goalie earned his first two NHL career shutouts in back-to-back appearances. He also became just the second Rangers rookie to post back-to-back shutouts after Lorne Chabot first did so back in the 1926-27 season.

"Indeed, there was not much work in this one,’’ Shesterkin said through a translator. "The guys did a great job. They blocked a lot of shots [and] I was facing some easier shots.

Shesterkin made 30 saves in the Rangers’ 6-3 victory over the Devils at Madison Square Garden Saturday night to earn his third-straight win.

The Rangers goalie did his best to keep his shutout streak intact, but the Devils finally broke through in the second period on a goal by Devils forward Michael McLeod ending the streak at 152:37. Shesterkin also set a new Rangers record for the longest shutout streak against a single opponent as he held the Devils goalless for 199:33.

The next day the Rangers completed their back-to-back on home ice by posting a 5-3 win, in which Shesterkin made a brief appearance in 2:19 of relief in the first period to replace teammate Alexandar Georgiev, who returned in the second period to complete the game.