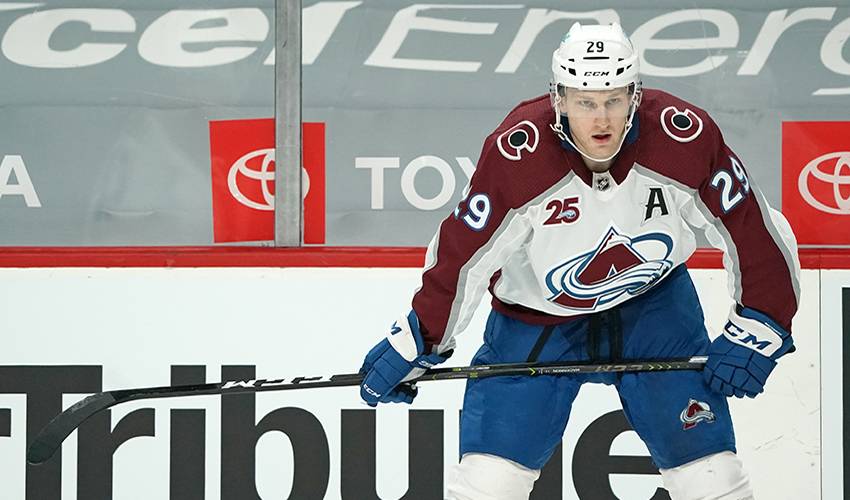 Nathan MacKinnon has been on a scoring tear with the NHL’s longest active point streak while helping the Colorado Avalanche take over the league lead in the Presidents’ Trophy race.

With 50 points to his name as he carries the league's longest active point streak, Nathan MacKinnon earned NHLPA.com Player of the Week:

The 25-year-old has six goals and nine assists during a nine-game point streak, which is the longest for an Avalanche player this season. MacKinnon also reached 50 points on the season and did it in 37 or fewer games for the third time in his career.

MacKinnon has also been moving up the Avalanche’s all-time goal-scoring list this season after recently passing Peter Forsberg for the fourth-most in team history.

MacKinnon scored a goal and added an assist to help lead the Avalanche to a 5-4 victory over the Minnesota Wild at Xcel Energy Center Monday night.

With Colorado trailing 1-0 after the first period, MacKinnon wasted no time getting his team on the board while showing off his elite speed. Avs defenceman Samuel Girard sent MacKinnon in alone on a breakaway as he blew past the Wild defence for his 14th goal of the season.

The goal from MacKinnon kicked off a four-goal second period for the Avalanche with the forward later adding his second point of the game with an assist on Gabriel Landeskog’s third-period goal.

MacKinnon extended his point streak to six games in the win and Colorado improved to 13-0-2 during their league-best 15-game point streak.

MacKinnon extended his point streak to seven games by notching a goal and an assist in the Avalanche’s 8-3 loss to the Wild at Xcel Energy Center Wednesday night.

Similar to his previous multi-point outing, MacKinnon got off to a quick start in the second period by scoring just 26 seconds into a powerplay as he made a nice move to get free into the slot before beating Wild netminder Cam Talbot.

MacKinnon added his second point of the night later in the period by setting up teammate Mikko Rantanen on the powerplay for his 32nd assist on the season.

He had been held off the scoresheet until late in the third when he was able to notch an assist on Rantanen’s empty-net goal.

MacKinnon had a goal and an assist to extend his point streak to nine games at Honda Center Sunday night in a win over the Ducks.

With Colorado leading in the third period, MacKinnon added some insurance as he deflected a pass from Cale Makar for his 16th goal of the season.

While it is not surprising to see MacKinnon go on a scoring run like this, Avalanche head coach Jared Bednar has been impressed with his top player’s determination to make plays.

''I just think he's starting to dial up his 200-foot game and he's making plays,'' Bednar said. ''Tonight, he went to the net hard, he gets rewarded at the end of the game.''

MacKinnon will look to continue his strong play, and further his point streak, as the Avalanche host the Arizona Coyotes April 12 before hitting the road to take on the St. Louis Blues April 14. The Avs will finish the week with two games against the Los Angeles Kings April 16 and 18.