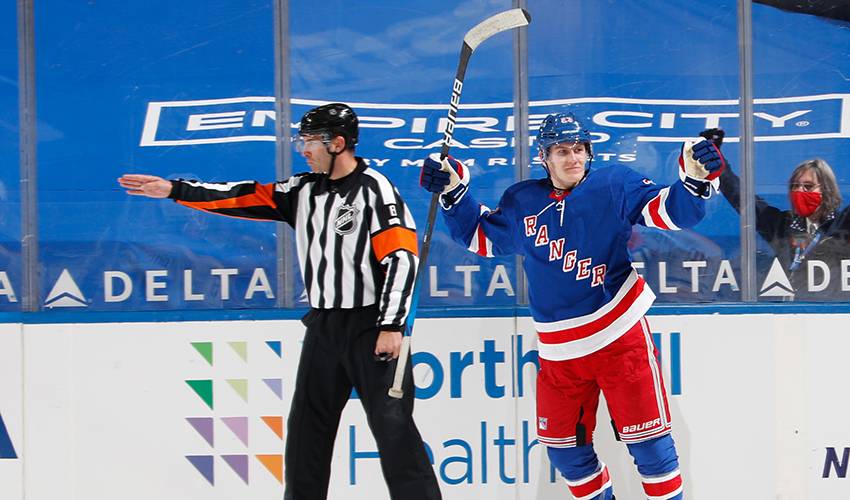 Adam Fox had plenty to celebrate as he continued to enjoy a breakout season with the New York Rangers. This past week, the defenceman led the league in points (11) and assists (10) while building his point streak to seven games.

The 23-year-old, who played in the 100th regular season game of his NHL career and recorded a career-best five-point night, believes he has come a long way after making his NHL debut last season.

“Having a year of experience under your belt helps you understand a lot of things, the pace and everything,” Fox said about reaching 100 games. “I think I’m a guy that likes to slow things down and read situations. Coming into this year I wanted to make more of an impact, and I definitely think I’ve done that.”

While his offensive game has earned a lot of praise this season, Hall of Fame defenceman Brian Leetch believes other areas of Fox’s game don’t get enough attention, especially his hockey IQ.

“When I watch him play, a lot of the time it’s as a fan. I enjoy the way he plays and the plays he makes,” Leetch said about Fox.

“Whether it’s out of the zone, a little three-foot pass to the middle, he takes one look over his shoulder and, boom, we’re right out of the zone because of the low support. Or if it’s on the power play, being able to move it to the right guy at the right time. It’s a lot of simple plays that are right at the right time and right on the stick and in stride.”

Playing in his 100th career game, Fox scored a goal and added two assists to help the Rangers pick up a 5-3 victory over the Buffalo Sabres at Madison Square Garden Monday night.

After helping the Rangers take a 2-1 with an assist on Chris Kreider’s power-play goal, Fox got himself on the board late in the second period by driving to the net to bury the loose puck past Sabres netminder Dustin Tokarski.

With the game tied in the third period, Fox once again helped the Rangers regain the lead as he picked up his second assist of the game on another goal by Kreider. The defenceman led all Rangers in ice time and was named the game’s first star, which came as no surprise to his teammates.

“Where do I start? He’s unbelievable,” teammate Mika Zibanejad said about Fox. “The way he plays with the puck, I think everyone can see that he’s so calm, he makes the right decision all the time and he’s been really good defensively this year.

“I can’t believe this was his 100th game tonight. The way he plays, he means so much to us, offensively, defensively, and obviously on the powerplay as well.”

Fox extended his point streak to five games by notching five assists in the Rangers’ 8-3 victory over the Philadelphia Flyers at Wells Fargo Center Thursday night.

It was a memorable night for Fox as he matched a Rangers franchise record for assists in a regular-season game, joining Brian Leetch as the second defenceman to accomplish the feat.

Fox played a big role in the team’s offensive outburst against Philadelphia by setting up his teammates from the backend, including this goal by Mika Zibanejad.

The one timer is BACK. pic.twitter.com/BAz1WwMnaZ

Fox’s output for the night was only outdone by Zibanejad who registered six points, including a hat trick.

“We’re not cheating the game,” Fox said about his team’s play the past few games. “We’re getting chances off the rush and capitalizing on that. It starts on the back end, and we get chances off that.”

Fox kept his point streak alive in the Rangers’ 2-1 loss to the Flyers on the road Saturday night, while he also led his team in ice time for the game.

Fox earned his 24th assist of the season as Zibanejad finished off a great passing play on the powerplay to give the Rangers a 1-0 lead.

The six-game assist and point streak both set career-highs for Fox at the time.

With the Rangers trailing 4-0 in the third period, Fox forced a turnover in the Capitals’ end, getting the puck to teammate Colin Blackwell who beat Caps netminder, Ilya Samsonov.

As Washington added to their lead, New York attempted to mount a comeback with Blackwell and Alexis Lafrenière pulling the Rangers within two goals. With four minutes left in the final period, Fox tallied another assist on the powerplay for the Rangers to cut the Capitals lead to one.

With the assist, Fox moved into second among NHL defencemen in power-play assists and points this season.

Fox sits third in the league among defencemen with 29 points in 33 games this season. Over the month of March, the Rangers defenceman leads the league with 17 assists in 14 games and leads all defenceman in points with 19.

Fox will look to extend his point streak as the Rangers host the Capitals at Madison Square Garden March 30, before hitting the road to take on the Buffalo Sabres April 1 and 3.