March 8, 2021
By:
NHL/NHLPA Media Release
Media Releases
gender equality monthHockey is For Everyone 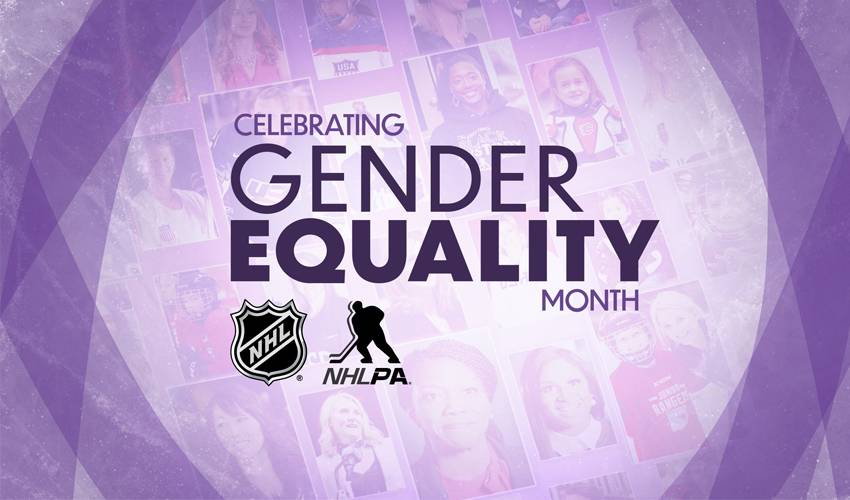 NEW YORK/TORONTO (March 8, 2021) – This month, the NHL and NHLPA are celebrating more than 200 women from across the hockey community, on and off the ice, in honor of International Women’s Day and Gender Equality Month, a Hockey Is For Everyone™ initiative. These women will be featured on NHL.com/GenderEquality and across the League’s social platforms.

Two special video features this month tell the story of women who paved a unique path to professional hockey. The first video, released today, focuses on Blake Bolden, a former professional player and currently a scout with the Los Angeles Kings. Bolden is a pioneer for women in hockey who has achieved many ‘firsts’ which includes being the first Black professional hockey player in the CWHL and NWHL. Now with the Kings scouting staff, Bolden joins elite company as one of the first female scouts at the League.

Later this month, NHL vice president of events Chie Chie Yard will share her journey from an intern to one of the most influential members of the NHL Events department. Yard, a Japanese American, played for Team Japan in the 1998 Nagano Olympics, the first year women’s ice hockey was part of the Winter Games. The Houston, Texas native can now be found behind-the-scenes at every major NHL event including the NHL Winter Classic®, NHL® All-Star Weekend, NHL Awards™, and outdoor games.

Today, the NHL’s Instagram story will be taken over by more than 10 women from all over the hockey community who contribute to the game in unique ways. These women will showcase their various roles and responsibilities from front-office executives to an on-ice Zamboni® machine driver, as well as a referee, scout, coach, and many others. These stories will also be shared on the League’s Twitter, Snapchat and TikTok accounts, reaching more than 20 million followers worldwide.

Also today, the League unveiled a list of more than 200 women who are in senior leadership roles at the NHLPA, NHL and its 32 Member Clubs, available at NHL.com/GenderEqualityLeaders. Among this remarkable group of women, more than 25% are in C-Suite positions, with many leading their team’s finance, marketing, HR, legal and business departments; at least six women are owners or part of their team’s ownership group; many women have law degrees, masters degrees, PhDs, and MBAs; and at least 14% are BIPOC (Black, Indigenous, Person of Color.) Other notable areas include player development, scouting, diversity and inclusion, building operations, and game presentation.

“Our celebration of women leaders on and off the ice is a year-round initiative, but we are excited to give it a special spotlight during Gender Equality Month,” said Kim Davis, NHL Senior Executive Vice President, Social Impact, Growth Initiatives & Legislative Affairs. “The diversity of talent leads our sport into the future every day. We know that these storytelling efforts will empower women and girls throughout the hockey ecosystem to continue bringing their full, authentic selves to every aspect of our sport.”

The NHL & NHLPA Female Hockey Advisory Committee, which was established in 2019, has continued its dedication to accelerating the growth of female hockey in North America and ensuring more women and girls have the opportunity to experience the benefits that hockey offers. Since its launch, the committee has built a resource package for every NHL Club to increase local engagement with the female hockey community. The committee also created the Female Ambassador Program, with support from the Industry Growth Fund, Hockey Canada and USA Hockey, aimed at increasing appearances of female hockey players and ambassadors at events. The committee continues to provide support to increase female participation in NHL/NHLPA Learn to Play™ and First Shift™ on-ice hockey programs.

“We are proud to highlight the impressive work of these talented women who are leaders for other aspiring women, young girls and athletes around the world. It has been amazing to watch the growth of the women’s game on the ice, from the pioneers at the first World Women’s Championship in 1990 to seeing first-hand how talented the women players were at the 1998 Olympics in Nagano and the continued evolution of play we see today. More girls are participating in hockey, both on and off the ice, and we look forward to continued growth and increased opportunities in all areas of our game,” said Mathieu Schneider, NHLPA Special Assistant to the Executive Director.

On March 23, as part of the Future Goals™ Hockey Scholar, the NHL & NHLPA will host an ‘NHL Women in STEM’ event for hundreds of middle-school boys and girls across North America to learn about the various STEM hockey career opportunities. Panelists include Lyndsey Fry (Arizona Coyotes), Kendall Coyne Schofield (Chicago Blackhawks), and Bolden (Los Angeles Kings).

The League has also released a brand-new television spot in English and French produced by NHL Studios and voiced by singer and actor Kimberly Marable, the star of two Tony Award winning musicals, Hadestown and The Lion King. The spot features women in the game who defy roles, challenge fear, and shatter barriers.

Hockey is for Everyone™ is an initiative led by the NHL and NHLPA to reinforce that hockey is a sport of inclusion on the ice, in locker rooms, boardrooms and stands. The initiative includes key celebratory months – Black History Month (February), Gender Equality Month (March), Earth Month (April), Pride Month (June), Hispanic Heritage Month (September) and Hockey Fights Cancer (November), with more on the horizon.