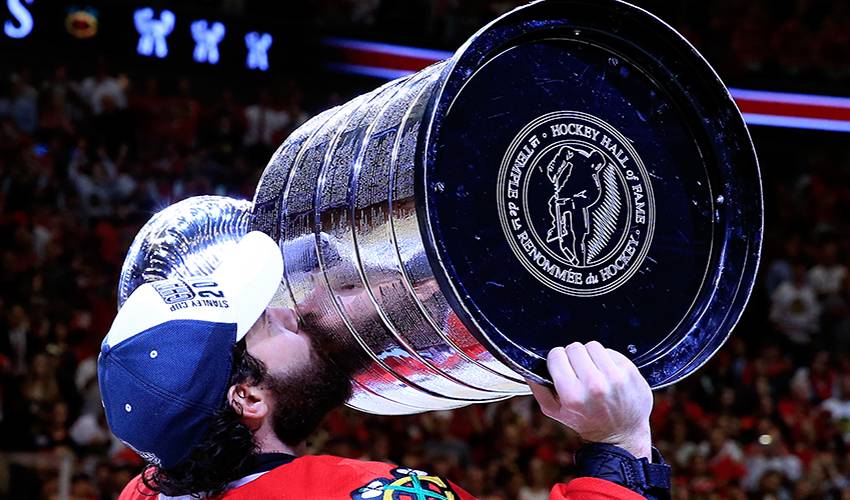 Raised in Châteauguay, Quebec, Crawford was drafted 52nd overall in the second round of the 2003 NHL Draft by the Chicago Blackhawks. He won 260 regular-season games with the Blackhawks and recorded 52 playoff wins (a franchise-high) in his career. Crawford helped lead Chicago to Stanley Cup championships in 2012-13 and 2014-15.

“Crow,” as he was affectionately referred to by many fans and teammates, played all four years of his junior career with the Moncton Wildcats of the QMJHL, where he led the league in wins (35) in 2003-04. He made his first NHL appearance Jan. 22, 2006, debuting in Chicago against Minnesota, followed by his first start less than two weeks later Feb. 2 in St. Louis. With the Norfolk Admirals of the AHL, Crawford ranked second in wins (38) in the 2006-07 season. He earned both his first NHL win and shutout March 5, 2008 versus Anaheim before his rookie season.

Crawford assumed his role as the starting netminder for the Blackhawks during his rookie season in 2010-11 when he also finished fourth in Calder Trophy voting and was named to the NHL All-Rookie Team. He earned 33 wins and 4 shutouts in 57 GP, and finished with a .917 save percentage, along with 2.30 goals-against average as a rookie – his first full NHL season. The two-time NHL All-Star (2015, 2017) earned his first William M. Jennings Trophy in 2012-13, together with teammate Ray Emery, for Chicago allowing the fewest goals thanks in part to his 1.94 goals against average. Crawford’s playoff contributions in 2012-13 played a significant part in Chicago’s Stanley Cup victory. He won 16 of his 23 starts and recorded a .932 save percentage with a 1.84 goals-against average.

The 6-foot-2, 216-pound netminder led Chicago to a tie with Montreal (Carey Price) for the fewest goals allowed in 2014-15, earning his second William M. Jennings Trophy. In the 2014-15 playoffs, Crawford helped lead the Blackhawks to another Stanley Cup victory thanks to his 13 wins and 2 shutouts. He set career-best marks in 2015-16 in wins (35) and shutouts (7), while finishing fifth in Vezina Trophy voting.

Crawford, who posted six seasons with 30-plus wins over his career, recorded a career-best 48-save shutout in a 2-0 victory March 16, 2019 against the Montreal Canadiens in his home province of Quebec. The outing also tied a club record for the most saves by a Blackhawks goalie in a shutout (originally set by Dave Dryden, Feb. 15, 1969). In franchise history, Crawford places third among Chicago goalies in regular-season games played and wins, while he tops the rankings for postseason wins and ranks second in playoff games played (96). His 26 career shutouts rank seventh overall for Chicago while his streak of eight consecutive wins (Feb. 20 – March 5, 2011) still stands tied as a franchise record for rookies. Crawford earned four postseason wins with Chicago in August, picking up his final win Aug. 16 versus Vegas, prior to signing a two-year contract with the New Jersey Devils, Oct. 9, 2020.

Internationally, Crawford earned a gold medal with Team Canada at the 2016 World Cup of Hockey.

“I have been fortunate to have had a long career playing professional hockey for a living. I wanted to continue my career, but believe I’ve given all I can to the game of hockey, and I have decided that it is time to retire. I would like to thank the New Jersey Devils organization for understanding and supporting my decision. I would like to thank the Chicago Blackhawks organization for giving me the chance to live my childhood dream. I am proud to have been part of winning two Stanley Cups in Chicago. Thank you to all of my teammates and coaches throughout the years. Also, thank you to the fans who make this great game what it is. I am happy and excited to move on to the next chapter of my life with my family.”