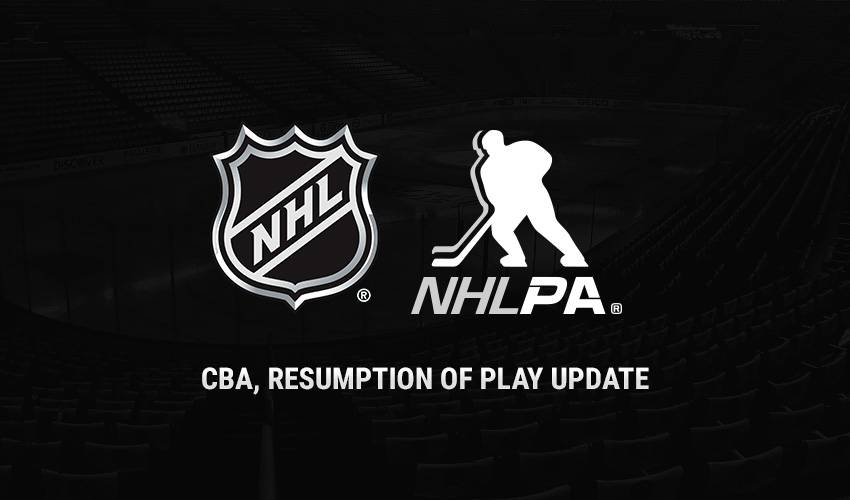 NEW YORK – TORONTO (July 10, 2020) – Following a 142-day pause, the National Hockey League will drop the puck with a five-game schedule of Stanley Cup Qualifiers on Saturday, Aug. 1, as the National Hockey League Players’ Association (NHLPA) and NHL ratified a four-year extension to the Collective Bargaining Agreement (through 2025-26) and a Return to Play Plan. The sweeping agreements pave the way for the resumption of the 2019-20 NHL season toward the crowning of a Stanley Cup champion by early October and provide an updated economic framework for the League and its Players, including addressing the challenges posed by the COVID-19 pandemic.

In keeping with the League’s commitment to the health and safety of all participants, each of the 52 Club personnel will live inside a secure “bubble” – the Phase 4 Secure Zone – and will be tested daily for COVID-19 as well as being administered daily temperature checks and symptom screenings. As well, individuals who might have direct or indirect contact with NHL teams will be tested daily. Any person inside the Secure Zone who tests positive will immediately be isolated.

“Today, the NHL and the NHLPA announced a significant agreement that addresses the uncertainty everyone is dealing with, the framework for the completion of the 2019-20 season and the foundation for the continued long-term growth of our League,” NHL Commissioner Gary Bettman said. “I thank NHLPA Executive Director Don Fehr and Special Assistant to the Executive Director Mathieu Schneider, the more than 700 NHL Players – particularly those who worked on our Return to Play Committee – and the NHL’s Board of Governors for coming together under extraordinary circumstances for the good of our game. While we have all worked very hard to try to address the risks of COVID-19, we know that health and safety are and will continue to be our priorities. We know that all of our fans are excited about our return to the ice next month and that has been our goal since we paused our season on March 12.”

“This agreement is a meaningful step forward for the players and owners, and for our game, in a difficult and uncertain time.  This would not have happened but for the enormous contributions that the players made throughout, particularly those who served on the Negotiating and Return to Play Committees, as well as those on the Executive Board,” said Don Fehr, NHLPA Executive Director.  “I also thank Gary Bettman, Bill Daly and the NHL staff for their efforts towards finding solutions to the problems we face.  Most importantly, we are pleased to be able to bring NHL hockey back to the fans.  We look forward to the NHL’s continued growth here in North America and on the world stage.”

The full text of the agreed upon CBA Memorandum of Understanding can be found here.

Games have been scheduled on a staggered basis, providing hours of continuous action. The start times for the 10 days of Stanley Cup Qualifiers in Toronto (Eastern Conference games) will be: Noon, 4 p.m. and

8 p.m. ET. In order to maximize the viewing experience for fans across North America, the start times for the three game windows in Edmonton (Western Conference games) – 2 p.m. ET, 6:30 p.m. ET and 10:30 p.m.

ET - may fluctuate by up to 30 minutes during the qualifying round.

The Stanley Cup Qualifiers featuring the 16 teams that are contesting best-of-five series to determine the eight teams advancing to the Stanley Cup Playoffs, commonly referred to as the qualifying round, will begin on Saturday, Aug. 1, with five games: three in Toronto (Carolina vs. NY Rangers, Florida vs. NY Islanders and Montreal vs. Pittsburgh) and two in Edmonton (Chicago vs. Edmonton, Calgary vs. Winnipeg).

The Stanley Cup Qualifiers featuring the top four teams from each conference to determine seeding in the Stanley Cup Playoffs, commonly referred to as the round robin, will begin on Sunday, Aug. 2, with two games, one in each hub city: Boston vs. Philadelphia (at Toronto) and Colorado vs. St. Louis (at Edmonton). 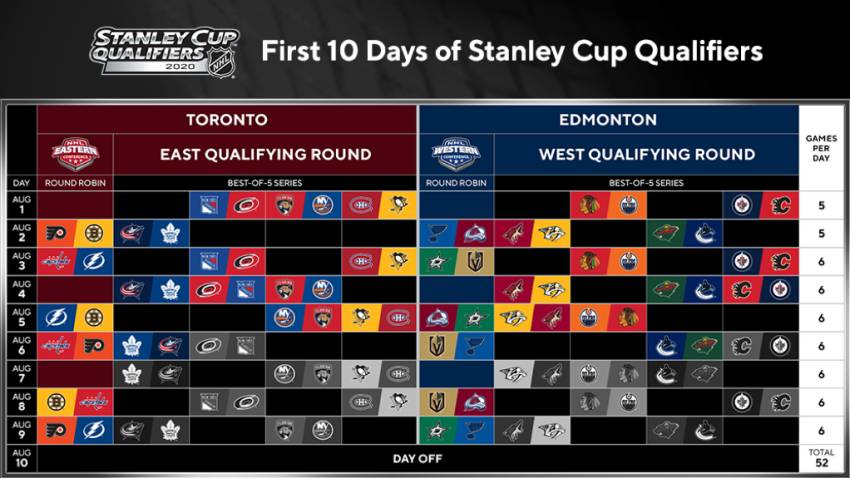 A complete broadcast schedule will be released in the coming days.

Teams participating in a best-of-five series during the Stanley Cup Qualifiers are considered to have made the postseason and participated in a postseason series.

Phase 2 of the NHL Draft Lottery will take place between the Stanley Cup Qualifiers and the start of the First Round on Aug. 10. Phase 2 will assign the first overall pick for the 2020 NHL Draft to one of the eight qualifying round teams that fail to advance. 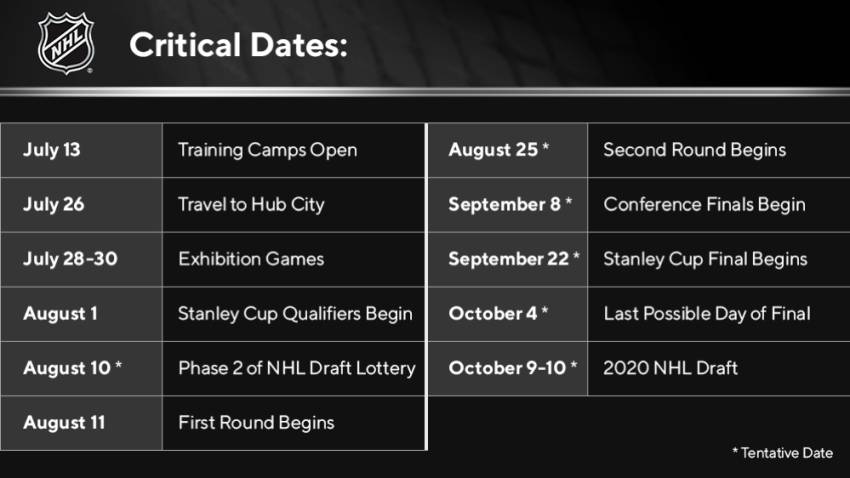