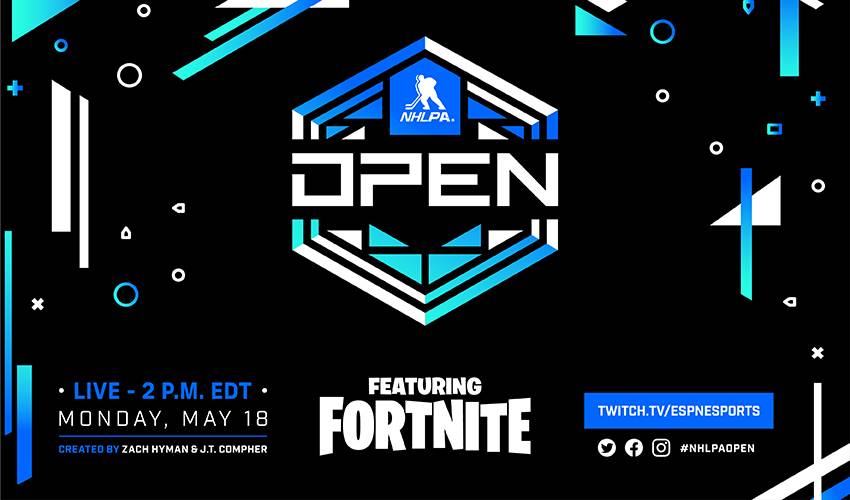 TORONTO (May 15, 2020) – The National Hockey League Players’ Association (NHLPA) is proud to announce the NHLPA Open featuring Fortnite, a live charity tournament created by J.T. Compher and Zach Hyman. Over 60 NHL players will represent their cities as they compete as Trios in Fortnite. The three-hour live Fortnite tournament will be streamed on Twitch.tv/espnesports, Monday, May 18 (2-5 p.m. ET). The NHLPA Open featuring Fortnite will be highlighted by a $200,000 USD charity prize pool, which will be directed to player-chosen charities.

The full roster of player trios will be announced prior to the event on NHLPA social media platforms, and www.nhlpa.com.

“Players across the league are passionate Fortnite players. While we cannot compete on the ice right now, it is important to the guys that we give back in a meaningful way,” said J.T. Compher, NHLPA member and forward with the Colorado Avalanche. “We are excited to showcase our competitive skills online to an ever-growing audience, and I can’t wait to watch our event unfold.”

“When J.T. approached me about creating the NHLPA Open featuring Fortnite, I was on board right away because I knew teammates and friends around the league who would be thrilled to be a part of this,” said Zach Hyman, Compher’s former collegiate teammate and current Toronto Maple Leafs forward. “Many players have participated in a number of outstanding gaming events, and J.T. and I knew players would jump at the chance to come together with such a large group of players like this to unite and compete for charity in a unique way.”

Mathieu Schneider, NHLPA Special Assistant to the Executive Director, added, “Our players have been taking part in countless initiatives during this uncertain time. The NHLPA Open featuring Fortnite, created by J.T. and Zach, is symbolic of the bonds connecting NHLPA membership away from the ice and their shared passion for giving back – something the players have demonstrated time and again. This event will connect fans to many of hockey’s greatest personalities and simultaneously benefit player-selected charities – while hopefully bringing some joy to the hockey community.”

ESPN’s stream of the NHLPA Open featuring Fortnite is part of its commitment to bringing the sports community together through its #oneteam initiative.