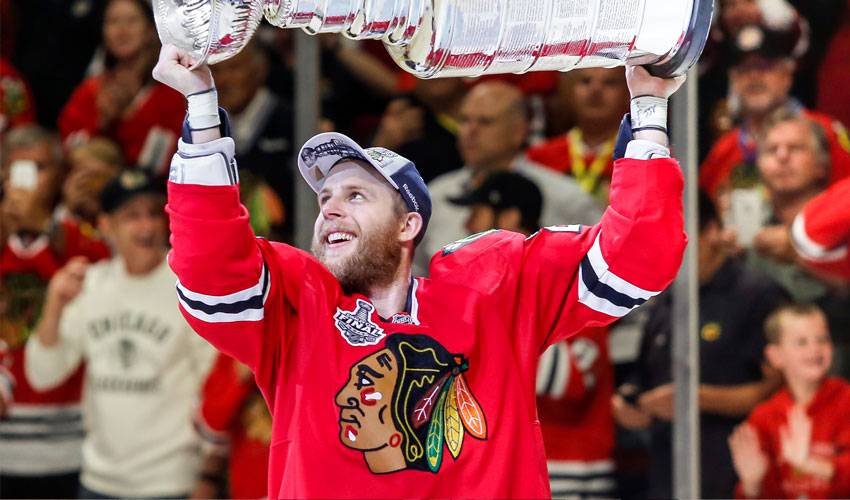 TORONTO (April 14, 2020) – Kris Versteeg has officially announced his retirement from professional hockey today following a playing career that included him appearing in 11 National Hockey League (NHL) seasons as part of a career highlighted by two Stanley Cup championships with the Chicago Blackhawks.

Born in Lethbridge, Alberta, Versteeg spent three of his four junior hockey seasons in the Western Hockey League representing his hometown Lethbridge Hurricanes. Drafted by the Boston Bruins, 134th overall, in the fifth round of the 2004 NHL Draft, he played in 56 games over two seasons with the Providence Bruins before he was traded Feb. 3, 2007 to Chicago.

The five-foot-eleven, 176-pound forward made his NHL debut Nov. 22, 2007 with the Blackhawks against the Calgary Flames and recorded his first career goal Jan. 3, 2008 as part of a two-point game versus the Phoenix Coyotes. In 2008-09, Versteeg was voted a Calder Memorial Trophy finalist and named to the NHL All-Rookie team after he scored 22 goals and 53 points, while his 31 assists (also a career-high) and four shorthanded goals led all rookies that season. He soon enjoyed professional hockey’s ultimate team success in his second full season in the league, winning his first Stanley Cup with Chicago in 2009-10. Along the Blackhawks’ playoff run, Versteeg posted six goals – two of them game-winners – as part of 14 points over 22 games.

He was traded from Chicago to the Toronto Maple Leafs June 30, 2010, where he would play 53 games before an ensuing trade Feb. 14, 2011 to the Philadelphia Flyers. The forward then helped the Flyers with six points over 11 playoff games. After being traded to the Florida Panthers July 1, 2011, Versteeg marked his first season with the club by setting career-highs in goals (23) and points (54), while matching his personal best in assists (31).

After being limited to 10 games in 2012-13 due to rib and groin injuries followed by season-ending knee surgery, Versteeg returned to the Panthers lineup for 18 games in 2013-14 before a November trade reunited him with the Blackhawks. He went on to win his second Stanley Cup in 2014-15 – his final season with the team. Versteeg’s tenure with Chicago was also made memorable by scoring at two iconic local sporting venues, with goals at Wrigley Field and at Soldier Field (2009 NHL Winter Classic and 2014 NHL Stadium Series games, respectively).

Versteeg was acquired by the Carolina Hurricanes in a September 2015 trade before he was subsequently traded in February to Los Angeles for the stretch run. In 2016-17, he recorded 37 points with the Calgary Flames – after joining the club as a free agent in October 2016 – where he enjoyed his fourth straight playoff appearance. Versteeg played 22 games in 2017-18 before undergoing hip surgery. He later returned to action for two more games with the Flames, including his final NHL game – March 18, 2018 against the Vegas Golden Knights.

His following season was split between Avangard Omsk of the Kontinental Hockey League and the Vaxjo Lakers Hockey Club of the Swedish Hockey League. He rejoined the Blackhawks organization in 2019-20 as captain for the Rockford IceHogs of the American Hockey League. After parting ways with the club in November, he played his final professional game in Slovakia as teammates with his brother, Mitch, playing for the Slovak Extraliga HK Nitra.

Versteeg earned a reputation as a versatile, energetic forward throughout his career, which included him reaching the playoffs eight times.

Kris resides in Brooklin, Ontario, with his wife Brittany and their two sons and one daughter.

“What a run it was. A kid from North Lethbridge who played on the streets every day, dreaming of playing in the NHL. I took a lot for granted in my time in the NHL. But the one thing I never took for granted were the relationships I made with my teammates and staff of the hockey clubs I played for. A bunch of people have made huge impacts on my life. There was one guy who took a kid with a different personality and a massive chip on his shoulder and helped give him hope, and that was Scott Gordon. Dale Tallon also took a chance on me and gave me multiple opportunities throughout my career. I know I wasn’t always the easiest to deal with. Without people like Scott and Dale, the road to today would not be what it was.

“Thanks to my agent Dave Kaye, and my finance advisor Chris Moynes for the last 15 years.  Thank you to every organization I was able to play for. I didn’t realize it then, but I certainly appreciate now how amazing it was to play in the NHL. I want to thank the Chicago Blackhawks’ entire organization, from top to bottom, especially including the fans. The 2010 Championship was the highlight of my career. I also want to thank Brad Treliving for letting me come home to finish my NHL career. As a person and a GM, he made a huge impact on me.

“My grandparents Morris and Joanne helped pay for skates and equipment, while feeding us when we couldn’t afford it. They are my real heroes for keeping me and my brothers in the rinks and off the streets. I’m both nervous and excited for what comes next. I have a wife who has supported me endlessly, two boys and a daughter who all have their journeys ahead of them, and I’m excited to see where those might lead. Lastly, a special thanks to my Mom and Dad. I could thank you guys for a thousand things, but it all leads back to saying thank you for the hockey stick. It may be going on the rack, but the endless amount of amazing memories it gave our entire family will be etched in our minds forever.”