February 17, 2020
By:
David Morassutti
Player of the Week
Leon Draisaitl 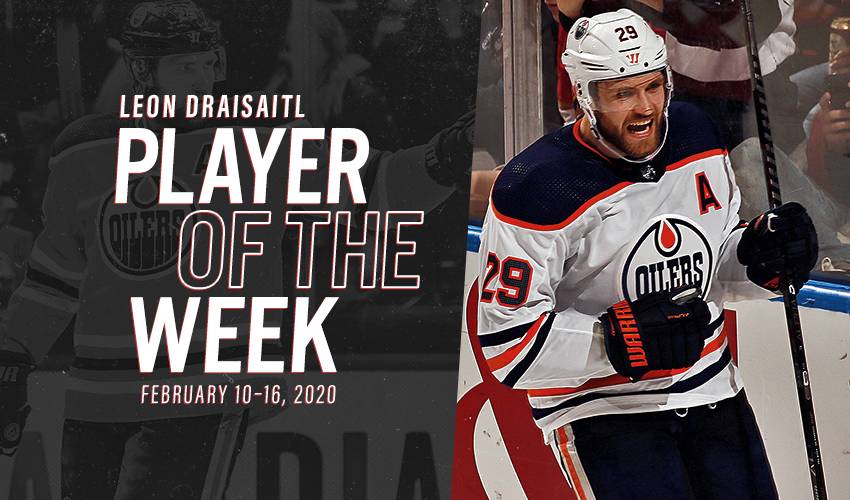 Leon Draisaitl stepped up in a big way for the Edmonton Oilers by leading the NHL in points for the week with 10, highlighted by a four-point effort Tuesday, February 11 against the Chicago Blackhawks.

With team captain Connor McDavid out of the lineup, the NHL’s leading scorer extended his point streak to five games and had three multi-point outings as the Oilers moved past the Vancouver Canucks for top spot in the Pacific Division. It’s no secret Edmonton’s success is driven by Draisaitl’s play, considering the team is 22-3-2 when he has multiple points in a game according to Sportsnet stats.

Draisaitl just needs five more points to break the 100-point mark for a second straight season, after becoming the first German player to do so, with 105 points in 2018-19. The Oilers forward has been on a scoring tear over the last calendar year by recording 130 points, with McDavid trailing him with 115.

#SportsnetStat 📊 Leon Draisaitl has the most points in the @NHL over the last calendar year with 130. Connor McDavid is second with 115. pic.twitter.com/TZTKrlduUn

With his efforts this past week, Draisaitl’s coaches and teammates firmly believe there is a good case for him to be considered a worthy Hart Trophy candidate.

“You look at what he’s doing for our team, without a doubt, he should be there,” said Oilers coach Dave Tippett.

“How could you not see him in that race?” defenceman Darnell Nurse said. “He’s such an important part of this team. He’s so valuable to us. When he’s playing like this, some nights he’s the single reason why we win games. It’s hard not to put him in that consideration.”

Draisaitl had a goal and three assists to help the Oilers beat the Chicago Blackhawks 5-3 at Rogers Place Tuesday night.

With the Oilers trailing 2-1 in the first period, teammate Kailer Yamamoto picked up the rebound off of Draisaitl’s initial shot for his sixth goal of the season.

After the Blackhawks would take a short-lived lead, Draisaitl set up Oilers forward Ryan Nugent-Hopkins for a shot in the slot, which was stopped by Blackhawks netminder Robin Lehner before Yamamoto picked up another rebound to score his second goal of the game.

After taking a 4-3 lead on Nugent-Hopkins’ 15th goal of the season, with Draisailt picking up his third helper, the Oilers’ leading scorer would put the game out of reach with an empty-netter.

Draisaitl extended his point streak to three games by recording an assist in the Oilers’ 3-1 loss to the Tampa Bay Lightning at Amalie Arena Thursday night.

Draisaitl helped Edmonton get their lone goal of the game by assisting on Oilers defenceman Caleb Jones’ third goal of the season – but that wasn’t his only contribution on the play. The Oilers forward had to stretch his foot to remain onside prior to his team scoring seconds after.

Full credit to Caleb Jones for his third goal, but Leon Draisaitl stretching at the line to get his toe onside is fantastic. What a play. pic.twitter.com/cD2N8QFWqF

Draisaitl scored a goal and an assist for his second multi-point game of the week, leading the Oilers to a 4-1 victory over the Florida Panthers at BB&T Center Saturday.

Holding a 1-0 lead in the third period, Draisaitl scored his 33rd goal of the 2019-20 campaign in what would also end up being his 10th game-winning goal of the season. Not only would that give him the NHL lead in game-deciding goals – but also the first Oilers player to score 10 GWGs since Jari Kurri in 1986-87.

Draisaitl added an assist on the Oilers’ empty-net goal as Edmonton picked up their third win in their last four games.

"He's confident," teammate Adam Larsson said of Draisaitl following the game. "He's extremely good defensively too. He has that and he's showing it lately. I think he is probably one of the best two-way players when he's on his game."

Draisaitl extended his point streak to five games with his second-straight multi-point outing in the Oilers’ 4-3 overtime victory Sunday against the Carolina Hurricanes at PNC Arena.

Down 1-0 in the first period, Draisaitl scored his 34th goal of the season on the power play as he found the loose puck in front of the net to put it past Panthers netminder James Reimer.

In overtime, Draisaitl set up Oilers teammate Josh Archibald for his 95th point of the season to help Edmonton move into first place in the Pacific Division. If Draisaitl were to reach 100 points before 61 games, he would be the first Oilers’ player since Wayne Gretzky did it back in the 1987-88 season.

While Draisaitl has been able to shine with McDavid out of the lineup, he credits the rest of the team for picking up their game, especially going through a tough stretch with three games on the road.

“We’re not a one-man team,” Draisaitl said about their recent stretch. “Obviously, our team is a lot better when Connor’s on it, but it’s nice that we’re able to grind out a few wins with him being away from the team.”

Draisaitl will look to keep his point streak going when the Oilers host the Boston Oilers February 19 and the Minnesota Wild February 21, before finishing the week on the road against the Los Angeles Kings February 23.