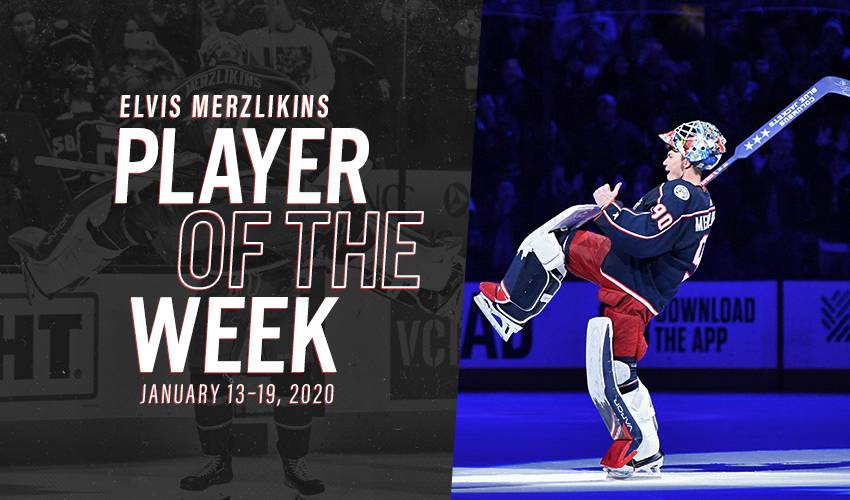 Elvis Merzlikins has taken the NHL by storm recently, posting two shutouts this past week including facing a career-best 41 shots in Saturday’s game to help the Columbus Blue Jackets to a perfect week.

Rookie @Merzly30 of the @BlueJacketsNHL joined rare company with his third shutout over a span of four starts.

Merzlikins made 34 saves to record back-to-back shutouts in the Columbus Blue Jackets’ 3-0 win over the Boston Bruins Tuesday night at Nationwide Arena. This performance followed a 27-save shutout Jan. 11 versus the Vegas Golden Knights.

It was the first time this season the Bruins were shutout in a game, although they did not make it easy on Merzlikins. Early in the third period, Bruins forward Charlie Coyle came in on a breakaway after Columbus got caught on a bad line change, forcing Merzlikins to make a nice blocker save.

With the win, Columbus improved to 12-2-4 over their past 18 games and Merzlikins became the first Blue Jackets goalie to have two straight shutouts since Sergei Bobrovsky last season.

Merzlikins also made sure to show his teammates some love after the game jumping into the arms of captain Nick Foligno.

''Tonight the team worked really hard,'' Merzlikins told reporters after the game. ''They tried to cut the chances for Boston. I think the team did a bigger part than me tonight. It's a team shutout. They did a big job blocking the shots, so thank you to them.''

Holding the Hurricanes off the scoresheet until the second period, Merzlikins set the third-longest shutout streak in team history at 166:29. He needed to be at his best considering Columbus only had 18 shots on goal.

Since taking over the starting job for his team in place of the injured Joonas Korpisalo on New Year’s Eve, Merzlikins is 8-2-0 with a .955 save percentage and 1.51 goals-against average. He also made sure to continue his post-game celebration with Foligno.

The victory was also head coach John Tortorella’s 200th win with Columbus, becoming just the 10th coach to do so with two different teams after Tortorella also had 239 with the Tampa Bay Lightning.

Merzlikins made a career-high 41 saves and recorded his third shutout in his last four starts in the Blue Jackets’ 5-0 win over the New Jersey Devils Saturday night at Nationwide Arena.

With Columbus up 1-0, Devils forward Jack Hughes stripped Columbus blueliner David Savard to get in alone on Merzlikins and unfortunately for Hughes, Merzlikins stretched across to deny him with a minute left in the period.

It wasn’t an easy night at the office for Merzlikins, who gave his team every chance to get their game together. He noted how he had to battle through some fatigue after facing 19 shots in the first period

''I think I was pretty lucky on a couple saves tonight, especially the last ones,'' Merzlikins told reporters after the game. ''I didn't have any reaction anymore working in my arms, so I was a little bit slow. Overall it was good game. We found a way.''

“I pretty much, kind of, know well my home, my net, my posts. And I just feel comfortable,” said Merzlikins of his growing comfort in net.

Even though he might have been tired after the game, that wasn’t going to stop Merzlikins from showing some love to his captain once again.

ARE Y’ALL HAVING A GOOD TIME TONIGHT? pic.twitter.com/DnHzaDpsA2

He also got a nice ovation when he was announced as the first star of the game and made sure to give the crowd some love for their support.

"My heart feels it. It's amazing."

Elvis was feeling the love all night in Nationwide Arena. pic.twitter.com/jekoKNcBUV

After beating the New York Rangers 2-1 with Matiss Kivlenieks in net on Sunday, Columbus will be looking to extend their five-game winning streak when they host the Winnipeg Jets Jan.22 before shutting things down for the 2020 NHL All-Star break.