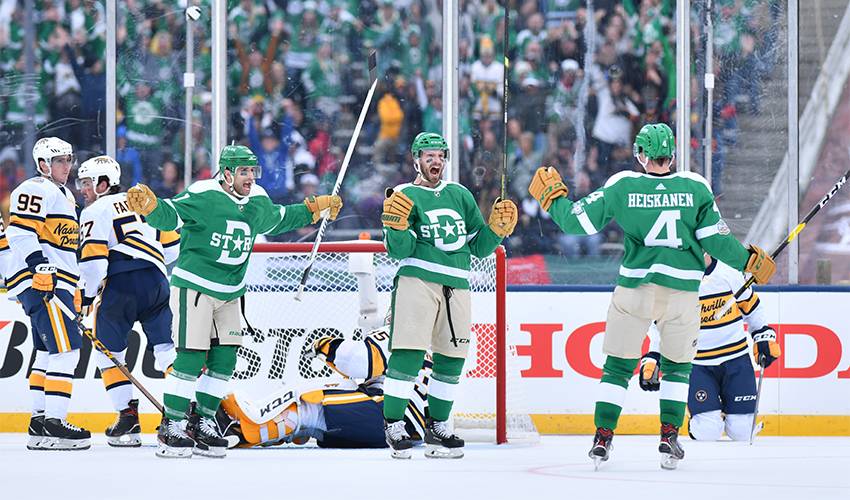 Alexander Radulov scored the game-winning goal as the Dallas Stars rebounded from a two-goal deficit to win the 2020 NHL Winter Classic in front of an appreciative sellout home crowd of 85,630.

Matt Duchene, named the game's third star, netted his ninth goal of the campaign with a power-play marker in the first period to give Nashville a 1-0 lead. Less than two minutes later, Duchene assisted Dante Fabbro on the man-advantage, to put the Predators in front 2-0.

The Preds were well-represented with roughly 20,000 fans in attendance, and one fan in particular was likely cheering the loudest for the opposing team.

With the help of the Bridgestone, Duchene brought fan and old pal Lochlin Morris and his family out to the gameas able to catch up the day before the game.

Dallas got on the scoresheet late in the second period courtesy of veteran forward Blake Comeau, who eared the game's first star and scored his fifth goal of the season with just over a minute remaining in the frame. The Stars proceeded to outshoot the Predators 24-22 heading into the third period.

All that Meadow Lake pond hockey paying off on the big stage. Blake Comeau cuts the lead in half – @DallasStars trail 2-1 after 40 minutes! #WinterClassic pic.twitter.com/pbDr08CJYq

Mattias Janmark knotted the game at 2-2 just 58 seconds in the third, with Radulov giving Dallas its first lead just over four minutes later. Andrej Sekera doubled the advantage soon after with his first goal of the season as the Stars piled on the pressure before warding off a late surge from the Predators.

Dallas eventually outshot Nashville 35-33 before skating away with the team's first win of 2020.

The stadium is just the third venue in the state of Texas to host a regular-season NHL contest along with American Airlines Center and Reunion Arena.

In 2008, the first NHL Winter Classic was played at Ralph Wilson Stadium in Orchard Park, New York. Pittsburgh got by Buffalo 2-1 in a shootout.