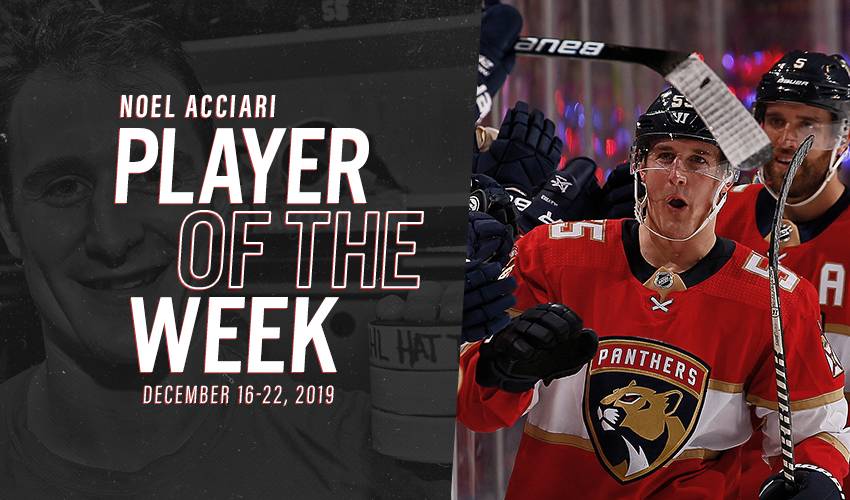 Noel Acciari led NHL goal-scoring for the week (7-1–8) by registering the first multi-goal game of his NHL career and matched the effort in the following game to complete back-to-back hat tricks.

With the holiday season around the corner, Acciari’s performances each were acknowledged with a timely donation to the charity of his choice through the NHLPA's partnership with Enterprise.

‘Tis the season to be jolly and nothing makes us happier than seeing player-supported charities get some love! @aduclair10, @88PKane, @DP_57 and Noel Acciari are the latest to get in on the @Enterprise Hat Trick Challenge action! pic.twitter.com/kLCUk9KLL0

With the barrage of goals, Acciari pushedhis season goal total to 12, a new career high, surpassing his 10 goals in 60 games with the Boston Bruins during the 2017-18 season.(reference)

The 28-year-old became just the second player in Florida Panthers’ history to score a hat trick in consecutive games after Pavel Bure did it back in 2001. He also earned a second nickname from his teammates in the process.

"He's like the best guy in the world, so to see him score back-to-back hat tricks, it couldn't happen to a better guy," Panthers’ centre Vincent Trocheck said about Acciari’s performances. “"It was a lot of fun watching him turn into 'Noel Gretzky' out there, so hopefully it continues.”

Noel Acciari notched his second hat trick in consecutive games during a thrilling 7-4 victory against the Dallas Stars tonight.

Acciari was previously dubbed “Cookie” by teammate Keith Yandle this season when there were no cookies made available during one of the team’s pregame meal. Based on his play as of late, we trust he’s been getting his fix of baked goods.

Acciari scored his first NHL career hat trick in the Panthers’ 6-1 victory over the Ottawa Senators at BB&T Center to end the team’s three-game losing streak.

Promoted to the second line with Jonathan Huberdeau and Vincent Trocheck, Acciari wasted no time getting on the scoresheet with his sixth goal of the season in the first period.

Early in the second period, Huberdeau and Acciari continued to show their new-found chemistry as Huberdeau made a couple of nice moves to set up Acciari in front of the net to double the Panthers’ lead.

It didn’t take long for Acciari to complete the hat trick scoring on a rebound in front of the net as fans tossed rubber rats from the stands.

"It's an awesome feeling," Acciari said about seeing the rubber rats coming from the stands. "It's part of being a Panther."

For the second consecutive game, Acciari scored a hat trick as the Panthers picked up their second straight win with a 7-4 victory over the Dallas Stars at BB&T Center.

With Florida up 4-1, Acciari would score his ninth goal of the season after Trochek set him up with a backhand pass in front of the net. Then, 32 seconds later, Acciari would cap off a nice passing play with his linemates for his tally second of the game.

Acciari would get another chance to see hats and rubber rats fly from the stands with the first penalty-shot attempt of his career. With the Panthers bench waiting in anticipation, Acciari got his shot to squeak past Dallas Stars netminder Anton Khudobin for his third goal of the game.

Scoring the trio of goals within a span of 3:59, Acciari would set a new franchise record for the fastest hat trick in history.

When asked about what was going through his mind on the penalty shot, Acciari made it clear he wanted to avoid embarrassing himself.

Question: What was going through your mind on the penalty shot?

Acciari extended his goal-scoring streak to three games as the Panthers won their third straight game with a 4-2 victory over the Carolina Hurricanes at PNC Arena.

With Florida ahead 3-1 in the third period, Acciari put the game out of reach with his 12th goal of the season, doubling his previous total from the 2018-19 season.

Not only did Acciari help the Panthers go 3-0-0 during the week, but Florida also won its first game in Carolina since Dec. 18, 2015. (reference) The victory also helped the Panthers move into third place in the Atlantic Division.

Acciari will look to extend his goal streak to four games when the Panthers take the short trip to Tampa Bay to play the Lightning Dec. 23, then end the week hosting the Detroit Red Wings Dec.28 and the Montreal Canadiens Dec. 29.