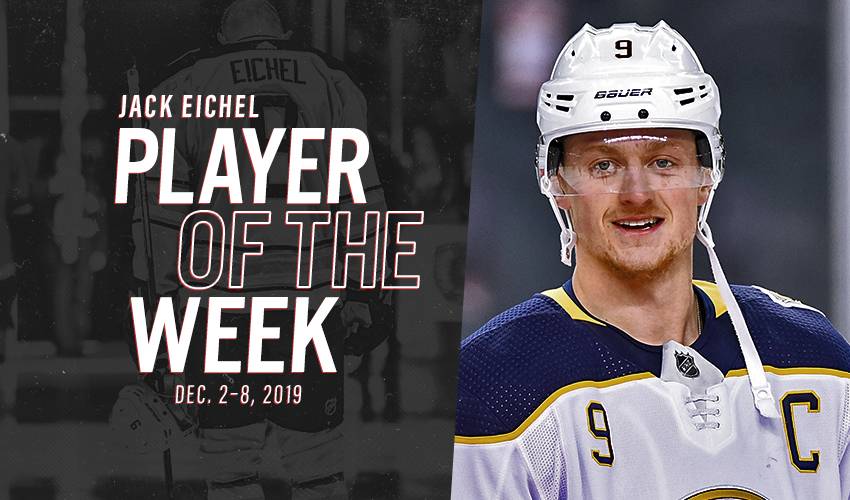 Jack Eichel scored seven points in four games (2-5–7), including a pair of multi-point performances this past week, to extend his point streak to a career-high 13 games, the longest active streak in the NHL.

Over the 13-game stretch, half of Eichel’s points have helped the Buffalo Sabres tie or take the lead. The second overall pick from the 2015 NHL Draft is currently on pace for his first season with 100 or more points in a season.

Not only is Eichel on his way to establishing a career-best season, but he is also being asked to play the most ice time in his career (21:40) and has a chance to match Tim Connolly's 16-game point streak, which is the longest in Sabres’ history.

"I think more than anything he's now a leader who understands that sometimes it's quality over quantity, and he can still concentrate on his game," Sabres head coach Ralph Krueger assessed Eichel’s contributions as a whole. “He's just been a very natural captain, he's enjoying it, he's communicating in a really good, consistent way and he's very positive in his influence on the team whether we've had a good day or a bad, and that's what we need to continue."

Eichel extended his point streak to 10 games, scoring a goal and adding two assists to help lead the Sabres to a 7-1 victory over the New Jersey Devils Monday at KeyBank Center.

The Sabres captain got his team on the board with the man-advantage for his 17th goal of the season as he was left wide open in front of the net.

He later added two assists in the third period for his seventh game with at least three points this season. Eichel joined Alexander Mogilny, Dave Andreychuk and Pierre Turgeon as the only Sabres players since the 1989-90 season to have multiple point streaks of 10-plus games.

Over his last 10 games since Nov. 16, Eichel also has the most points in the NHL with 19 to his name.

Eichel scored his 18th goal of the season to extend his point streak to 11 games as the Sabres lost 4-3 to the Calgary Flames Thursday at Scotiabank Saddledome.

With Calgary leading 3-1 heading into the third period, Eichel and the Sabres attempted to make a comeback with two late goals. No. 9 scoried the final tally of the game with less than a minute left to pull the team within a goal.

Eichel continued his point streak on the road as the Sabres lost 6-5 in overtime against the Vancouver Canucks on Saturday at Rogers Arena.

With two assists, Eichel’s point streak extended to a career-high 12 games for the longest active streak in the NHL.

In overtime, Eichel thought he had the game-winning goal, but teammate Henri Jokiharju was called for interference.

Jack Eichel is mind-blown that Henri Jokiharju got called for interference right before he scored in overtime pic.twitter.com/HGCvs3Md9g

Eichel extended his point streak to 13 games with an assist on the game-winning goal in the Sabres’ 3-2 overtime win to the Edmonton Oilers.

Eichel continues to be a crucial part of the Sabres' success with five points on the team’s tying goals and eight points on go-ahead goals this season – as well as five multi-point games during his streak.

Jack Eichel factored on the overtime goal to extend his point streak to 13 games.

Here is a behind-the-numbers look at the longest run of his career. #NHLStats pic.twitter.com/JW77M0pC5p

The Sabres’ victory helped the club end their week with a win but also gave head coach Ralph Krueger a victory against his former team – something he appreciated.

"It's real nice, they know the story and they know the history," Krueger said after the game. "We have an honest culture in there and we're just out for each other. It was a beautiful victory here especially because of the character we showed to get it."

Eichel looks to continue his point streak when the Sabres host the reigning Stanley Cup Champion St. Louis Blues on Dec. 10, then take on the Nashville Predators Dec. 12 and New York Islanders Dec. 14.