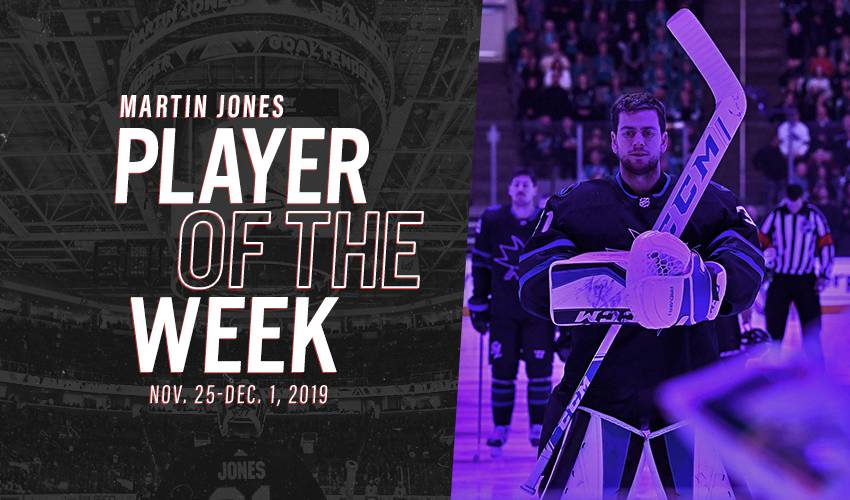 Martin Jones picked up three wins, two consecutively while appearing in back-to-back starts for the San Jose Sharks, to lead NHL netminders in the category this past week while also finishing November with 10 wins to lead all NHL goaltenders for the month.

Jones turned his game around in a big way for the Sharks with a November to remember after securing just two wins in October. The 29-year-old won 10 of his 12 starts last month, including four straight to help San Jose get back into a playoff position. He is now sitting tied for second in the league with 12 wins on the season.

Congrats to Martin Jones on earning his 150th win with the #SJSharks tonight 👏 pic.twitter.com/nNKzfEQkBO

Jones also picked up his 150th win in teal (166th NHL career win), inching him closer to Antti Niemi for second on the franchise’s win list.

Jones made 36 saves to pick up his second straight win in a 4-3 overtime victory over the Los Angeles Kings at Staples Center Monday.

With his 23rd overtime victory since joining the team in 2015-16, Jones tied Braden Holtby for the most in the NHL over that time.

“It's fun when you're winning games,” Nelson said postgame. “So right now, we're showing up, working hard and believing in each other. Off that, you can build confidence in a game."

Martin Jones has 23 OT wins since joining the team in 2015-16 and is tied for most in the NHL during that span (Braden Holtby, WSH). #SJSharks pic.twitter.com/xvjFa2C2uI

In his second game of the week against the Kings, Jones made 34 saves to lead the Sharks to a 4-1 victory at SAP Center Friday.

After receiving a night off with Aaron Dell getting the start Wednesday, Jones was back in the net for San Jose earning his third straight win and helping get the team back on track following a 5-1 loss to the Winnipeg Jets.

''We've got a lot of veteran guys in here,'' Jones said after the game. ''You go through it every year, tough stretches. It was pretty important to get it turned around as soon as you can and not let it spiral.''

Getting the call on back-to-back nights, Jones picked up his fourth straight win in the Sharks’ 4-2 comeback win over the Arizona Coyotes.

San Jose scored four unanswered goals to get out of a 2-0 hole, while picking up their eighth win in their last 10 games. They also extended their NHL record by winning their 45th consecutive game in which they have allowed fewer than three goals.

Jones came up big in the third period as Brad Richardson had the chance to tie the game for the Coyotes, but Jones got his blocker on his shot after dropping his stick.

The Sharks welcome the Washington Capitals Dec. 3, then head out on the road to take on the Carolina Hurricanes Dec. 5 before finishing the week with back-to-back games in Florida against the Tampa Bay Lightning Dec. 7 and Florida Panthers Dec. 8.