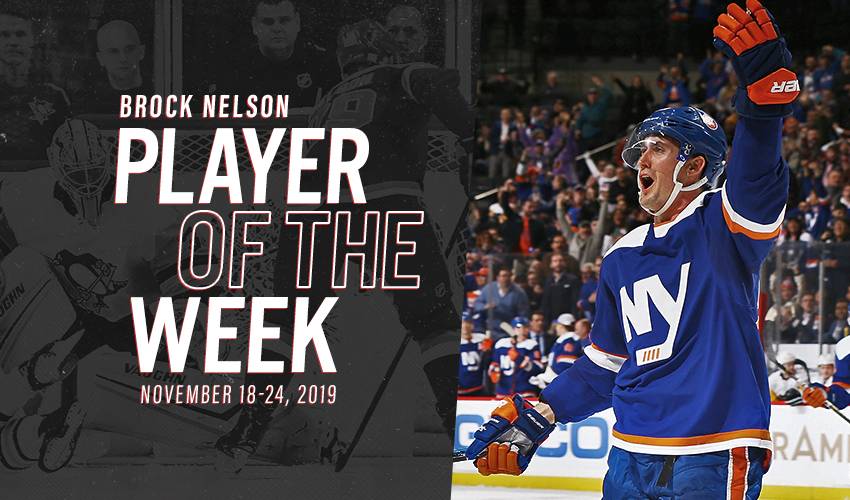 Brock Nelson scored five points in three games (4-1–5) as a difference-maker for the New York Islanders with a pair of consecutive multi-goal performances, including two overtime game-winning goals.

The 28-year-old celebrated his 500th NHL career game Nov. 21 with an overtime game-winner to help the Isles continue their impressive point streak, which was extended to 17 games Saturday.

Nelson’s heroics also got some recognition from his teammates with a new nickname.

Nelson brought a three-game point streak into the week and extended it to four games with two goals and an assist, including the overtime winner, in the Islanders’ 5-4 over the Pittsburgh Penguins at PPG Paints Arena Tuesday.

Trailing 2-0, Nelson helped the Islanders get on the board in the second period by assisting on Anthony Beauvillier’s goal before tying the game on a redirect off Nick Leddy’s point shot for his fifth of the season.

After overcoming a two-goal third period deficit, Nelson would complete the comeback with his sixth goal of the season after following up his own shot in overtime to score on the rebound. The victory extended the Islanders’ point streak to 15 games.

“It's fun when you're winning games,” Nelson said postgame. “So right now, we're showing up, working hard and believing in each other. Off that, you can build confidence in a game."

Thursday, in his 500th NHL career game, Nelson scored a pair of goals that included his second overtime game-winner of the week to help the Islanders beat the Penguins again in extra time, this time at Barclays Center.

The victory helped New York extend their point streak to a franchise-record of 16 games, beating out the previous mark set in the 1981-82 season.

Nelson extended his personal point streak to five games with his seventh goal of the season in the third period on the powerplay.

Two nights after sealing an Islanders comeback in overtime, Nelson beat Matt Murray again in the extra period with a goal of the week candidate. With the goal he became the first player in franchise history to score consecutive overtime game-winners.

It was a special night for Nelson, who had family make the long trip from Warroad, Minnesota, to watch him play in his 500th game.

“You remember milestones,” Nelson said after the overtime win over the Penguins. “First game, first goal and now 500th [game]. The way it played out, something you’ll remember for a while. Right now, it’s a big win for us, to kind of keep [the streak] alive.”

''We have a special group of guys in here,'' added Nelson. ''We have a lot of belief and confidence in everybody and we are finding ways to win.''

Nelson’s point streak would end at five Saturday but the Islanders would keep their team’s now 17-game point streak alive in the 2-1 overtime loss to the San Jose Sharks at SAP Center.

Over the course of his own point streak, Nelson posted four goals and five assists and is now second  overall in team scoring with 19 points in 21 games.

The Islanders will continue their road trip through California against the Anaheim Ducks Nov. 25 and the L.A. Kings Nov. 27 before returning home to host the Columbus Blue Jackets Nov. 30.