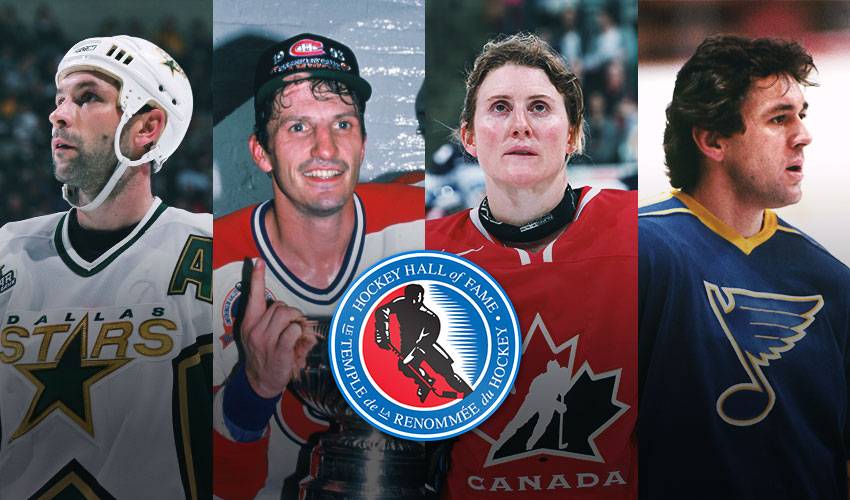 One of the cornerstone voices of hockey for 40 years, Jim Hughson will also be honoured with the Foster Hewitt Memorial Award while Frank Brown, a longtime hockey writer and NHL communications executive, will receive the Elmer Ferguson Memorial Award.

Guy Carbonneau went from being a perennial goal-scorer in the QMJHL for the Chicoutimi Saguenéens to one of the top defensive forwards in the NHL. In that time, the Sept-Iles, Quebec, native would go on to win three Stanley Cups and the Selke Trophy three times in five seasons.

With 663 regular season points tallied over 1,318 games, the defining moment of his NHL career came during the 1993 Stanley Cup Final when the Montreal Canadiens faced Wayne Gretzky and the Los Angeles Kings. After Gretzky had four points in Game 1, Carbonneau told Canadiens head coach Jacque Demers, “Give me Gretzky.” Demers agreed to the assignment, and for the remainder of the series, “The Great One” scored only three points in four games.

Carbonneau would later return to the Montreal Canadiens – where he had served as captain for four seasons – as an associate coach before being named head coach in 2006-07, a position he would hold for three seasons.

It did not take Sergei Zubov long to show that he was the prototypical offensive defenceman the New York Rangers were after when they drafted him in the fifth round of the 1990 NHL Draft.

During his first full season with the Rangers in 1993-94, Zubov had a career-high 77 assists and 89 points while adding 19 points in 22 playoff games. He won a Stanley Cup with New York that spring and then again with the Dallas Stars in 1998-99. He also won a gold medal with the Unified Team at the 1992 Winter Olympic Games and played in four NHL All-Star games. He remains the second-highest scorer among Russian blueliners with 771 points in 1,068 games, and his 619 assists rank first among Russian defencemen.

At one point in his life, Vaclav Nedomansky was known as the greatest hockey player not playing in the NHL. That all changed in 1974 when he became the first Eastern European player to defect from a communist country in order to play in North America after the Soviet Union invaded Czechoslovakia.

Vaclav Nedomansky was the first athlete from an Eastern European communist country to defect to North America to pursue a career in pro hockey. He appeared in 421 career NHL games from 1977-1983 and averaged more than a point per game in the WHA from 1974-77. #NHLStats #HHOF2019 pic.twitter.com/ia0dXNYm8b

He would play four seasons in the WHA with the Toronto Toros and Birmingham Bulls where he tallied 253 points (135 goals, 118 assists) in 252 games before getting traded to the Detroit Red Wings. He would play five seasons with Detroit before finishing his career with the New York Rangers and St. Louis Blues, scoring 278 points (122 goals, 156 assists) in 421 NHL games.

Nedomansky led Czechoslovakia to a silver medal at the 1968 Olympics and a bronze medal at the 1972 Olympics. He also represented his country nine times at the World Championship, winning eight medals including a gold medal in 1972.

After his playing career, Nedomansky would work as a scout for various NHL teams like the Vegas Golden Knights and was a part of Team Europe’s management group for the World Cup of Hockey 2016.

🚨 BIG NED documentary website is live! 🚨
The story of Vaclav Nedomansky...the first hockey player to defect during the Cold War and play in the @NHL. A story of hockey, espionage, betrayal and the quest for freedom.https://t.co/8uTQxFRvH0 pic.twitter.com/7KpTVPdjPB

It is tough to find a player who dominated the women’s game like Hayley Wickenheiser did for 23 years. The Shaunavon, Saskatchewan native led the Canadian women’s national team to five Olympic medals (four golds, one silver) in six appearances (five Winter Olympics, one Summer Olympics for softball), 7 World Championship titles and was named the most valuable player at the Olympics twice – in 2002 and 2006.

She is also the all-time leading Olympic women's scorer with 51 points (18 goals, 33 assists) in 26 games. She also attended rookie camp with the Philadelphia Flyers in 1998 and 1999 and became the first female player that wasn’t a goalie to play (and score a point in) professional hockey full-time, when she did so in Finland's third-division league.

Wickenheiser continues to make her impact on the game as the assistant director of player development for the Toronto Maple Leafs while going to medical school at the University of Calgary.

Just stepped out of a med school course to the news. A huge honour and dream come true for a little girl from Shaunavon, Sask.. Congrats to Guy,Sergei,Vaclav,Jim and Jerry. Thank you for all the kind words. #HHOF2019 pic.twitter.com/HioA3rt26R

Entering the hall in the builder category, Jim Rutherford played 457 games in the NHL as a goaltender and became known as one of the first to decorate his mask in 1976. After retiring from the league as a player, he would become the general manager of the Carolina Hurricanes, helping the team win their first Stanley Cup in 2006 before moving on to join the Pittsburgh Penguins in 2014 where the Penguins would win back-to-back Stanley Cup titles (2016, 2017).

The 70-year-old became the first GM since the NHL expanded in 1967 to lead two different teams to a Stanley Cup, and was named NHL General Manager of the Year at the NHL Awards in 2016.

The winningest active coach in NCAA history will become the fifth NCAA to get his call to the Great Hall. He joins fellow former college hockey bench bosses Herb Brooks, Bob Johnson, Lou Lamoriello and John Mariucci. He has won five NCAA national championships (four with Boston College) compiling a 1067-650-120 record with a .614 winning percentage.

Three-time Stanley Cup champion Guy Carbonneau offers up his Top 5 bits of advice for young players when it comes to playoff hockey.