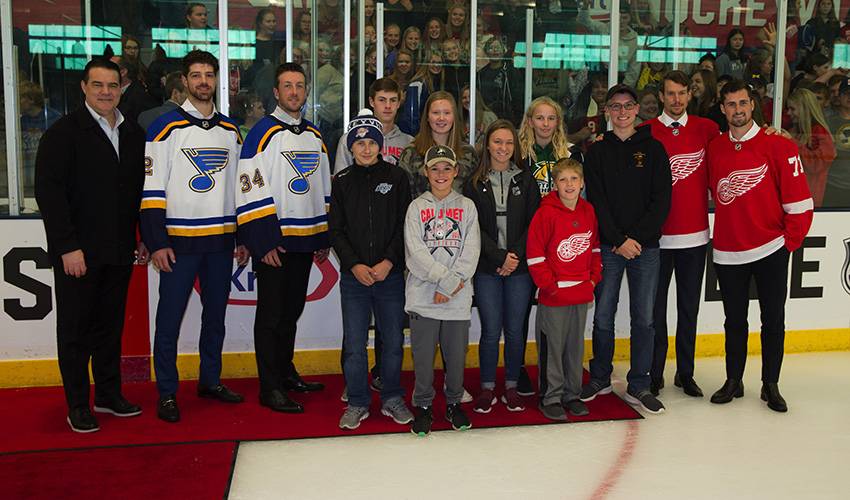 With its deep hockey history, an ‘Original Six’ franchise with multiple Stanley Cups and some of the greatest players in the history of the game - the handle of “Hockeytown USA” has always been an accurate one for Detroit. That is until this week.

Another Michigan community has wrestled the title away from the Motor City, at least for this week, as Calumet became the center of the American hockey world as the host of Kraft Hockeyville USA.

The small mining community of around 1,000 residents, located in the northwestern part of the Upper Peninsula, has been passionately showcasing their community and their dedicated love for the game of hockey, culminating in their hosting of the Detroit Red Wings and St. Louis Blues in a pre-season game at the historic Calumet Colosseum.

Calumet was crowned Kraft Hockeyville USA after receiving overwhelming support and votes from the local residents, beating out a number of other communities around the United States to claim the title.

Along with the title of Kraft Hockeyville USA 2019, Calumet also received $150,000 from Kraft for arena upgrades at the historic Calumet Colosseum, the community’s local rink. Claimed as the oldest indoor hockey arena in North America, the arena is a pillar of the community, hosting minor and high school hockey and competitive senior squads. The funds acquired by being Kraft Hockeyville USA will go towards ensuring the arena remains a functional focal point of Calumet for years to come.

Calumet opened its doors over the weekend and into the early part of the week with a number of community events taking place under the Kraft Hockeyville banner that featured NHL Alumni as well as the Stanley Cup.

The passion for the Red Wings runs deep here and the fans were out in droves in beautiful early autumn weather to enjoy the festivities. But the pinnacle of the week, and what the entire community was waiting for, was the arrival of the Red Wings and the Blues on Thursday.

With a throng of fans (including many enthusiastic school children) packed in front of the Calumet Colosseum, the player arrivals did not disappoint. The chance to see many of their favourite players walking into the rink that they themselves play in, was a special moment.

The morning skates took place in front of a packed house in the arena with the local school children providing the atmosphere with cheers, chants and starting the wave. There was no doubt that this was Red Wings country by the number of sweaters evident in the stands.

Following the morning skates, Dylan Larkin and Danny DeKeyser of the Red Wings and Zach Sanford and Jake Allen of the Blues were joined by NHLPA Divisional Player Representative Joe Reekie and a number of local Calumet minor hockey players in celebrating a donation from NHLPA Goals & Dreams of $10,000 worth of brand new hockey equipment. The donation is part of the Kraft Hockeyville USA 2019 grand prize and a lasting legacy of the players participation in the Kraft Hockeyville program.

The focus then turned to game night, with the Red Wings and Blues taking the ice in front of a capacity crowd eager to see an NHL game in their hometown arena.

The Red Wings jumped out to an early 2-0 lead and never looked back, taking the game by a score of 4-1, to the delight of Calumet fans.

Calumet was an incredible host and this year’s Kraft Hockeyville USA week is something this community will never forget.