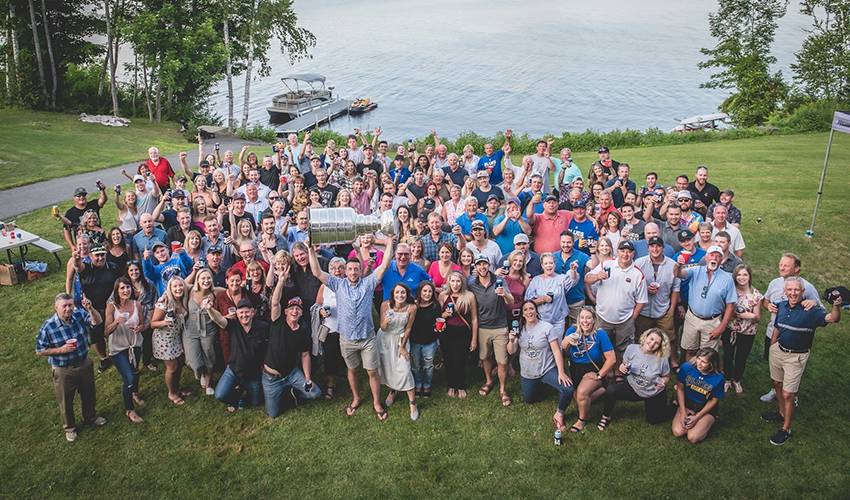 He’s paid tribute to his home province in a number of ways, including a his most recent colourful homage in 2018.

The native of Fredericton, New Brunswick native had renowned mask artist David Gunnarsson come up with a design that feature the St. Louis Blues’ logo and alternate logo they used from 1995-1998, as well as the ship from New Brunswick’s flag.

Allen, who has also used other masks depicting his native land, hasn’t stopped there when it comes to giving some love to home.

From bringing the Stanley Cup to his hometown this past summer to turning out to Tom Donovan Arena in Renous, New Brunswick, to help present the community with their 2019 Kraft Hockeyville winning banner and to sign autographs for fans, Allen is dedicated to giving back to the province at every turn.

What a session! Thanks to the @CityFredGov @FredTourism and everyone who celebrated with us yesterday. A day we will never forget. pic.twitter.com/H2ghAviqfI

Awesome turn out at the Tom Donovan Arena in Renous, NB where Jake Allen of the St. Louis Blues presented the community with their 2019 #KraftHockeyville winning banner and signed autographs for fans! #LetsRally pic.twitter.com/o0Ig0CGx2B

Four years ago, the 29-year-old, who was part of the Blues’ Stanley Cup-winning squad this past season, launched Program 34, a nonprofit organization that supports and raises money for New Brunswick charities.

Over the years, the foundation has directed funds towards research for autism, cancer, diabetes, as well as donations to Special Olympics, community food centres, and more.

To date, Allen’s program has raised over $300,000 in donations and in-kind support.

“I created Program 34 in 2015,” started Allen. “Every year, we select different beneficiaries from local organizations in our province. This year, we selected Chalmers Hospital Foundation, Hockey New Brunswick, and Kingswood’s Turn Around Achievement Awards.”

Allen, who also hosts a charity golf tournament each summer, has a personal tie to Hockey New Brunswick.

“It was a program I participated in as a youth. It brought me up through the ranks. They oversee the whole minor hockey game in the province, and have an understanding of what is going on. I reached out to them to see if they needed any assistance. We made a plan that they are going to donate money back to certain regions that are close to me, and that have had an influence on my life.”

“We are very appreciative to receive the funding from Jake Allen and Program 34,” said Nic Jansen, Executive Director with Hockey New Brunswick. “This funding will be used to help underprivileged children access hockey programs in New Brunswick.”

Thanks to our amazing sponsors, golfers and supportive community, we were able to donate $60,000 from the 2019 JAC to 3 deserving organizations that we will continue to build strong partnerships with! @ChalmersFdn @HockeyNB @kingswood_park Turnaround Achievement Awards! #thankyou pic.twitter.com/52QcBmPVJN

Drafted 34th overall by the Blues in 2008, Allen’s deep affinity for New Brunswick, and for working to shine the spotlight on its hockey culture, remains an important part of his life.

He’d like to see more local players find their way to the NHL ranks.

“I’m very proud in the sense that although we haven’t produced a ton of hockey players that made the NHL, we’ve produced lot of good ones. I feel that I’m on a platform that I’m able to give back to the community, and show what we’re all about. I feel like we’re one of the hidden gems of Canada that doesn’t get talked about a whole lot, but there are great people here, and it’s a great way of life. Through our Program 34, we’ve raised almost $300,000 to give back to the province in the past four years. Hopefully, there’s a lot more to come.

“My whole family is from here, and hasn’t left. My wife is from there, and our kids just got their Canadian citizenship… they’re part New Brunswickers now. It’s a great spot to live and grow up in.”

Nearly 270 games into his NHL career, Allen admitted time seems to have flown by quickly.

He can still recall the days he was part of Hockey New Brunswick, when he’d dream of what it would be like to step into the NHL spotlight one day.

“It’s obviously very surreal,” said Allen, who has 136 career wins, and 19 shutouts. “It sinks in more and more every day as you go on throughout the summer, and into training camp. You start out playing for the enjoyment, the fun, and the love of the game. Then you reach a point in your career where there’s a chance to make it to a higher level. You just roll with it, with a love and passion for it. One day you’re an eight-year-old strapping on the pads in New Brunswick, and now you’re in the NHL.”

Allen remains humbled and appreciative to have the opportunity to share his love for hockey with young players in New Brunswick, while also assisting worthy initiatives throughout the province.

“I’m proud of the way the community supports the program. To me, that shows they are very willing to support what myself and my wife are doing with it. It’s a small community, but one with a lot of heart. They’re helping me give back to our province. We spread the wealth with the beneficiaries. My goal is to get to the half-million dollar mark over the next couple of years, see where we are, and go from there. It’s easy to want to give back here.”

Jansen is grateful for Allen’s efforts.

“We continue to be impressed with Jake’s willingness and commitment to give back to his home province. Jake is the ultimate role model, and we’re extremely proud to be associated with him and Program 34.”

Best of luck to @WeAreRenous in @hockeyville today back in Bathurst, NB. Enjoy the day as you deserve every second of it for what you accomplished as a community and in the memory of Thomas Dunn. Congratulations!