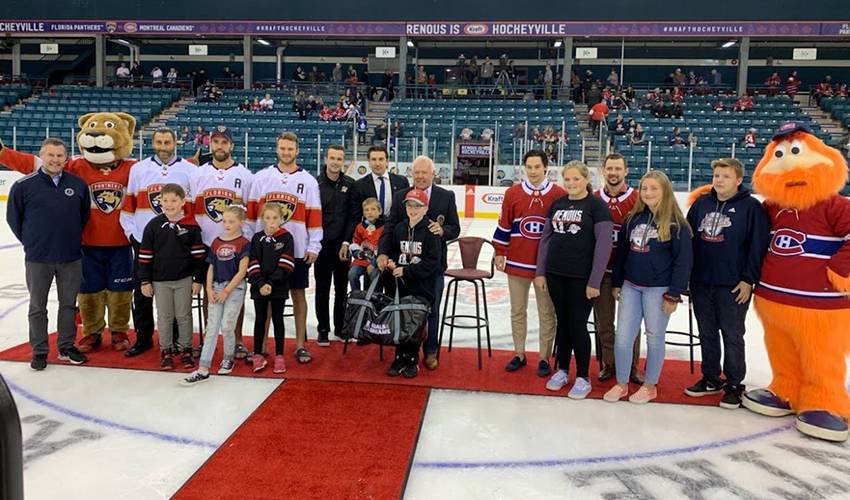 The community, located in the northwestern part of the province, has less than 1,000 residents who put their love of community and hockey on full display over the past four days, culminating in an exciting NHL pre-season game between the Montreal Canadiens and Florida Panthers.

Renous initially campaigned to be named Kraft Hockeville in honour of 14-year-old Thomas Dunn, an aspiring hockey player who was tragically killed in a dirt bike accident. With the sentiment of support playing a role, along with passionate community spirit and an over-whelming voter base, Renous was ultimately crowned Kraft Hockeyville 2019.

The festivities got underway over the weekend and with a number of events and celebrations all wrapped in the Kraft Hockeyville banner.

Bringing residents from all over the region to their small town, Renous was more than happy to be the centre of the hockey world in Canada for the week, culminating with the Habs and Panthers facing off in the pinnacle event.

Wednesday morning felt like hockey, with brisk and cool temperatures in the region. This did nothing to dampen the excitement as more than 1,000 people gathered out front of the K.C. Irving Centre in Bathurst, New Brunswick, for the arrival of the Canadiens and Panthers players.

Both teams took the ice for their morning skates to a packed crowd, dominated by hundreds of school children from Renous and the Miramichi region. The thrill of seeing some of their favourite players and hockey heroes showcasing their skill was clearly evident when looking around the stands.

Following the morning skate, Aaron Ekblad and Jonathan Huberdeau of the Panthers alongside Charles Hudon and Tomas Tatar of the Canadiens were joined by former NHLPA members and NHL alumni including Yvan Cournoyer, Roberto Luongo, and Chris Campoli acting in his role of NHLPA Divisional Player Representative. The group met with a number of local Renous minor hockey players in celebrating a donation from NHLPA Goals & Dreams of $10,000 worth of brand new hockey equipment. The donation is part of the Kraft Hockeyville 2019 grand prize and a lasting legacy of the players' participation in the Kraft Hockeyville program.

After the practices wrapped up Wednesday, the community was still buzzing in anticipation of the game still to be played between the Canadiens and Panthers.

Fans filed in and filled the K.C. Irving Centre in Bathurst, with the Canadiens definitely dominating the stands with the bleu, blanc et rouge.

The two teams dazzled the crowd with an up-tempo, highly competitive and close game. The Canadiens would score twice in the third period, including the game-winner coming short-handed late in the final frame, to give them a 4-3 victory.

A 4-3 final for the @CanadiensMTL closes out #KraftHockeyville 2019.

Renous was the little town that could and the centre of the hockey world this past week and the community now has the prospect of a completely renovated arena and $10,000 of brand new hockey equipment as the lasting legacy of their incredible achievement.