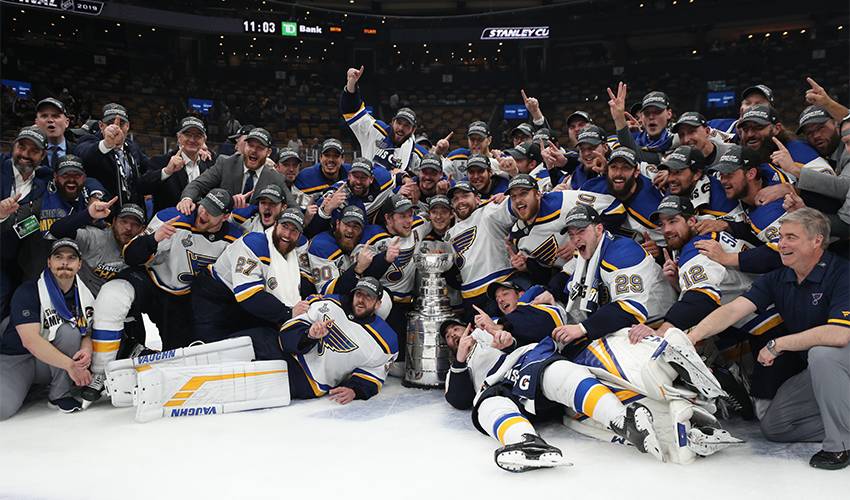 After splitting the opening two contests on the road, losing Game 1 by a score of 4-2 and winning Game 2 in overtime (3-2), the Blues returned to Missouri for the next two contests, losing 7-2 and winning 4-2 in Game 3 and Game 4, respectively.

With the series shifting back to TD Garden for Game 5, David Perron scored the eventual winner and Jordan Binnington made 38 stops in a 2-1 St. Louis victory.

The back-and-forth series saw Boston down the Blues 5-1 in Game 6, setting up the winner-takes-all showdown in Massachusetts.

Ryan O’Reilly opened the scoring in the first period, netting his eighth goal of the playoffs at 16:47. Alex Pietrangelo then padded the Blues lead with just eight seconds left on the clock. After a scoreless second period, Brayden Schenn made it 3-0 at 11:25 of the third, with teammate Zach Sanford lighting the lamp to make it 4-0 at 15:22. Matt Grzelcyk scored the Bruins lone goal with 2:10 left. Binnington turned aside 32 shots en route to his second shutout of the postseason.

St. Louis, which celebrated its first Cup title since the franchise was founded in 1967, defeated Winnipeg in the Western Conference quarterfinals, Dallas in the semifinals and San Jose in the West Final, to punch its ticket to the Cup Final.

O’Reilly, who came to St. Louis via a trade with Buffalo on July 1, 2018, was named the Conn Smythe Trophy winner. In 26 playoff games, he recorded eight goals and 15 assists for 23 points.

His 23 points are the most ever in one @StLouisBlues postseason.

Congratulations to the 2019 Stanley Cup Champion St. Louis Blues, from the staff and members of the National Hockey League Players’ Association.