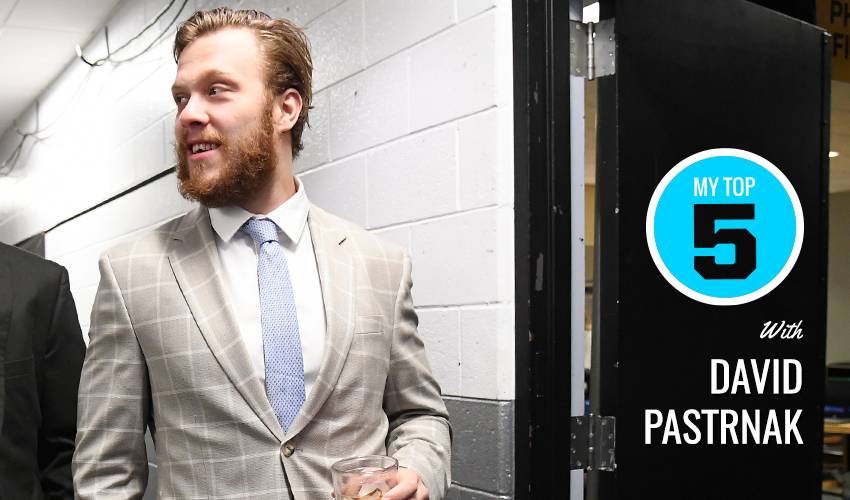 David Pastrnak has already netted a career-best seven playoff goals for the Boston Bruins in the 2018-19 Stanley Cup Playoffs.

In 18 games, the Czech Republic native has 15 points, two game-winning goals and a plus-5 rating.

After a career-best 38 goals in the regular season, Pastrnak continues to be an offensive catalyst for the Bruins.

Pastrnak, who played his first NHL campaign in 2014-15, has a handful of hat tricks in his career. Four of them came in the regular season and the other came in the post-season, a trio of tallies against Toronto in Game 2 of their 2017-18 Eastern Conference First Round series.

In 2018, Pastrnak became the first player since Philadelphia Flyers captain Claude Giroux in 2012 and only the sixth player overall to have a three-goal, three-assist playoff game. At 21 years, 324 days, he surpassed Wayne Gretzky (22 years, 81 days) as the youngest player to register a six-point game in the playoffs.

As he walked on stage at Wells Fargo Center in Philadelphia as the 25th player selected in the 2014 NHL Draft, Pastrnak kissed his hand and pointed upwards, paying tribute to his father, Milan, who passed away from cancer 13 months earlier. On January 10, 2015, at the same arena, Pastrnak scored his first two NHL goals in a 3-1 win.

5. Coming out of his shell

When the Boston Bruins made their annual visit to Boston Children's Hospital around Halloween a few years ago, Pastrnak and some of his teammates dressed up as characters from Teenage Mutant Ninja Turtles. His character of choice? Michelangelo.

Carlo as Bebop
Pastrnak as Michelangelo
Krug as Leonardo
Marchand as Splinter
Liles as Raphael
Heinen as Donatello pic.twitter.com/Ky0ooZ6BTN