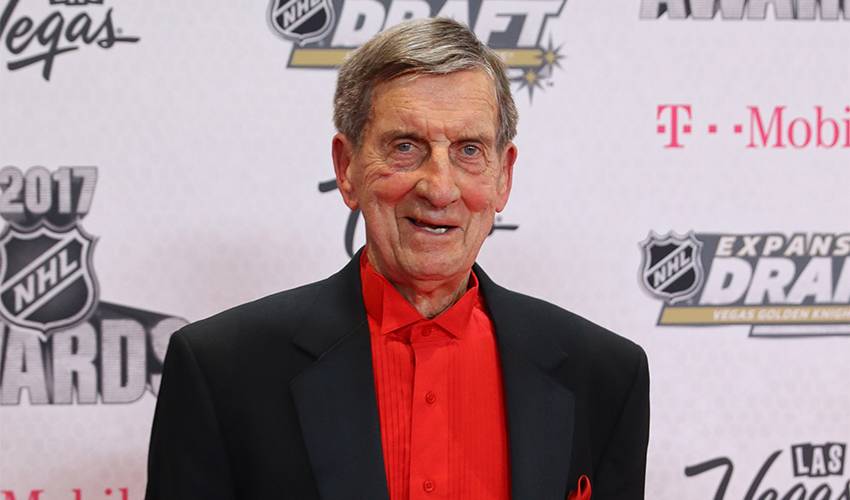 A trailblazer on and off the ice, Ted left his mark on the game as a Hockey Hall of Famer. He made great sacrifices in his career when he fought for player rights to start the original PA in 1957. Ted’s foundation has supported autism research and educational programs since 2001.

All NHLPA members, current and former, owe a great deal of gratitude to Ted.

In addition to his Hall of Fame playing career, Ted was instrumental in organizing the original Players’ Association in 1957 to promote, foster, and protect the interests of players. Ted’s efforts helped lay the groundwork for the formation of the current NHLPA. In a tribute to his namesake, the Lester B. Pearson Award was reintroduced as the Ted Lindsay Award in 2010 to pay homage to Ted’s skill, tenacity, leadership, and for his role in establishing the original Players’ Association.

Ted Lindsay was born July 29, 1925 in Renfrew, Ontario. From birth, he seemed destined to be a hockey player. His father, Bert, played professional hockey as a goaltender for several teams in the National Hockey Association, as well as for a pair of NHL teams, before retiring after the 1918-19 season. When the Great Depression hit in 1929, the Lindsay family moved north from Renfrew to Kirkland Lake, Ontario, so that Bert could work in the gold mines. It was in Kirkland Lake where Ted grew up, went to school and began to develop the hockey skills that would ultimately lead him to his career as a star player in the NHL.

Hockey quickly became his childhood passion, and he was involved in the game in Kirkland Lake right through 1941-42 when he helped lead his hometown juvenile team to an Ontario Minor Hockey Association provincial title. The following year, Ted went to play junior hockey in Toronto for the St. Michael’s Majors. It was during his time with the Majors that Carson Cooper, the chief scout for Detroit, came to him for the first time expressing interest in making him a Red Wing.

Before reaching the professional ranks, Ted was added to an Oshawa Generals lineup that would capture the 1944 Memorial Cup – emblematic of major junior hockey supremacy in Canada. That championship would be the final chapter in Ted’s amateur hockey career, as he earned a spot in the Red Wings’ lineup as a 19-year-old the following season. He spent the next 13 seasons playing left wing for Detroit, helping the team become an NHL powerhouse.

From 1944-45 to 1956-57, Ted was part of a Red Wings team that won four Stanley Cups (1949-50, 1951-52, 1953-54, 1954-55) and boasted the top line in the league, of which he was a key part of, along with Gordie Howe on the right wing and Sid Abel at centre. The “Production Line” as they were known, did just that, with “Terrible Ted” serving as a fiery contributor who could fill up the score-sheet with goals and assists, as well as play a tough, physical brand of hockey. For his play in the 1949-50 season, Ted was crowned the Art Ross Trophy winner as the league’s leading scorer with 78 points in 69 games. In typical Ted Lindsay fashion, the 141 penalty minutes he racked up that season revealed nearly as much about the type of player he was as the offensive output did.

Ted only stood 5’8” and weighed 168 pounds in his playing days, but despite being small in stature, he gave nothing away to any other player in the league. He fought for his space on the ice, as well as for his teammates, and his on-ice skirmishes are the stuff of hockey legend. He did whatever it took to win. During his first 13 seasons wearing the “Spoked Wheel”, Ted would score 321 goals and add 403 assists, while being named a first-team All-Star eight times. The final season of his first tour of duty with Detroit, 1956-57, saw him establish a new career-high in points (85), while leading the league in assists (55).

As a key member in leading the movement to establish the original Players’ Association in 1957, with the assistance of fellow players, Bill Gadsby, Doug Harvey, Fern Flaman, Gus Mortson, Jim Thomson and others, Ted paid a steep price for his efforts on behalf of his fellow players. He was first stripped of his Red Wings captaincy and then, following his best statistical season in the NHL, Ted was traded July 23, 1957 from a very strong Red Wings team to the Blackhawks, who at the time were struggling at the bottom of the standings. Ted played for three seasons in a Blackhawks uniform, helping lead them to the postseason in his final two years with the club.

Following the 1959-60 season, Ted announced his retirement and moved on to other pursuits away from hockey. After a few years away from the game, he approached former linemate Sid Abel, then Red Wings’ general manager and coach, to express his interest in doing colour commentary, just to be involved with the team. Abel asked him to come back and play, instead. Ted, always one to keep himself in good shape, went against the advice of family and friends, making a comeback at the age of 39 for the 1964-65 season. His desire to retire in a Red Wings uniform proved too great for him to resist any longer, and he proved all doubters wrong that he could still play the game at a high level, including then NHL president Clarence Campbell. Ted retired from his playing days for a second and final time after the end of the season, but what meant the most to him was wearing the Detroit jersey one more time – the last jersey he would wear as a player.

Not long after retiring, Ted was inducted into the Hockey Hall of Fame in 1966, in recognition of a career that saw him record totals of 379 goals, 472 assists and 851 points in 1,068 games. He would eventually serve as the team’s coach and general manager, and he enjoyed having an eternal bond with the fans of Detroit as one of its most cherished alumni. On November 10, 1991, Ted’s No. 7 jersey was retired by the Detroit Red Wings on the same night as former linemate Alex Delvecchio’s No. 10 jersey was raised to the Joe Louis Arena rafters.

While the Ted Lindsay Award trophy was being developed, Ted and his wife, Joanne, were deeply involved throughout the process by providing creative input on the design. April 29, 2010, Ted, Joanne, and their entire family were on hand for the special ceremony at the Hockey Hall of Fame in Toronto. Since the Ted Lindsay Award was reintroduced, Ted has presented the award on stage at the NHL Awards six times. The Ted Lindsay Award remains the only award voted on by the players themselves, and is considered one of the highest honours among players.

Following the conclusion of his playing days, Ted remained in the Detroit area with his wife Joanne and his family and remained a beloved fixture around Joe Louis Arena and the Red Wings organization. Joanne and Ted were married for 28 years before she passed away Feb. 23, 2017 at the age of 81, following a battle with peritoneal cancer.

Ted’s charitable work is a legacy of his, highlighted by the significant contributions his foundation made over the years. Since 2001, through the Ted Lindsay Foundation’s efforts, over $3.4 million has been used to support autism research and educational programs. Twice in the last few years the foundation has made donations of over $1 million each – first in 2016, with the creation of the Ted Lindsay Foundation HOPE Center at Beaumont Children's Hospital; and most recently in December 2018, the foundation pledged $1 million to the Oakland University Center for Autism Outreach Services (OUCARES), which is now known as the Joanne and Ted Lindsay Foundation Autism Outreach Services at Oakland University.