State of the art outdoor rink opens at Camp Manitou

NHL and NHLPA support TNYF in growing the game of hockey. 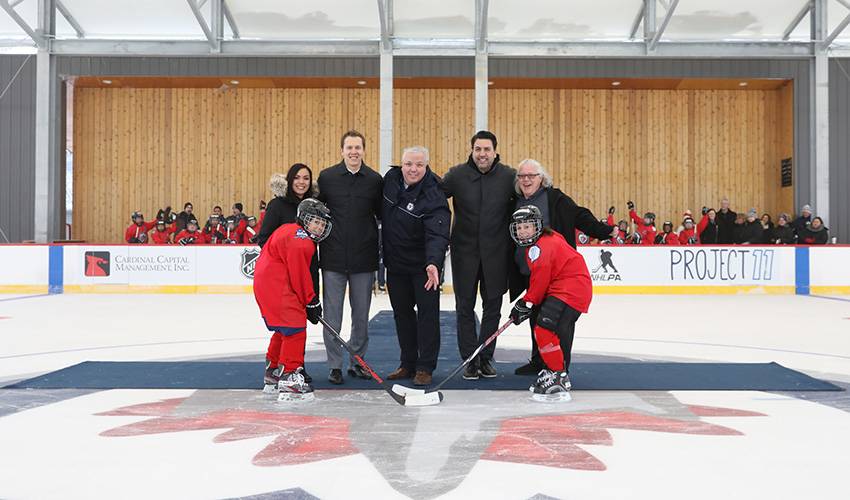 A new state of the art outdoor hockey rink was officially unveiled today at Camp Manitou, supporting the True North Youth Foundation’s (TNYF) commitment to the continued growth of camp amenities and to developing and maintaining year-round programming.

The rink was funded in part by the Industry Growth Fund, which is an initiative of the NHL and National Hockey League Players’ Association (NHLPA). Supporting the construction of the outdoor rink affirms the TNYF’s goal of growing the game of hockey by attracting new participants and providing new opportunities, which the new rink will facilitate with accessible ice time and new rink amenities.

“This is a great example of a Club working with the Industry Growth Fund to promote sport in their community by building a long-term facility open to minor hockey teams, schools, and residents,” said Rob Knesaurek, NHL Executive Vice President, Industry Growth Fund Initiatives. “The League is proud to support the Winnipeg Jets and True North Youth Foundation who are dedicated to fostering strong communities across the province.”

Knesaurek, along with Rob Zepp, NHLPA Manager of Special Projects, were at the rink’s opening, doing the honours of dropping the ceremonial puck before a group of Grade 4 and 5 students inaugurated the freshly logo-ed ice as part of their weekly Winnipeg Jets Hockey Academy (WJHA) sessions.

“The NHLPA is proud to support, through the Industry Growth Fund, the tremendous work the Jets are doing to engage and inspire new hockey fans and players in their community and across Manitoba,” said NHLPA Manager of Special Projects, Rob Zepp. “We are excited about the opening of the rink at Camp Manitou as it is an excellent example of these efforts to grow the sport by introducing new participants and their families to the game we all love.”

Camp Manitou’s new outdoor rink is unique in that it is the only rink in Manitoba that is not completely enclosed but that has a roof to keep out snow and minimize the impact of the sun on ice melt in the fall and spring, allowing the rink to be operational for upwards of six months of the year between early October and early April.

The systems used to build the rink and maintain the ice are very similar to those used by the NHL in creating outdoor rinks over the last decade, including the temporary rink built at Investors Group Field for the 2016 Tim Hortons NHL Heritage Classic. Plastic pipes are laid on top of an asphalt base in the fall and are sprayed with water that freezes through the power generated by the ice plant. The pipes are then removed each spring.

“Not only does the covered rink extend the ice season, but also offers much needed rainy day space for campers throughout the summer and will be used rain or shine for a host of camp activities,” said Rick Bochinski, Director of Camp Manitou.

The boards and glass used at the rink bring a little bit of the NHL to Camp Manitou as they were formerly used at Winnipeg Jets and Manitoba Moose games at Bell MTS Place.

The rink will primarily be used to accommodate hockey practices for WJHA minor hockey teams as well as for rental groups and schools that have booked other camp facilities.

“Minor hockey teams are an important part of our overall WJHA programming,” said Bochinski. “Having a dedicated rink for practices brings consistency and opportunity for these kids who are getting so much more than hockey skills out of their experience.”

The True North Youth Foundation (TNYF) is the charitable entity of True North Sports + Entertainment and of the Winnipeg Jets Hockey Club. TNYF is relentless in pursuing its vision of empowering potential in youth by administering meaningful programs that enrich physical, social, mental and emotion aspects of a child’s life. The core programs of the TNYF include the Winnipeg Jets Hockey Academy, Camp Manitou, and Project 11 – a mental wellness program for students in Grades K-8.

To learn more about the WJHA and the TNYF, please visit: tnyf.ca or watch this video: