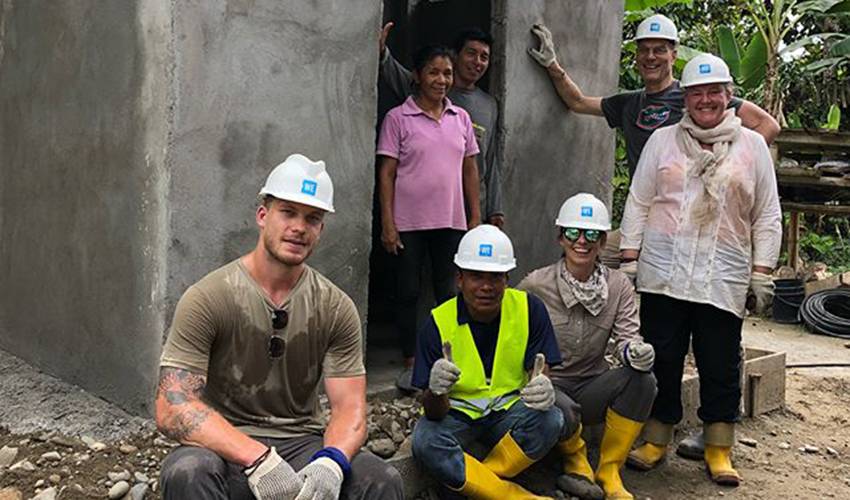 During the summer months at their family home in the east end of Toronto, Alison Oleksiak will, on occasion, ask her son for a helping hand with various gardening tasks.

Typically, such requests are greeted with a less-than-enthusiastic response from her hockey-playing son.

“I am not good at all when it comes to that kind of work,” offered Jamie, now in his second season with the Pittsburgh Penguins after 140 games with Dallas. “My mom, she always has me working in the garden and I try and get away with doing as little as possible.”

The Pittsburgh Penguins defenceman couldn’t resort to such tactics in Ecuador as part of a charitable mission headed by ME to WE, a social initiative that brings humanitarian work to parts of the world in need of assistance.

It was his sister, Canadian swimming superstar Penny Oleksiak, along with his parents, who first planted the idea of Jamie getting involved with ME to WE.

“Penny, she’s a spokesperson with ME to WE, so our family began our tie with it that way,” recalled Jamie, selected 14th overall by the Stars in 2011. “Last year, they went to Kenya. They couldn’t stop talking about it and highly recommended that I try it this year. I didn’t know that much about ME to WE, and I thought, ‘They couldn’t be doing this much to make such big changes, could they?’”

He got his answer almost from the moment he arrived in Ecuador. The 25-year-old soon realized it was going to be far more demanding than cutting grass or pulling weeds with his mother.

Throughout his time in the South American country, the 6’7”, 255-pound blueliner shoveled rocks, dug holes and pushed wheelbarrows countless times as part of a team that was tasked with building bathrooms.

“When I was there – you don’t see big people and I’m obviously huge compared to them – it was a lot of head turning,” he said. “When I was working on the bathrooms, there was an older lady and she was shoveling rocks. I’m trying to keep up with her and I’m drenched in sweat. She’s just going along doing the work. I figured I had to keep up with her, just for pride.”

He managed to hold his own.

“All the villages are about 500 metres in-land because the river can flood,” he noted. “You work in the morning. The bathrooms, it’s a real necessity for the people there. In the afternoon, there’s a little event where you do something that’s not as strenuous. We’d go on tours and see the traditions people have there. It was a busy time there. You didn’t have much time to lie down, but it didn’t matter because you learned a lot. And you are giving these communities something they need, something that will go a long way in making a big difference.”

Eye-opening is a term Jamie often uses when describing the experience.

“You learn so much in such a little amount of time,” he recalled. “The people showed us how they work together with local farmers. They teach them how to harvest the cocoa and how to make chocolate and coffee beans, so that they can bring money into the communities. I’m just really glad I went. I definitely feel very fortunate that I got to go. It was a lot of fun.”

Come next summer, will he have a different reaction when he’s asked to put on gardening gloves and give his mom a helping hand?