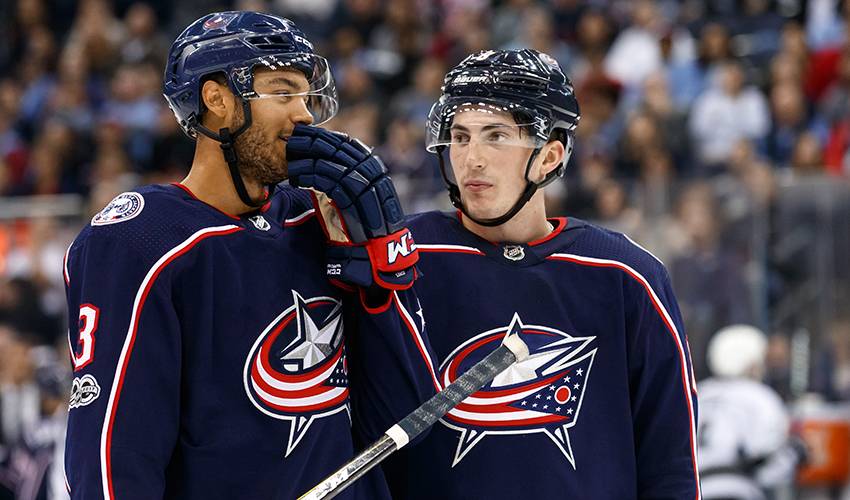 What’s the best thing about playing alongside Seth Jones? For a fellow defenceman, it’s in knowing you don’t have to face off against him.

He logs serious minutes, leading the League in both total ice time per game (26:21) and 30.5 shifts per game. He block shots, delivers huge hits, produces points and can be the difference maker when the game is on the line.

It all adds up to the strapping 6-foot-4, 208-pound Jones being one of the game’s most well rounded blueliners, a player who combines solid offence with stout defence.

“Seth works hard every day and brings his game no matter what,” praised Zach Werenski, another top-tier defensive talent on the Blue Jackets. “Even if the team isn’t playing great, Seth always plays his best and that just shows how well he prepares.”

Growing up in a basketball family – his father, Popeye Jones, played 535 games in the NBA – Jones, the Canadian Major Junior Top Prospect of the Year in 2013, has seen his responsibilities and ice time minutes increase significantly over the past three seasons.

This season, it’s significantly higher for the player who was acquired by Columbus in a trade with the Nashville Predators on January 6, 2016. In a 3-2 overtime loss to Anaheim on November 4, Jones, who notched a pair of assists, was on the ice for 30:14.

The Texas-born Jones, who scored his first NHL goal nine days after turning 19, was selected to participate in the NHL All-Star Game in 2017, but wasn’t able to play in the annual event de to an illness. Werenski took his spot.

In 2018, Jones, who finished fourth in voting for the James Norris Memorial Trophy as the League’s top defenceman, was also named to the NHL Second All-Star Team.

This year, in 19 games, the blueliner has three goals and nine assists, along with a plus-4 rating. He’s also on a three-game point streak, including a goal in a 7-5 Columbus triumph over Detroit on November 26.

None of it comes as a surprise, said Werenski.

What doesn’t go unnoticed, however, is Jones’ popularity amongst his teammates.

For Werenski, having No. 3 on the same side is a huge win, both on and off the ice.

“He’s such a good person and so easy to get along with. Everyone loves being around him and he always gets the best out of everyone.”