There was a point in time when Jake McCabe would find himself on the receiving end of mini stick hockey’s version of a game misconduct. 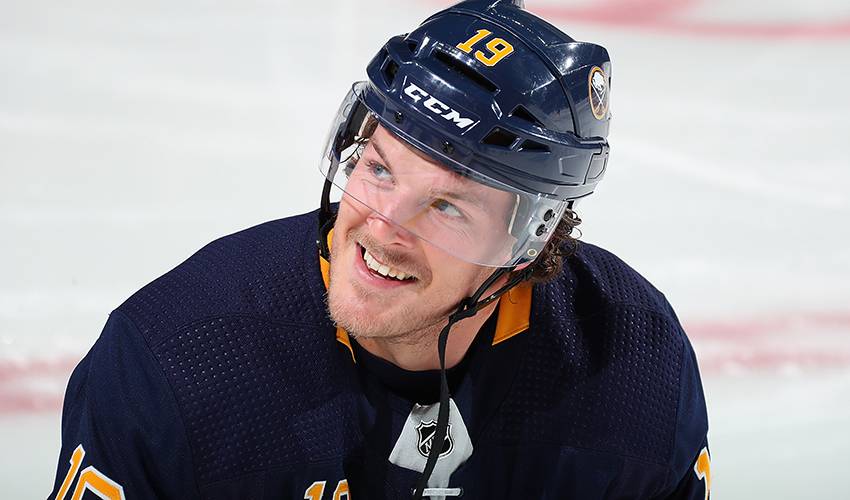 There was a point in time when Jake McCabe would find himself on the receiving end of mini stick hockey’s version of a game misconduct.

Minor hockey tournament road trips were a norm for the McCabe family, taking them both near and far from their Wisconsin home in Eau Claire.

On the occasions that required staying over in the host city or town, Jake couldn’t wait for the puck to drop on the tournaments.

Thankfully for the young defenceman, he didn’t have to look very far to satiate his hockey cravings. In fact, all he had to was step outside a door.

“Mini stick hockey in the hotels all the time,” McCabe said with a laugh. “We were always getting kicked out and yelled at because we were playing in the hallways. Every once in a while, the hotel staff would be nice enough to give us a whole conference room to play in, but we had plenty of those games growing up.”

Hockey wasn’t the only sport McCabe excelled at. And although he wasn’t on the road to Green Bay Packers quarterback Aaron Rodgers-type greatness, he did have some success on the gridiron as a teenager.

“As soon as I could walk, I was on skates,” he recalled. “But I played all sports growing up. I was a three-sport athlete in high school until I moved away from home to Ann Arbor (Michigan, to play with the USA Hockey National Team Development Program). I played everything under the sun, so I kept my parents running from one place to the next.

“I played quarterback in football, but hockey was my true passion. There were quite a few good memories from playing football, especially getting the chance to play in the fall weather in Wisconsin – having the chance to be out there with your buddies. If hockey hadn’t worked out, I would have pursued football a little harder.”

When he wasn’t honing his athletic talents, McCabe and his siblings would sometimes help out their father at his construction business.

Hard work wasn’t the only lesson he learned.

“If my dad (David) ever needed someone on short notice, he’d ask us kids to help out,” McCabe recalled. “We’d be on the walkie-talkies – the stop and slow people. I did that a couple of times. I did some landscaping, too. Those were the main gigs. I learned from an early age not to complain about construction. My dad quickly pointed out that the nice hockey skates and hockey sticks were only possible because of construction.”

After a successful time with the USA Hockey National Team Development Program, McCabe played three seasons (2011-14) at the University of Wisconsin, drafted 44th overall in 2012 by the Buffalo Sabres.

Currently skating in his fourth full NHL campaign, and less than 20 games shy of 250 for his career, McCabe has fond recollections of his days growing up in The Badger State.

“My brother (Andrew, who played at the University of Wisconsin-Eau Claire) was always my role model growing up,” he said. “Player-wise, I was a big Mike Modano fan. My parents were big Minnesota North Stars fans. That probably had a lot to do with it. American-born, flying up and down the wing – he was fun to watch. There’s just a lot of good memories growing up in Wisconsin and the support I’ve always had from my family.”

And what about those mini stick hockey ejections?

“Well, we always found a way to keep playing.”