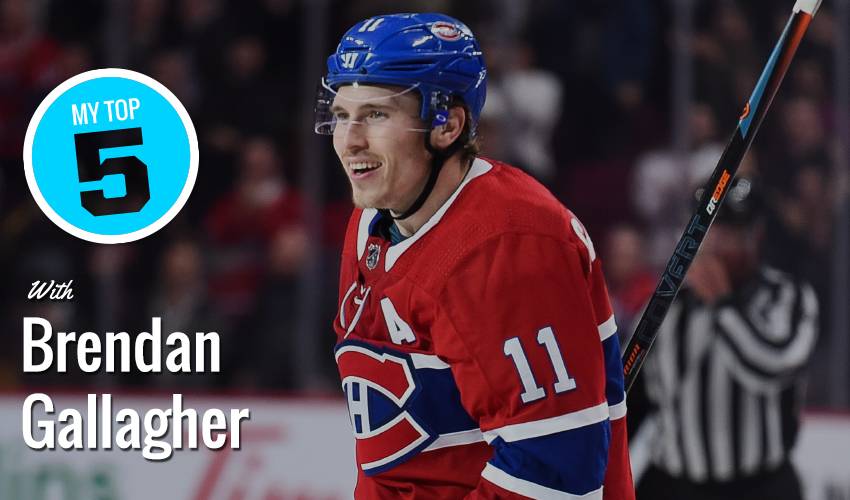 Gallagher, an alternate captain for the Montreal Canadiens, has some notable names on his list, including an NFL quarterback legend, a golfing great and a soccer standout.

“When it comes to hockey, it was always Martin St. Louis for me. I just loved the way he competed. We played against him in a playoff series once and you could pretty much see what I’m talking about – he scored some pretty big goals against us. He’s tough to shut down.”

“I’ve always been a big fan of Tiger Woods, for the same reason that I’m a fan of Martin St. Louis. I really appreciate the compete level they both have. As for the best part of my game, it depends. I’m supposed to be pretty good at chipping from just off the green. Some days, it’s not very good, but it’s usually where I save some strokes. Going head-to-head against Tiger? No… unless I got some serious advantages. But it would be fun.”

“For football, I really enjoy watching Tom Brady perform. He always finds a way to rise to the occasion and his numbers speak for themselves. He’s just a winner. If he threw me a pass, I might be able to catch it. He’d probably make it impossible for me to drop.”

“I loved watching Roy Halladay pitch for the Toronto Blue Jays. He was the ultimate competitor and just had such great stuff when he was on the mound. His preparation and commitment to the game was outstanding.”

“(Laughing) I could say Harry Kane (Tottenham Hotspur), just to bug Artturi Lehkonen (a big Arsenal supporter) who is sitting right beside me now. Kane’s probably the third-best scorer in soccer behind Ronaldo and Messi.”