He’s enjoying a starring role between the pipes with the Buffalo Sabres in 2018-19, the 32-year-old’s first campaign tending the twine with the Eastern Conference club. 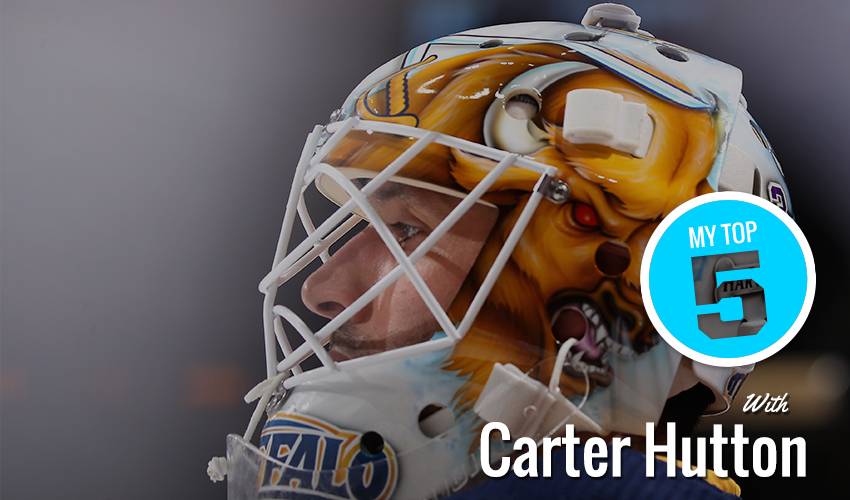 He’s enjoying a starring role between the pipes with the Buffalo Sabres in 2018-19, the 32-year-old’s first campaign tending the twine with the Eastern Conference club.

When he’s not flashing his glove hand or making a big-time stop with the game on the line, Carter Hutton likes to unwind by tuning in to his favourite television shows.

As for which one tops his list, here’s a hint: Hutton doesn’t mind going medieval.

“No. 1 has definitely got to be Game of Thrones. Best show ever probably sums it up. My wife and I watch that together. We’re sitting here waiting for the next season. They really keep you hanging.”

“For my second favourite, I’ll go with Westworld. It’s twisted and it makes you think. With the way technology is going, you wonder if we’ll ever get to that stage.”

“I really love watching The Sopranos. It’s just phenomenal. I had to go on a diet after watching it because they eat so much food in it. It’s an all-time classic.”

“Another great show I enjoy sitting down to watch is The Wire. It’s an unbelievable show that intertwines all the different elements of a city – the police, drug dealers, media. It’s just such an in-depth, interesting show. It’s a cool look at a whole city.”

“I’ll go with Breaking Bad. Again, it just had me hooked from the very first episode. Brian Cranston (who plays lead character Walter White) is just amazing in it. All of the acting is excellent and the show is just so well done.”