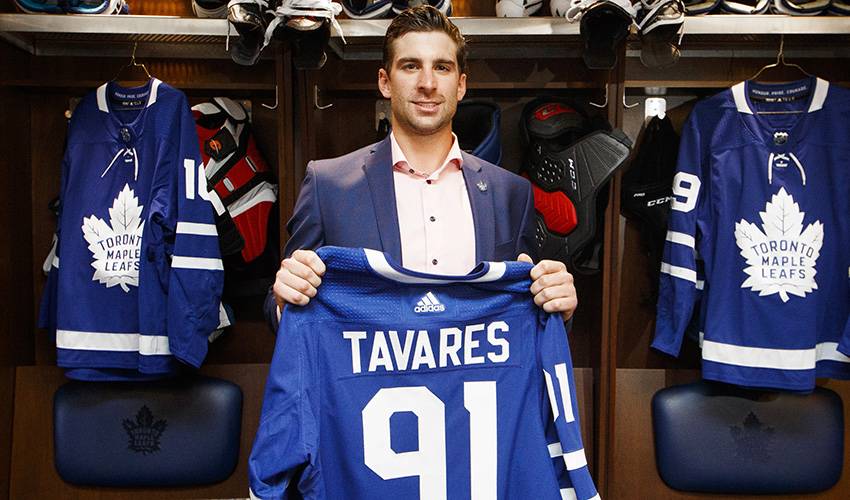 It was an Ontario Hockey League trade that had the entire hockey world talking. Nine and a half years ago, the Oshawa Generals sent Tavares, Michel Del Zotto and Darryl Borden to London, in exchange for Scott Valentine, Christian Thomas, Michael Zador and six draft picks.

In Tavares, the Knights got a bona fide scoring ace, the centre that had recorded a jaw-dropping 72 goals in 67 games for Oshawa in 2006-07.

But it wasn’t just the big numbers that impressed Mark Hunter, owner, GM and vice president with London, when he first met Tavares.

“John, he is very serious and very businesslike,” Hunter told NHLPA.com. “He would come in early, do his stretches – I can see why he’s improved his game, year in and year out to make himself a better hockey player. He’s a very dedicated young man.”

The New York Islanders made the native of Mississauga, Ontario the first overall pick in the 2009 NHL Entry Draft.

“He made a huge impact in London in many ways, including his leadership,” noted Hunter. “He wasn’t overly talkative. His dedication to the game, his love for the game, working on his game after practice, getting there early to make sure he’s prepared for practice, and of course, he’s always there ready to play. Those are the things that come to mind. He scored over a goal a game for us. He was very astute on what he had to do to be a better hockey player.”

Whether Tavares had a multi-point game or a tough night on the scoresheet, Hunter recalled a player that never looked back on his last game.

Instead, the young forward preferred to look forward to the next challenge.

And even though teams did their best to throw Tavares off his game, the numbers show it didn’t work.

“I wasn’t surprised that he was able to deal with that,” said Hunter. “I’m not surprised at how well he’s done in the National Hockey League. With all the accolades he’s had over the years and when he was younger in bantam and minor hockey, you might think he wouldn’t be that person who constantly tries to find ways to make his game better, but he sure did and he sure has.”

Now, after another major career move, one that saw Tavares sign a seven-year, $77 million contract as an unrestricted free agent with his hometown Toronto Maple Leafs on July 1, the former Islanders captain will look to create a similar impact the way he did with the Knights nearly 10 years ago.

“I knew his stick was really good (when he first came to London), but it was even better than I thought it was,” praised Hunter. “Around the net, tipping pucks, getting pucks up very quickly to score… it’s another level of being exceptional. That’s what he has.”