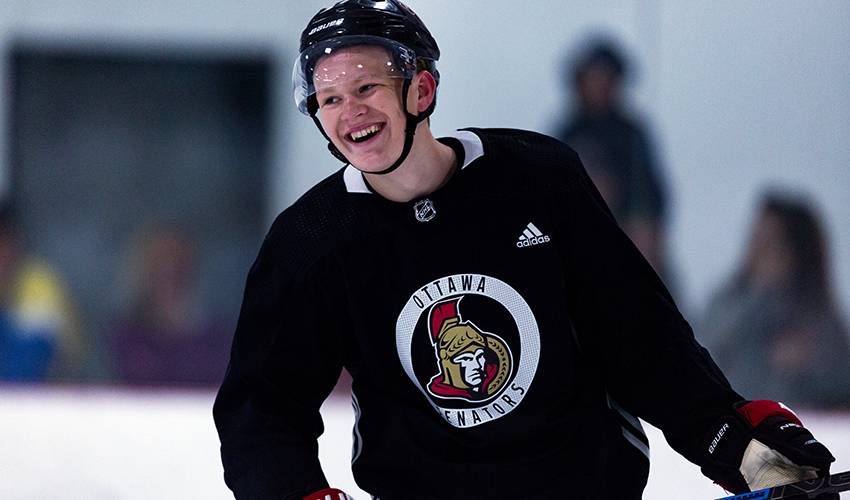 However, the 18-year-old decided that he was ready to take the next step in his career signing his entry-level contract with the Senators and pursue his dream of playing in the NHL.

“It was a really hard decision, there was a lot of thought that went into it and for me it was really hard to leave BU,” said Tkachuk, speaking from the 2018 NHLPA Rookie Showcase, on the decision to leave college for professional hockey. “I loved every second of it there with all the people, from the hockey side to the school side, but at the end of the day I’m living my dream right now and there’s a good opportunity in Ottawa.”

Fortunately for him he has a good support group to lean on in his father, Keith Tkachuk, who played 20 seasons in the NHL, and brother, Matthew Tkachuk, who currently plays with the Calgary Flames.

However, neither one would tell him where he should go. Instead, they made it clear that he needed to make this decision based on what he thought was the right fit for himself.

“They told me to do what I thought was best for me,” Tkachuk said. “I wished they could’ve helped me pick one of the other, but they told me to just pick where I wanted to be. It was great to have them say that they would support me no matter what decision I made.”

With his focus on making the Senators out of training camp, Tkachuk knew that he needed to take the next step in his training and preparation this summer to prepare for the tough grind of the NHL schedule.

“Matthew and I moved up to Aurora to work with Gary Roberts,” Tkachuk said. “That meant leaving home and all my friends and family to really focus on my skillset and build up my strength in the gym which was my focus.”

Many NHL players have gone to Roberts, the former NHL player with 1,224 NHL games and a Stanley Cup to his name. Since his retirement, the likes of Connor McDavid and Mark Scheifele have sought out his high-performance training platform for help in their offseason training, and a main reason why is because of his balanced approach to nutrition and exercise – something Tkachuk feels he has benefitted from.

“I feel like I made a lot of gains with my eating coming a long way on the nutrition side with Gary,” Tkachuk said. “I've had great training experience in the past but for me it was the nutrition side that really stood out to me with Gary. With how they have all the meals there and cook them on the spot, I felt like I learned a lot about nutrition that I can use moving forward.”

Senators players like Matt Duchene, Mark Stone and Mark Borowiecki have already started to reach out to Tkachuk, which he appreciated, and he is excited to move up to Ottawa and meet them for the first time while hoping to help turn things around in Ottawa.

He’s also talked with head coach Guy Boucher and knows that the Senators want to incorporate more younger players in the lineup but Tkachuk knows it won’t be easy.

“I’m just going to work my hardest, play my game and don’t take a backseat since it’s my first time with the whole group,” Tkachuk said. “At the end of the day I want to be in the NHL this year.”