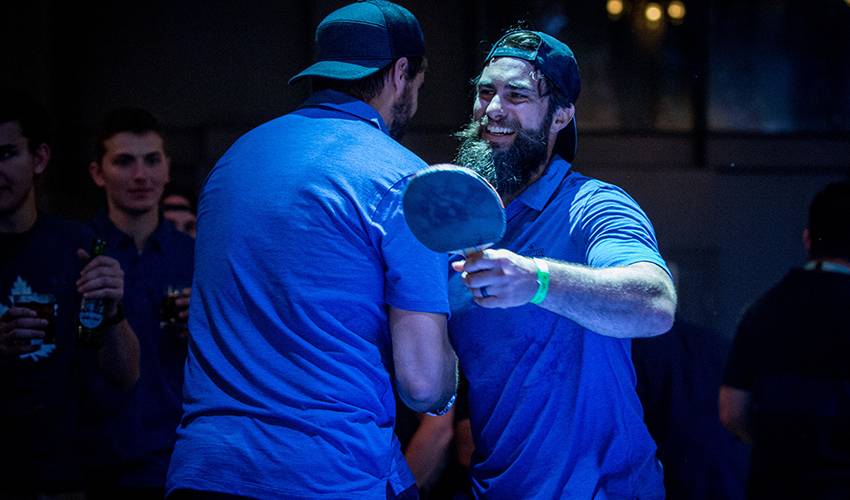 Patrick Eaves, who was limited to just two NHL games in 2017-18, can’t wait for the puck to drop on the new season.

But before it does, the right wing has one order of business to take care of.

The voice that greets you on the other end of the line is a happy one. For starters, it’s Eaves’ oldest kid’s birthday. But there’s another reason, a big one, as to why the 34-year-old is smiling these days.

“It was very trying year,” said the Anaheim Ducks forward who was forced to the sidelines after initially being diagnosed with Guillain-Barre syndrome, a condition where a person's immune system attacks the nervous system. Doctors later concluded that Eaves was experiencing post-viral syndrome, which can be triggered by a viral infection.

“I had to have surgery [on his shoulder] in March, which ended it all. I’m doing therapy for that, but the rest of my body feels great. I’m training hard. It’s pretty much what I did the past couple of years. I just got off the ice and I feel great. I’m excited to feel normal again.”

Eaves, who came to the Ducks via a trade from Dallas February 24, 2017, turned to several people for support since his diagnosis last October.

“The only reason I’m able to come back and play this year is because of the people that I’m surrounded by,” said the veteran of 626 regular season NHL games. “It starts with my wife, my kids, my family, the trainers and everyone that has helped me.

“It was a very difficult situation. It humbled me, for sure. It made me lean on everyone around me. You can be surrounded by great people, but sometimes it’s a pride thing…you don’t always want to share your difficulties. This forced my hand on that and everyone came to the table and helped out. I’m very fortunate. I’m really looking forward to playing again.”

Before that happens, Eaves will attempt to net his fourth straight Smashfest title.

“It’s just such a fun night to be part of,” said Eaves. “You go meet guys that you’ve played against all year in a fun setting. But I’ll be ready to play. I’m very excited about playing in it.”

Moore won’t make it easy for Eaves in his quest for a four-peat.

“Dom is loading up the deck,” said Eaves. “Every year, he seems to do that. It’ll be good. You have to get a little lucky and just have fun.”

Don’t expect the 29th overall pick of the Ottawa Senators in 2003 to hit the table tennis circuit any time soon.

“Not yet,” offered Eaves. “I’m looking to get on the senior tour one day.”

How would a Smashfest title, a return to NHL hockey, followed by a Stanley Cup win sound?

“Well, that sounds great. I’d definitely be happy with that.”