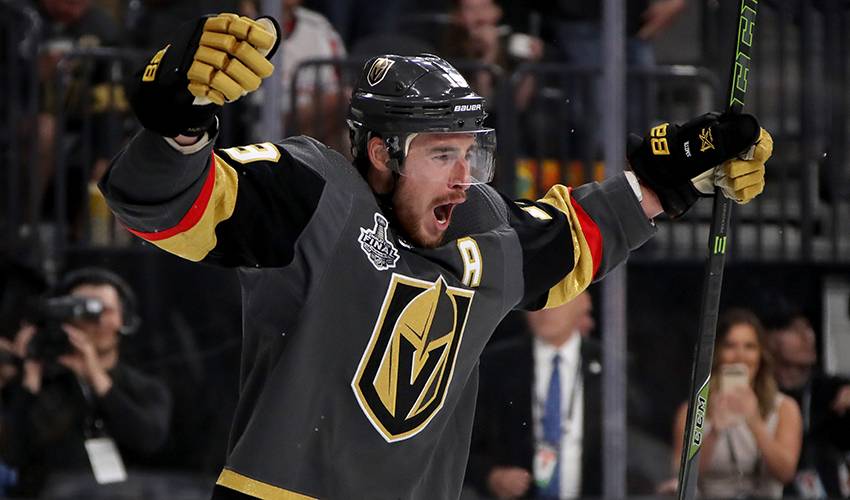 “When he scores and you see that smile, that’s what I remember about Reilly Smith,” started Blasi, the longtime head coach of the RedHawks men’s hockey team. “He just loves to be a hockey player and he loves life. You can still see that now when he’s playing for the Golden Knights. He truly loves life and the game.”

Blasi discovered that before Smith slipped on a Miami sweater and played three seasons for the NCAA Division 1 team.

The school had recruited the forward’s older brother, Brendan, a defenceman, who went on to play his collegiate hockey with Wisconsin. He’s skated in 353 NHL regular season games with the Detroit Red Wings and New York Rangers.

“It’s a really great family,” said Blasi. “I remember watching Reilly play. He just really had high-end skill. He could score goals, make plays – he was just one of those guys that stood out for you.

“When the time came to recruit him, we felt we needed to go pretty hard after him. Knowing the family from a previous recruiting, we had a really good connection, so all the boxes checked in terms of character, type of person, family background and the player that he was. For us, it was a really fortunate recruit because he was one of those guys that makes you better right away.”

And Smith, a third-round selection of Dallas in 2009, drafted 69th overall, did that and more.

In 2011-12, as team captain, he was one of 10 finalists for the Hobey Baker Award, a campaign in which he scored 30 goals. His 48 points ranked ninth in the country, he was voted unanimously to the 2012 All-CCHA First-Team and also landed on the 2012 CCHA All-Tournament Team, his second straight year on both.

Smith finished his career at Miami totaling 122 points in 121 games.

“I think in those days he was captain because of his abilities and the way he led by example,” offered Blasi. “Reilly never took a day off. What you see right now is what we saw every day in practice and in games. He loves to play the game and he loves to compete. He’s a really smart hockey player. His hockey sense is off the chart. It makes him a really dangerous player.”

But a happy one, no matter what he happens to be doing.

“Reilly always smiles,” said Blasi. “He’s very positive and nothing really ever bothers him. He loves to play the game. I don’t know if I ever remember him being upset when he was on the ice, whether it was skating drills or whatever the practice was that day. He just loves to be a hockey player and he loves life. He truly loves life. He’s one of those guys that gets along with everybody and he brings that with him on the ice.”

It’s carried over to an NHL career that has included stops in Dallas, Boston, Florida and now as a member of the Golden Knights.

In game one of the Cup Final, Smith had a goal and an assist in a 6-4 win on home ice. He had an assist in a 3-2 loss in game two on Wednesday night. In 17 playoff games, the Ontario native has three goals and 19 points.

“Good things happen to good people,” said Blasi. “That’s a phrase that’s used quite often in our locker room. And I truly believe that. We’re very proud of Reilly and seeing him have all the success.”

Blasi had a chance to tell him that just before the 2017-18 NHL season got underway.

“We had a good chat,” he recalled. “We have a pro week here in August for the NHL guys and AHL guys before they head to their respective camps. I remember skating around with him and he had his new Vegas gloves. He said, ‘Hey coach, what do you think of these white things?’

“I get a kick out of any of our players that play in the NHL. Obviously, when they are playing for the ultimate prize in our sport, are doing well and contributing like Reilly is, it brings a smile to my face. I’m honoured that I had a little part in his life. I know his teammates feel the same way and I know our program feels the same way. We’re behind him 100 per cent.”

Smith's on-ice prowess this postseason also caught the eye of Brad and Lauren Sugars. The couple, survivors of the mass shooting at Route 91 Harvest festival, recently decided on naming the youngest of their five children after Smith on the heels of his game-winning goal in Game 4 of the Eastern Conference Final against the Winnipeg Jets.

According to NHL.com, the couple's son Coby brought up the movie "Inside Out", which features a hockey-loving girl named Riley.

"It sort of made it perfect, this hockey playing kid in this movie that's as cute as [can be]," Brad told Nick Cotsonika. "Reilly scores the goal the night before, and we're all sitting in the hospital room and just go, 'Name is chosen.'"