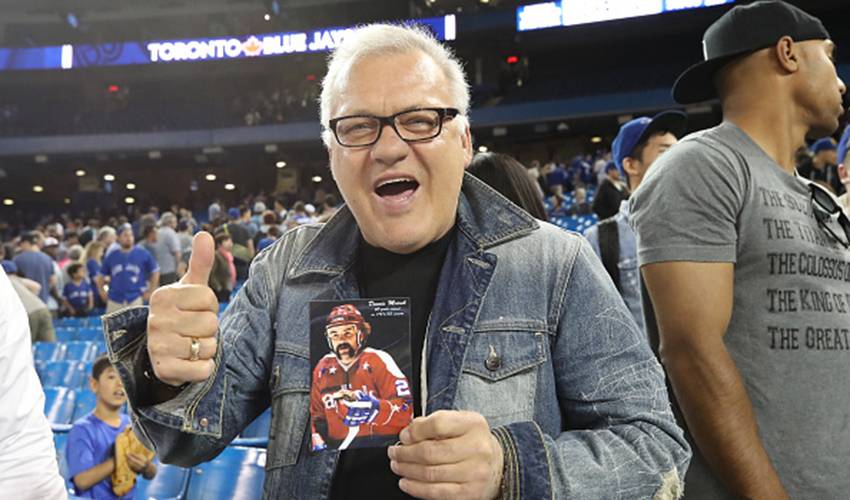 His most memorable season in an NHL career that spanned 888 games came in 1981-82 when he patrolled left wing for Washington. In 80 games, Maruk produced 60 goals, 76 assists and 136 points.

Two of those marks still stand to this day, but one has been relegated to second spot all-time after Alex Ovechkin notched 65 tallies in 2007-08.

But the now 62-year-old, who is one of only 20 players in NHL history to score 60 or more goals in a single season, doesn’t hold any ill will towards one of the most prolific offensive superstars in NHL history.

In fact, whenever they meet up, Ovechkin is quick to remind the man who scored 356 career goals of two things in particular.

“I’ve come down to Washington over the years and I’ll see the guys,” said Maruk, drafted 21st overall by the California Golden Seals in 1975. “When I see Ovi, he tells me, ‘Listen, I beat your goal scoring record, but I’m not going to beat your total points record. That’s yours and you’ve got it locked down.’ Records are always made to be broken. But who knows? Maybe it won’t happen in my time, but it could after.”

What Maruk would like to see happen in his time is for the Capitals to hoist the Cup.

The only thing left standing in their way is the Vegas Golden Knights, a team once pegged at 500-1 to win it all. Vegas took game one 6-4 on Monday night.

Maruk, who co-wrote a book with Ken Reid entitled, Dennis Maruk: The Unforgettable Story of Hockey’s Forgotten 60-Goal Man, likes what he sees from his former team.

“I’ve been really impressed by the second and third efforts by a lot of the players” he offered. “[T.J.] Oshie, it’s phenomenal the way he plays. If he can continue that, they’re going to win the Cup. But all of the players – [Nicklas] Backstrom coming back and making plays – are playing so hard and so well. Ovi is playing the way he always does – very electrifying. [Braden] Holtby, I’ve always said he’s going to be the key for them to move on. The defence has played really strong, too. But you’ve got to score goals and they’re getting them from guys that they might not have expected.”

Would Maruk, who also played with the Cleveland Barons and Minnesota North Stars during his NHL days, have fit in on this year’s edition of the Capitals?

“I’d have to be in a little better shape, plus a little faster and a little stronger,” he said. “The game is wide open, it’s fast, it’s intense and it’s young. It’s hard to say. But because of my skills and the way it’s wide open, there are more scoring opportunities – I think I’d be able to compete.”

As for whom he’d compare himself to on the roster, Maruk, who played his last season with the Capitals in 1982-83 and helped the team to their first playoff appearance, opted for two players.

“I like (Evgeny) Kuznetsov,” he said. “I love the way he plays and the way he handles the puck. He’s a good playmaker. And maybe a little bit of Backstrom, too. I think he and I have some traits in common. I scored more goals than he did, but I also wasn’t a bad playmaker.”

And as for No. 8, the three-time Ted Lindsay Award recipient who has 607 regular season NHL goals, Maruk has more kind words for Ovechkin.

“I get excited about watching a lot of hockey, but even more so in the playoffs. And when you’ve got a guy that can light the lamp at will in Mr. Ovechkin, I think that’s pretty cool. I had a quick shot, but not one like Mr. Ovechkin. Being in that 60-goal club…it’s not too bad.”