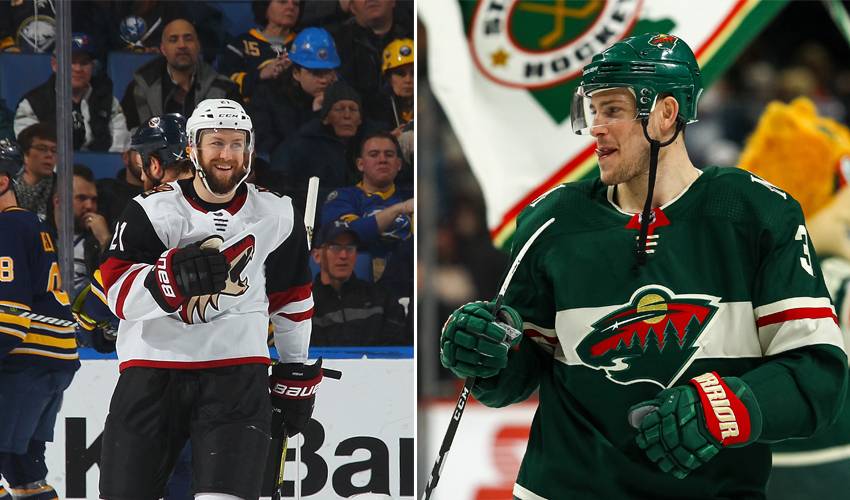 National Teacher Day, which took place on May 8, is part of Teacher Appreciation Week, which occurs on the first full week in May of each year. The National Education Association touts National Teacher Day “as a day for honouring teachers and recognizing the lasting contributions they make to our lives.”

Coyle, a veteran of 419 NHL regular season games, and Stepan, who has skated in 597 big-league contests, haven’t forgotten the teachers that played an important role in helping them learn invaluable lessons inside and outside of the classroom.

“I was blessed with some really great teachers,” said Stepan, who attended Shattuck-St. Mary’s high school in his native Minnesota. “There were so many excellent ones. I was kind of an Eddie Haskell (a character on the sitcom Leave it to Beaver), a bit of a suck-up, so I got along with a lot of my teachers.

“When I was at Shattuck, there was a Spanish teacher – I called her Senora Mendoza – who was just great. But I was pretty lucky to have so many helpful and caring teachers throughout school.”

It’s a sentiment echoed by Massachusetts native Coyle, who attended his hometown Weymouth High School, as well as Thayer Academy, a college-preparatory school, also in his home state.

“When I went to prep school, it was a little more challenging,” recalled the forward, who was drafted 28th overall by the San Jose Sharks in 2010 before being traded to Minnesota on June 25, 2011. “The teacher to student ratio was smaller, which was good because it gave me the confidence to talk to my teachers more or approach them if I needed extra help.

“I had a lot of teachers that helped me along the way. They really care. They wanted to see you succeed. When you have a teacher that cares, I feel you want to work harder for yourself and for them. When you have people in your corner, it always makes you feel better. When you have teachers who are great people, it rubs off on you and makes you want to be the same way.”

For Coyle, advice he received and life skills he learned throughout school years have stuck with him to this day.

“There were a lot of things you learned from your teachers and school that are relatable to hockey – preparation, commitment, dedication,” said the 26-year-old. “You understand what goes into being successful and how it applied to your schooling and these days, how it applies to hockey. ”

He has but one small regret.

“I had a cooking class in my freshman year at Weymouth that I really enjoyed,” said Coyle, who had 48 points in 26 games with Thayer’s hockey team in 2008-09.  “I wish I had have taken more of those because I’d cook more these days.”

Stepan, selected 51st overall by the New York Rangers in 2008, looks back fondly on his days at Shattuck-St. Mary’s.

“When I was living away from home, I didn’t have my parents around,” recalled the 27-year-old, who was traded to the Coyotes on June 23, 2017. “I’d call them every night, but for the most part I was taking care of myself. Those teachers were a big influence on me. I think that’s a big thing about Shattuck. They have good people surrounding you and it makes for a really great environment. I was blessed to get pushed in the right direction by a lot of great teachers.

“When I was at Shattuck, there was no guarantee of making it to the NHL, so you had to make sure you took care of your education. That was the biggest message that I remember, to take school seriously and work hard at it.”

As Stepan and Coyle both know, it’s an approach that can lead to great things.