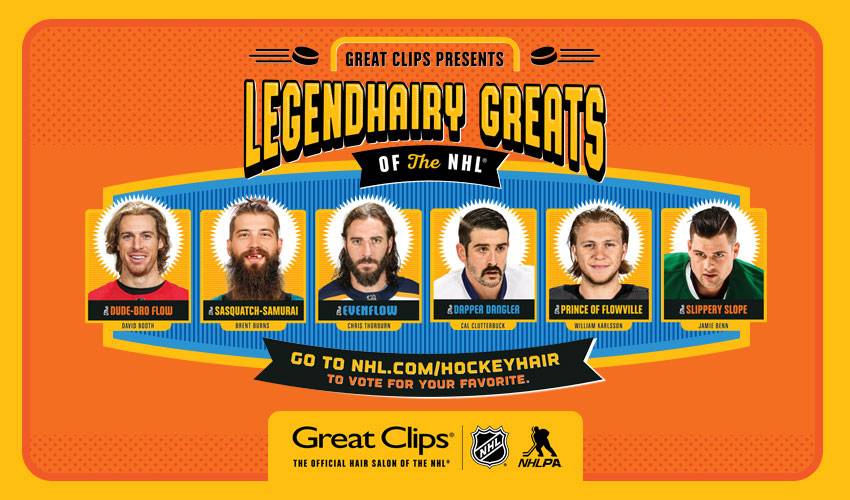 MINNEAPOLIS (MAY 2, 2018) – Great Clips, Inc. is proud to be named the Official Hair Salon of the NHL® as part of a partnership with the National Hockey League Players’ Association (NHLPA) and the National Hockey League (NHL) for the 2018 Stanley Cup® Playoffs. The partnership centers around a campaign, aptly named the Legend-Hairy Greats of the NHL. The socially-shareable campaign features an online poll where fans can vote for their favorite “hockey hair” styles from some of the sport’s most notable players including: Brent Burns of the San Jose Sharks, Cal Clutterbuck of the New York Islanders, Jamie Benn of the Dallas Stars, James Neal of the Vegas Golden Knights, Chris Thorburn of the St. Louis Blues, and many more.

The “Legend-Hairy Greats of the NHL” campaign will run through the duration of the Stanley Cup® Playoffs through the Stanley Cup® Final in June. “Head-to-Head Matchups” between players as well as individual players’ hairstyle evolutions will be displayed in campaign materials so fans can vote on their favorite hairstyles. Participants of the campaign are encouraged to use #HockeyHair to share their voting results and to encourage others to submit their own votes at NHL.com. Great Clips salons across the United States and Canada will support the campaign and encourage their current customer base to participate through in-salon signage as well as messaging through its Great Clips Online Check-in App, redirecting mobile users to the voting URL. The “Legend-Hairy Greats of the NHL” also will be promoted during live Stanley Cup Playoffs broadcasts, in person at venues hosting the Stanley Cup® Playoffs, and on the NHL’s social media channels.

In addition, Great Clips will soon announce a lineup of Great Clips ambassadors who will help spread the word of the “Legend-Hairy Greats of the NHL” campaign.

“When most think of hockey, they think of ‘hockey hair,’ making the NHL partnership the perfect place for Great Clips to connect with its target consumers,” says Great Clips, Inc. CEO Steve Hockett. “We wanted to join forces with the NHL to not only highlight some of the best players in the league, but to also have some fun with those legendary hairstyles that the fans have come to know and love. We look forward to the results of our online poll during the most exciting few weeks of the sport.”

"The Stanley Cup Playoffs is the most thrilling and competitive postseason in sports,” said Keith Wachtel, NHL Chief Revenue Officer and Executive Vice President. “Great Clips has conceived a creative, entertaining and inviting concept for the Stanley Cup Playoffs that has increased engagement among our avid fans across multiple platforms while connecting with a broader audience through its tremendous retail footprint of more than 4,200 stores across North America.”

“We are excited about this partnership with Great Clips and the chance to help fans connect with their favourite players during the 2018 Stanley Cup Playoffs,” said Sandra Monteiro, NHLPA Chief of Global Business Strategies. “The players are the face and focus of the NHL and the ability to activate players directly in the “Legend-Hairy Greats of the NHL” is a great opportunity to continue to profile the players’ unique style and personalities.”

Great Clips, Inc. was established in 1982 in Minneapolis. Today, Great Clips has 4,200 salons throughout the United States and Canada, making it the world’s largest salon brand. Great Clips is 100 percent franchised, and salons are owned locally by more than 1,200 franchisees across North America. Great Clips franchisees employ nearly 40,000 stylists who receive ongoing training to learn the Great Clips customer care system and advanced technical skills. As a walk-in salon, Great Clips provides value-priced, high-quality haircare for men, women and children. No appointments are needed, and salons are open nights and weekends. Getting a great haircut is more convenient than ever with Great Clips’ Online Check-In and Clip Notes®. To check-in online, visit GreatClips.com or download the app for Android and iPhone. For more information about Great Clips, Inc. or to find a location near you, visit GreatClips.com.

The National Hockey League (NHL®), founded in 1917, consists of 31 Member Clubs, each reflecting the League’s international makeup with players from more than 20 countries represented on team rosters, vying for the most cherished and historic trophy in professional sports – the Stanley Cup®. Every year, the NHL entertains more than 250 million fans in-arena and through its partners on national television and radio and more than 151 million followers - league, team and player accounts combined - across Facebook, Twitter, Instagram, Snapchat and YouTube. The NHL reaches fans worldwide with games available online in every country including via its live and on-demand streaming service NHL.TV™. For more information, visit NHL.com.