Playing in his third full NHL season, the 26-year-old left wing and proud native of Ann Arbor, Michigan offered up his top ‘Favourite Athletes Of All Time’. 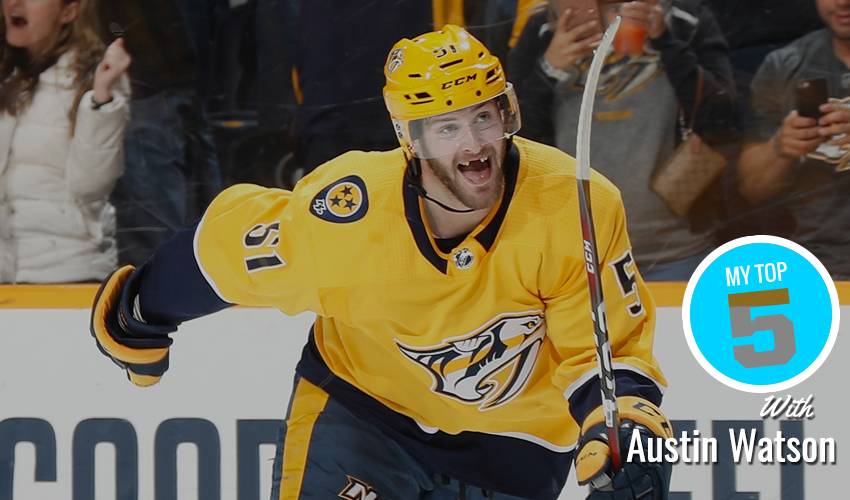 When he wasn’t busy building on his career-high NHL goals count or netting a short-handed tally (he has three this season), Austin Watson took a few minutes to stop by NHLPA.com.

Playing in his third full NHL season, the 26-year-old left wing and proud Ann Arbor, Michigan native offered up his top favourite athletes of all time.

Who made Watson’s list? You’ll find two hockey players, one golfer, one quarterback, one basketball player – and plenty of Detroit content.

“I grew up watching the Red Wings when they were winning Stanley Cups. He was such a great player and was the leader of that team. He was somebody who was fun to watch and someone who played the right way all the time. He was definitely an exciting player for me to watch when I was growing up.”

“He played at the University of Michigan, so being a fan of that football team when I was younger and seeing his rise to be one of the best quarterbacks, if not the best quarterback ever, is just amazing. He’s so much fun to watch. Every year, he seems to get better. It’s exciting to watch him compete for Super Bowls all the time.”

“I’m a big fan of Tiger and really excited that he’s playing well now after a little bit of time off. I had a lot of fun watching him in his prime when he was winning tons and tons of golf tournaments and in contention literally every week. He’s obviously one of the best golfers, if not the best golfer to have ever played the game. He was exciting for me to watch as a kid and he’s exciting for me to watch now in his comeback. I would absolutely not be able to give him a run for his money on the golf course, but that would be a treat.”

“Another player I really liked to watch back in the day when he was with Detroit. Just like with Steve Yzerman, I watched a lot of Red Wings games growing up. He was so exciting to watch because he could score big goals and also had that toughness element. During those years when the rivalry was so huge with Colorado – those games were always also heated – he was in the mix of everything. Whether it was the physical play or having the ability to score those big goals, it was awesome to watch.”

“He was another athlete I remember from when I was growing up in Michigan. We had some really good sports teams and when the Detroit Pistons were competing for NBA championships or winning the title, he was a guy for me that was so fun to watch. It was just the way he competed throughout the entire game. He hit a ton of big shots, but he also worked hard away from the ball. He’s someone that when you watched, you couldn’t help but appreciate the effort he gave every night.”