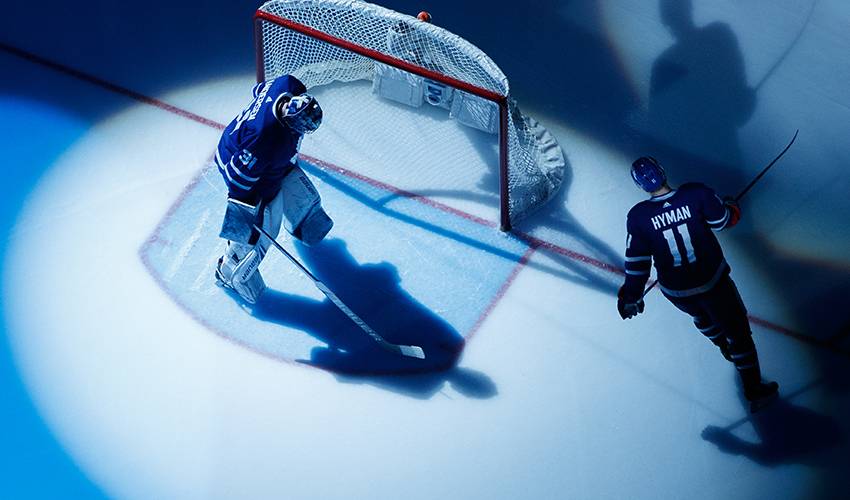 What makes Frederik Andersen the ideal teammate on and off the ice?

“I’ll start with off the ice,” began the 25-year-old Hyman, now in his third NHL season with the Toronto Maple Leafs. “He’s just a great guy and is so much fun to be around. He’s just a very caring person. He has a quiet demeanor when you first meet him, but then he opens up. He’s all about the team and helping other people.”

Andersen, who came to the Maple Leafs via trade with Anaheim on June 20, 2016, has played a major role in Toronto’s ascent in the Eastern Conference standings the past two campaigns.

This year, Andersen has already eclipsed the four shutouts he recorded last season and has 33 wins again, two shy of the career-best 35 he put up in 2014-15 with Anaheim.

“On the ice, his skill set is amazing,” praised Hyman of the six-foot-four, 230-pounder. “He is one of the best goalies in the league. He gives us confidence every time we go out there, knowing we have a chance to win no matter what because of his play.”

Selected by Carolina in the seventh round (No. 187) in the 2010 NHL Draft, Andersen made the decision not to sign – Cam Ward had solidified the No. 1 role – and remained in Europe.

Two years later, the Ducks took Andersen in the third round (No. 87) in the 2012 NHL Entry Draft. He made his NHL debut on Oct. 20, 2013, replacing Jonas Hiller to start the second period in a 6-3 win against Dallas, blanking the Stars over his two periods with 24 saves.

In 2015-16, Andersen and John Gibson won the William M. Jennings Trophy, awarded to the team that allowed the fewest goals during the regular season.

“It’s great to have him here,” said Hyman. “You really notice everything about his game. He’s athletic and he’s able to make great saves. But I think the things that stand out the most are his consistency and calm demeanor. I don’t think anything really gets to him. As a goaltender, that really works in his favour. Goalies go through ups and downs like nobody else, but seeing him stay level-headed and even-keeled is impressive.”

And so is the man behind the mask.