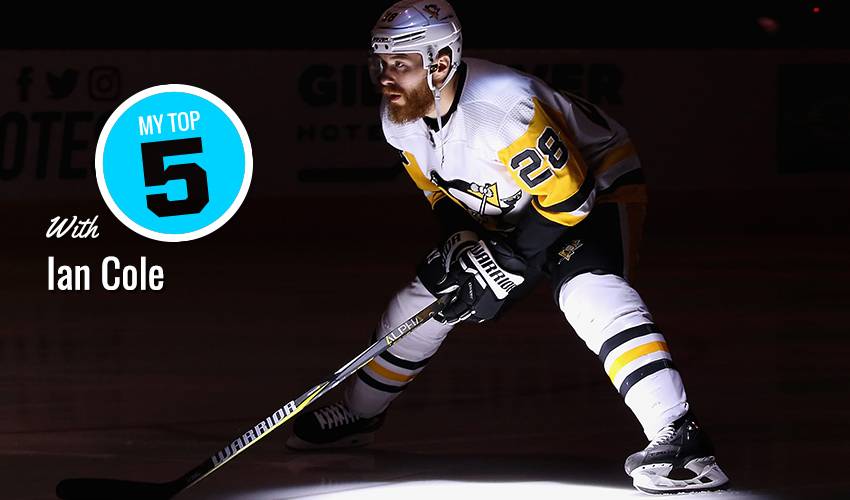 A two-time Stanley Cup champion, Ian Cole brought hockey’s most coveted team trophy back to his hometown of Ann Arbor, Michigan, to share with fans, friends and family.

The soon-to-be 29-year-old defenceman (his birthday is tomorrow) enjoys the opportunity to head back to Ann Arbor – home to the University of Michigan – during the off-season and head out to some of his favourite food spots.

Cole stopped by NHLPA.com to serve up some food for thought when it comes to the local cuisine scene.

“Zingerman’s Deli is a pretty famous place. It started out as a deli and it’s really grown from there. They have a creamery, coffee roaster, ice cream selection, and they do mail orders, too. It’s a great place. The deli is fantastic. The sandwiches are huge and really, really good. Their M.O. is that they get the best ingredients from local farms. Everything is pretty fantastic.”

“Krazy Jim’s Blimpy Burger – they’ve switched locations. It used to be in this old house, just off campus (University of Michigan), but they sold the land to the university. I haven’t been to the new location, but at the old place, you’d go in and you’d purchase the patty. If you wanted a 10-patty tall burger, you could do that. They keep it pretty standard and you just add on to it. They’re really good. I might have been 14 the last time I went and I think I had about three or four patties.”

“I brought the Cup to BTB Burrito the first year (2016) we won it. It’s a place I went to with my buddies a lot when we were in high school. Whenever we could have off-campus lunch, we’d drive there. We’d run out to BTB for lunch. At the end of the year, we’d go back and have these giant burritos they make. They were about seven or eight dollars, which is the greatest deal of all time. They’d take two tortillas, overlap them, and they’d just load everything up in the middle of the two of them. Then they’d roll them up and you’d end up with this foot-long burrito that was so thick. At the end of every school year, for three years, we’d go there and everybody would try and crush one of those giant burritos.”

“The Chop House still one of my favourites to this day, including all of the places I’ve been to throughout the country with the boys. It’s a really cool, really nice restaurant. It’s not super-formal – yes, still formal – but a little modern. They have really good steaks, unreal sides and desserts, and great wines. They have a cigar bar downstairs. Any time I’m back in Ann Arbor, I like to go there. The second time we won the Cup (2017), we had dinner in one of the rooms there with a bunch of family. I order my steak medium rare – only way to go.”

“At Stucchi’s Ice Cream, they make their own homemade ice cream. It’s been there quite a while. I was always a chocolate chip cookie dough guy when I was a kid.”