When he wasn’t busy building his hockey skills, a 16-year-old Craig Smith spent one summer helping build something else in his hometown of Madison, Wisconsin. 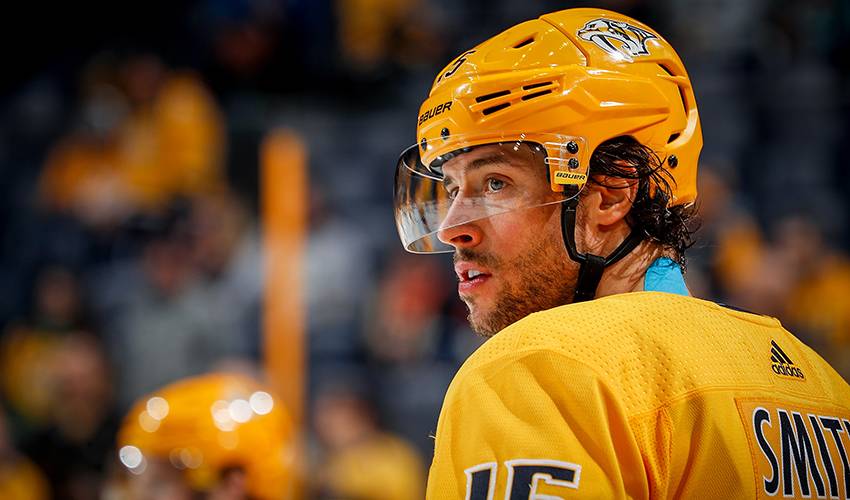 When he wasn’t busy building his hockey skills, a 16-year-old Craig Smith spent one summer helping build something else in his hometown of Madison, Wisconsin.

With the 2006 school year over, Smith figured, at least initially, that most of his free time would be spent at the local ice rinks.

The thought of a part-time job hadn’t crossed his mind. That all changed, however, after a chat with his high school hockey coach.

“I was 16 at the time,” recalled Smith. “One of my old high school coaches, Chad Stauffacher, and his brother, Luke – their family owned a construction business – and they were putting up a hotel for the summer. They had asked if I had a job for the summer and I didn’t have anything going on, so I figured I could make some money doing that work.”

While it wasn’t the traditional summer job for a young teenager, Smith embraced the tasks he was given.

“It was great,” said Smith, who is closing in on 500 career NHL games, all with the Nashville Predators. “My job was to core holes for the PVC pipe. I would be coring holes through concrete with these huge drill bits and running water through them because they were getting hot. I was on the second floor most of the time.  I was also working with another guy, Kevin Ulanski, a good hockey player out of Madison, who went on to win two championships with the University of Denver. That was pretty cool.”

The job also provided a young hockey player with some invaluable life lessons along the way.

“Chad played for the University of Wisconsin and Luke played for Minnesota-Duluth,” he continued. “At that time, I wasn’t in junior hockey yet, but I was on my way. Being around those guys and seeing how they worked – it was a great experience. We would go to work and then train after. It was a cool summer.”

It also gave Smith an appreciation for what goes into – and comes out of – each pay cheque.

“Well, I learned what taxes were,” said Smith. “I learned the value of a dollar and how much goes to the government.”

The job also taught Smith that doing the dishes and other household chores wasn’t as tedious as it felt at times.

“Dishes…that was a tough one,” he said with a laugh. “That was part of the gig growing up – my sister and I did the dishes. My dad had this record player and he would play Johnny Cash when we would do the dishes.”

Last summer, when Smith visited his parents’ home, he provided some musical entertainment at certain times each day.

“I was helping around the house, doing the dishes and things like that,” he recalled. “Any time I would do something, I’d put on Johnny Cash and my parents would start laughing.”

They also remembered that summer job Smith had a dozen years ago in Madison.

“I’m all about hard work. And working on that hotel, it really helped me in a lot of ways.”