He’s one of hockey’s top young defenceman, a blueliner that can log big minutes and deliver at both ends of the ice. In his second NHL season, Jakob Chychrun looks right at home whenever he takes a shift. 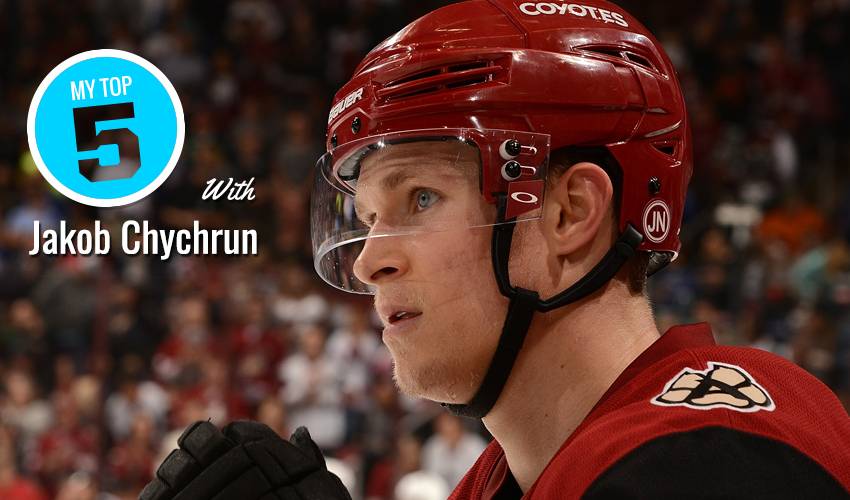 He’s one of hockey’s top young defenceman, a blueliner that can log big minutes and deliver at both ends of the ice. In his second NHL season, Jakob Chychrun looks right at home whenever he takes a shift.

As for his favourite road places to play, the son of former NHL defenceman Jeff Chychrun crafted a list that includes the place where he scored his first big-league goal and a pair of arenas that always seem to bring out the best in his game.

“We’ll go with Chicago. It’s called the Madhouse on Madison for a reason. The atmosphere there is unbelievable. My favourite part of playing there is the anthem. Everyone stands up and cheers really loud. They don’t even sing. They just cheer and yell. It really gets you fired up to play. I love playing there.”

“The atmosphere is amazing and there’s so much history in that organization. The fans are very passionate. It’s an easy place to get prepared for. You know the crowd’s going to be into it and it always helps you play.”

“It’s kind of the same thing as Montreal. It probably is the biggest hockey market in North America. It’s always electric in there as well. Whenever you to play in a market like that, it’s always fun.”

“I like playing in L.A. We play there a lot because the Kings are in our division. I think the Staples Center is really cool. It’s probably the busiest arena in the U.S. and North America with the two basketball teams (Los Angeles Lakers and Los Angeles Clippers), the hockey team, concerts and all the different shows they have going on there. That’s another cool building to play in and a cool city to visit.”

“It’s my hometown rink and I always have lots of family come to those games. It’s the rink I grew up going to. My family had season tickets to the Panthers games when I was growing up. I was probably in that building the most when I was a kid, and to play there now is pretty special, especially playing there for the first time last year.”

“I scored my first goal in Montreal. All my family was there, so it was pretty special. All my dad’s family is in Ottawa, so they drove to Montreal to see that game.”

“I always play well in Chicago and L.A. for whatever reason. I just love playing in those two arenas.”