Who made Skjei’s list? Which course would he pick to play on? And what would be on the menu at the clubhouse after 18 holes? Time to tee off with No. 76. 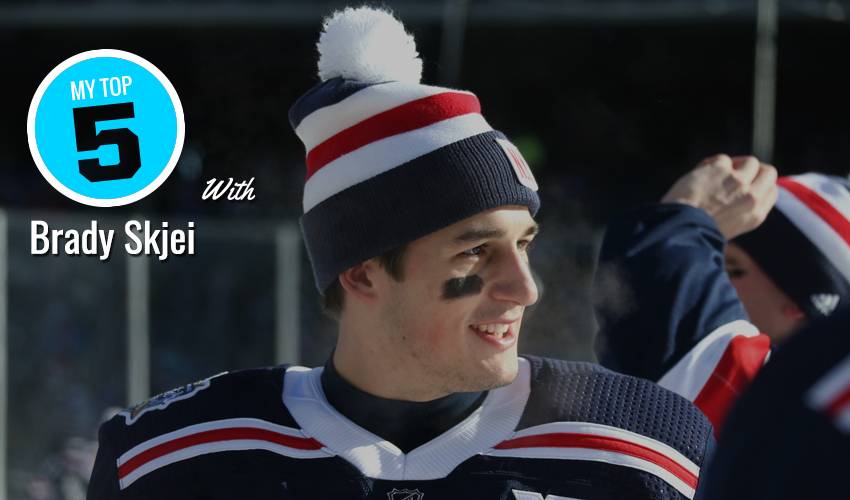 When he’s not in the rinks you can often find New York Rangers defenceman Brady Skjei on the links. The 23-year-old played golf on his high school varsity team and is, “probably a 2- or 3-handicap.”

Currently in his second full NHL season, the Minnesota native stopped by NHLPA.com to deliver his Top 5 ‘Celebrities I’d Like To Play A Round Of Golf With.’

Who made Skjei’s list? Which course would he pick to play on? And what would be on the menu at the clubhouse after 18 holes? Time to tee off with No. 76.

Celebrities Brady Skeji would most like to golf with

“I’d love the chance to pick his brain about his golf game and maybe get some tips. It would be great to have that opportunity to play a round with one of the best players in the world.”

“He’s another person who I’d like to have that chance to pick his brain about his sport and find out what were some of things he did that made him one of the best baseball players of all time.”

“I think for what he’s accomplished on the level that he’s playing at for his age is incredible. To still be in peak form in a sport that’s extremely physical and demanding – that’s something you truly respect.”

“I know he’s a really good golfer and he’s obviously been extremely successful at so many things. He seems to be a really down-to-earth guy and it would definitely be fun to play a round with him.”

“I just think the way he plays game, the way he shoots the ball – he’s made the three-pointer a much bigger part of basketball. I’d like to play him for a little bit of money because I think it would be a pretty good game to go head-to-head against him.”

“I would love to play Augusta (National Golf Club). There’s a lot of history behind it and it would bring out the best in your game.”

“If I sat down to lunch after a round with the people I chose, I’d keep it pretty simple. I’d go with hamburgers and soda. Nothing fancy.”