For Miles Wood, the hardest part about coming up with a Top 5 ‘Best Things About The World Junior Hockey Championships’ is limiting his list to just five things. 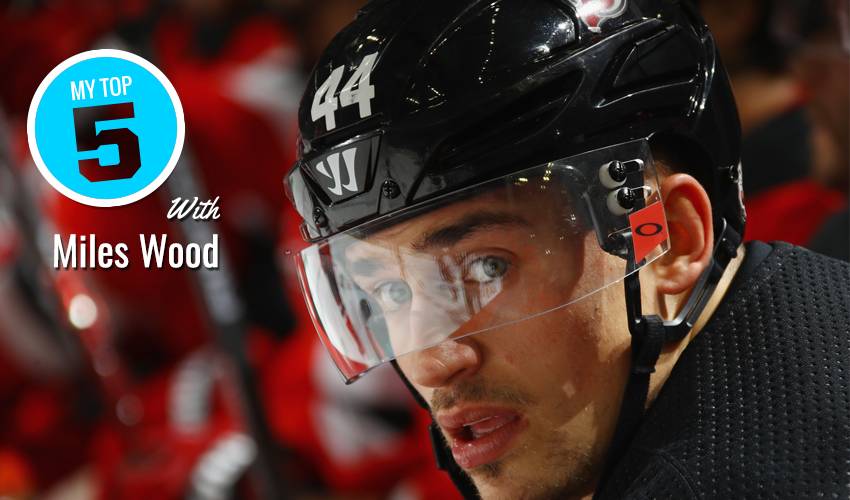 He’s played in the World Junior Championships (2015, with Team USA). He’s born in Buffalo (the site of this year’s tournament). He still tunes in every year to catch all the action.

For Miles Wood, who patrols left wing for the New Jersey Devils, the hardest part about coming up with a Top 5 ‘Best Things About The World Junior Hockey Championships’ is limiting his list to just five things.

“This is a chance to see the top kids in the world, who could be making their mark in the game for the next 10-15 years. This is where hockey fans get to see who the next big stars are. It’s on such a big stage and that’s where the talent comes out. I think that’s the most exciting part.”

“It’s great for the fans to get behind their country. It’s not just USA versus Canada. You have Denmark, Switzerland, Slovakia – all of these countries are part of it and are trying to take their best shot at winning gold. I think that’s really cool – that fans from all over the world can get behind this tournament.”

“I was fortunate enough to play in the World Juniors and the fans are just so into it. For my junior experience, the games were played in Montreal and Toronto. The fans make you feel like you’re a superstar. They’re so involved with the hockey and the tournament. The fans, away from the rink or at the rink, are all in. That was so exciting. Seeing 10,000-12,00 fans at a game, it was an amazing atmosphere. You just don’t get that anywhere else at that age.”

“Playing for your country – it’s an unbelievable feeling. You’re not only playing for your teammates, you are playing for your hometown and for an entire country. When I played at the World Juniors in 2015, that was the first time I ever wore that USA crest. You don’t get to do that a lot, but when you do, it’s certainly a great moment.”

“Getting to play against kids from around the world was a really cool experience. I went to prep school / high school and all I knew was kids from Massachusetts. It was the first time I was on a team where I was playing with guys from California, Arizona, Minnesota and other places across the country. And then you got to play against guys from all over the world. All of it was incredible. It’s such a cool tournament and something special to be part of.”