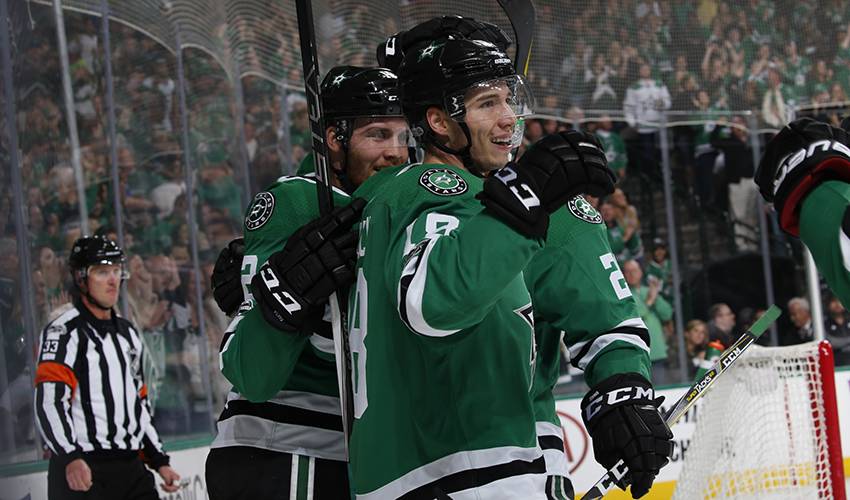 It would be understandable if the 26-year-old from Minneapolis, Minnesota might feel sorry for himself after having to contend with some serious injuries early over his NHL career. In 2014-15, the centreman missed 41 games with a lacerated spleen suffered in a game against Calgary. In 2013-14, he missed 19 games with a sprained knee.

But Pitlick, selected 31st overall by the Edmonton Oilers in 2010, has opted for a different mindset, preferring instead to channel his energy into positive thought.

“I think you just learn how to deal with things as you grow up, understanding there will be things that happen you can’t control,” said Pitlick, whose uncle, Lance Pitlick, played 393 career NHL games with Ottawa and Florida. “Whatever injury came my way, I just put everything I had into rehab and worked towards getting back as fast could.”

This July, after six seasons with the Oilers organization, Pitlick signed as a free agent with the Stars.

Any nervousness about coming to a new team playing in the same conference was quickly forgotten after a chat with team captain Jamie Benn.

“Jamie has been great,” praised Pitlick. “He’s a great person and leader. He made me feel comfortable right away. He goes out of his way to get guys together as a group outside of the rink. That was really helpful, especially getting to know all the guys early on. Jason Spezza has helped me out a lot, too.”

Pitlick also credits his linemates for his comfort level on the ice.

“I think I found a good combination with (Radek) Faksa and (Antoine) Roussel. We kind of play the same game and we work well together. That’s been huge for me.”

Does it seem like yesterday that Pitlick played his first NHL game (October 22, 2013)?

“It really has gone by quickly,” he offered. “It was in Montreal, so that was crazy in itself. The place was packed. I was nervous, for sure, when it came to my first shift. You’re looking around at all the banners and seeing all the history of the team. After that, maybe a couple of shifts in, you settle your nerves and you just play the game. It felt normal after that first shift.”

“I was really excited, but it was a very simple play,” he recalled. “I just chipped it out of the zone and I think I chipped it again around the defenceman. I tried to shoot it coming down the right side and completely fanned on it. It kind of threw the goalie off. I just whacked the puck and it trickled through his five-hole. It wasn’t a pretty one, but everyone was really happy for me. It’s almost a better story that it was a goal like that.”

He’s hoping there are memorable moments to come.

“I’m 26, but I feel like I’m 19 or 20,” said Pitlick, who scored two goals on December 31 in a 6-0 Dallas win over San Jose. “The time flies by and you don’t really know where the years go, but it’s been amazing here in Dallas. “They’ve welcomed me with open arms since the first day I got here. I just want to be out there and do what I can to contribute.”